After birding Goa quite intensively in 2002, this was to be a non-birding GOA holiday spent with my wife at the Marinha Dourada, Arpora with birding being mainly done in a relaxed manner (admittedly with scope close to hand) from the hotel balcony, from which 72 species were recorded (including 9 species of raptor).

Baga Hill from the balcony 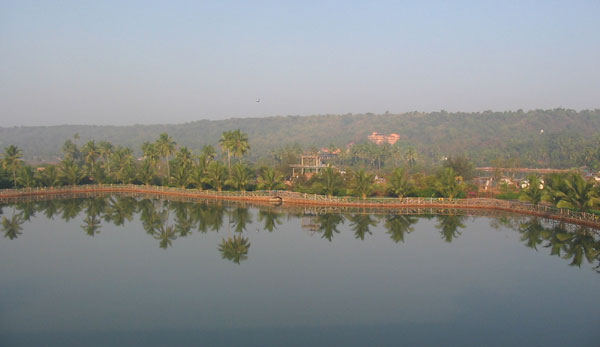 The fish/prawn ponds and surrounding fields which were directly across the road from the hotel were also walked regularly and were very productive, with several species of wader being present. Also the bushes (centre of picture) held a large roost including Starlings, Weavers, Munias and Mynas.

The ponds across the road 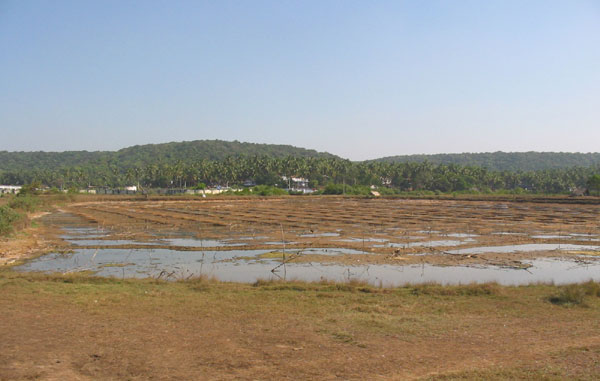 Local visits were made up Baga Hill in the late afternoon on three occasions (walking the ridge along the top just once) and to Arpora Woods twice.

Also, the Beira Mar was visited twice for the last hour of daylight in order to try and pin down Cinnamon Bittern, a species which had eluded me on a previous visit in 2002. This proved successful on the second occasion, with the added bonus of a Slaty-breasted Rail being seen as well.

A passing visit was made to Morjim for a very quick look and a few other birds were picked up elsewhere whilst travelling.

Indian Peafowl: A male and two females seen from the plane alongside the runway at Dabolim Airport

Rufous Woodpecker: One at Baga Hill

Black-rumped Flameback:* Two at Marinha Dourada and one at Arpora Woods

Indian Roller: One from the bus en route to the Airport

Black-capped Kingfisher: One on rocks at the mouth of Baga River

Greater Coucal:* Two at Marinha Dourada and one at Spice Plantation

Alexandrine Parakeet:* Up to 4 seen most days from Marinha Dourada

Plum-headed Parakeet:* 2+ over at Marinha Dourada and a pair near Sun Village

Little Swift:* Seen daily and also in the cloisters at Old Goa

Barn Owl:* One flew past at Marinha Dourada

Slaty-breasted Rail: One at Beira Mar

Ruddy-breasted Crake: One at Beira Mar

Snipe sp:* Two at Beira Mar and one at Marinha Dourada

Greenshank:*c6 at Marinha Dourada Ponds throughout

Common Sandpiper:* Common by all riversides.

Ruddy Turnstone: One on rocks near Baga River mouth

Small Pratincole: Up to six regularly at Marinha Dourada Ponds

Kentish Plover: 10+ at Morjim and Asvem

Lesser Sand Plover: 40+ roosting at Baga River mouth and also others at Morjim and Asvem

Caspian Gull: Present at Morjim and offshore from Baga and Asvem

Great Black-headed Gull: A few at Morjim and two by Baga

Brown-headed Gull: Plentiful being present at Morjim and offshore

Gull-billed Tern: A few seen along the Mandovi River

Osprey: One off the Baga River mouth

Black-winged Kite: One seen en route to the airport

Black Kite:* Numerous, with both govinda and lineatus noted

Marsh Harrier: One near Spice Plantation

Shikra:* Seen on and over Baga Hill

Western Reef Egret: Singles on rocks off Baga Hill and by Zuari River

Great Egret:*Regular over Marinha Dourada and at pools

Intermediate Egret:* Regular over Marinha Dourada and at Beira Mar

Striated Heron:* A regular at the Marinha Dourada waterfall and odd ones nearby

Woolly-necked Stork:* Up to 6 daily over Marinha Dourada and nearby

Rufous Treepie: One at Baga Hill

Black-hooded Oriole: One at Arpora Woods

White-bellied Drongo: One at Arpora Woods

Blue Rock Thrush: One on coastal rocks off Baga Hill

Chestnut-tailed Starling:* Many present in roost at Marinha Dourada Ponds

Red-rumped Swallow:* Common and the most numerous of the swallows.

Malabar Lark: One over at Marinha Dourada Ponds

Purple-rumped Sunbird:* Seen throughout and the most common sunbird