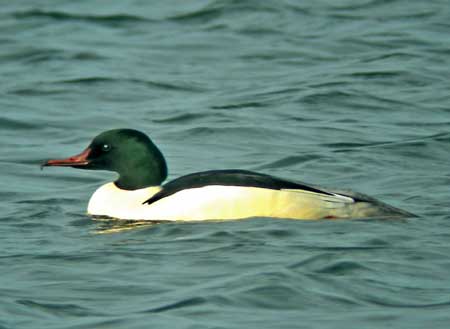 Local birder Steven Wytema was of great help, giving us plenty of information. He was kind enough to come with us on one of the days, and without his help and knowledge we would have probably missed some good species.

Pablo Fernandez Garcia, Jorge Valella and César Álvarez Laó made the same trip a week before us, and gave us some invaluable information too.

I would advise everyone to take a Tom Tom GPS navigator. It was essential, taking us to the right spot without losing any time or getting lost, which is very important if you consider the short amount of time we had to see all the species. You can find the GPS waypoints for all the species on this webpage:
http://waarneming.nl/

We arrived in Eindhoven airport at 10am, hired a small car, headed straight for Castricum, on the other side of the country and arrived there just 2 hours later! The distances in Holland are really small, so you can cover the country well in just a couple of days! We parked the car and walked for about 1.5 km until we reached the lagoon. The gps waypoint co-ordinate of the site (Noordhollands Duinreservaat - Hoefijzermeer (NH)) is 52.54 – 4.62

The male Canvasback was easily found amongst the group of Pochards. Other birds of interest were 10 goosanders, several Goldeneyes and a female Long-tailed duck. 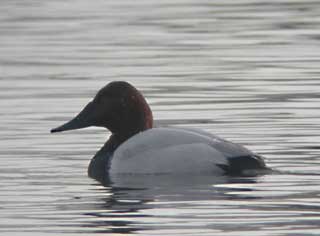 After that, we went to see the largest wintering flock of Lesser White-fronted Geese in the country, located in Pettemerpolder, NH (52.745-4.651). The area is just 30 minutes from the canvasback site, so it can be done the same day.

There were several thousand Greater White-fronted Geese in the fields there, and after some searching, we finally found the group of Greaters that the Lessers were hanging with, on the southern part of the polder, close to a small village. We counted no less than 45 Lesser White-fronted Geese. If you don´t find them there, just take the tracks that surround the area and check all the flocks until you find the right one. 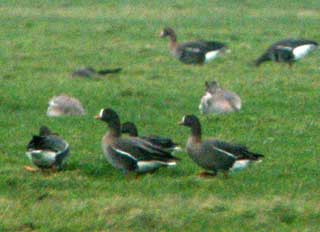 We slept at a StayOkay hotel in Haarlem, which is well situated to make trips both to Noordholland and Zuidholland. It was cheap: 23 euros per person, breakfast included. The address is Jan Gijzenpad, 3, Haarlem.

We went after the Little Bunting near Katwijk (52.216 – 4.425 ) first thing in the morning. Found it easily within a couple of minutes, hanging around with 2 Reed Buntings on the small grassy area on the left of the road. After a while, it flew to the small trees and bushes on the other side of the small ditch. We had crippling views on the trees and also near the ditch. This bunting is probably one of the 2 that over-wintered in the same spot last year. By the way, this place has become famous because of the Eastern crowned warbler that delighted many observers last autumn. 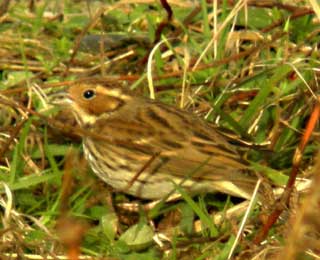 Later, we went to see the male Bufflehead at the usual spot in Barendrecht-Gaatkensplas, ZH, near Rotterdam (51.844 - 4.493), about half an hour from Katwijk. We had great views of the very obliging male. 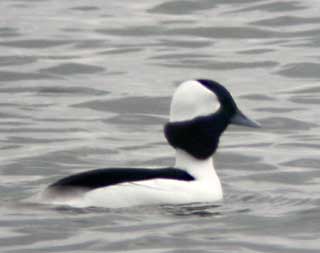 Then we searched for a reported Red-breasted Goose at 51.759 - 4.518. No luck, but no big deal as we have already seen it in Spain. Thousands of Barnacle Geese there, and also a Cackling Goose (probably minima), a Snow Goose hybrid and a Great White Egret.

Not much light left, so decided to go to the closest Bewick´s Swan spot, only 25 mins from there, at 51.968 – 4.827 We had good views of 76 Bewick´s Swans in the field to the right of the main road. We slept at the same Stayokay in Haarlem 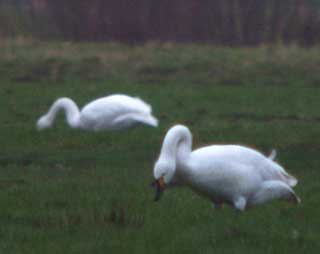 Tried for a reported Black Brant in Wieringen – Woudpolder, NH (52.885 – 4.924)
There were no brent geese on the fields, but instead we found a big group of aprox. 1000 birds a few hundred metres from that point, bathing and preening in a small beach on the bay. We found the Black Brant after a quick scanning of the group. Amongst other features, the complete white neck collar was very obvious. It was quite close and gave good, albeit brief, views, until it flew off with other brents. There were also 2 Pale-bellied Brents in the group. We checked the nearby fields until we located another big group at 52.898-4.932 We relocated the same Black Brant there, and studied it for an hour. The identification criteria of this taxon is quite controversial. In some places it´s stated that pure Black Brant don´t show contrast between the colour of the primaries and the colour of the greater coverts, though other people says there can be some contrast. On many of the pictures of Black Brant on the internet, the contrast is quite obvious though…This bird had all the features of nigricans (and was the same bird that the one seen and photographed many times on the same spot and identified as Black Brant), but showed some contrast between primaries and GCs. Therefore, I don´t know if it can be called a pure nigricans or if it´s better to leave it as an intergrade Dark-bellied / Black Brant. Anyway, a very interesting bird.

After some discussion, we went for the Hooded Merganser reported during the weekend in Flevoland. We arrived at the spot, Lelystad - Ooievaarsplas (FL) (52.426 - 5.42) and scanned the canals from the bridge. We couldn´t find the bird, though 15 Smew and some Willow Tits were nice. Went back on the same road, until the prized bird was relocated aprox. 1 km from the bridge, on the canal that runs parallel to the road, in front of a small farm. The Hooded Merganser was in a small Tufted Duck flock, and after a few minutes they all flew off. We went back to the bridge, and had good views of the bird from there. 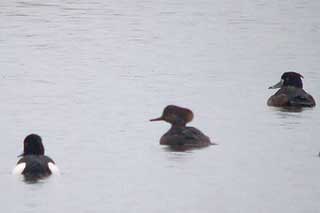 With not much light left, we decided to try for a reported Snow Goose 30 km from the Hooded Merganser site, at 52.264-5.501. There was a small flock of Greater White-fronted Geese, and within a few minutes we located the bird. Unfortunately, it soon became clear that it was not a Snow Goose, but some sort of hybrid, one of the parents being probably an Emperor Goose. The nearby lake, at 52.264-5.497 was teaming with waterfowl. Amongst many thousand Wigeon, we located no less than 48 Smew including 35 beautiful males. A nice end to a very successful trip. Darkness fell as we watched the Smew, so we decided to head towards Eindhoven.

We slept at another Stayokay hotel for 20 euros, the address being P.Heerkensdreef 20, Valkenswaard, which was just 20 minutes from Eindohoven airport.

Took the plane to Madrid, arriving there at 12:30pm. Headed north towards our homes in Asturias/Galicia, seeing 2 Black Vultures on the way. We stopped at Villafafila, where, as usual, there were good numbers of Great Bustards, as well as a couple thousand Greylag Geese, with a Pink-footed Goose (rarity in Spain) mixed with them. Just when we were going to leave, we discovered a Short-eared Owl roost, with 10 birds present. These were the last birds of the trip.

We succeeded in seeing 6 (Canvasback, Bufflehead, Lesser White-fronted Goose, Black Brant, Bewick´s Swan & Little Bunting) out of the 7 target species that were present a few days before our arrival, the only miss being Snow Goose, though the problem with this one was that we went after a bird that ended up not being a pure one. If the news had been more accurate we would have tried at another place and would have probably seen it. Anyway, we also had 2 nice bonus species in the form of a Hooded Merganser, as this bird had been missing for several weeks and was relocated during our stay, and a Cackling Goose we discovered by ourselves. A couple of birds that were also of interest to us, such as Pallas´s Warbler, were not reported during the week before our arrival nor during our stay, therefore were not real misses. A fly by, not twitchable, Ross´s Gull was seen on one of the days, but unfortunately it was not relocated.

If you have any questions, feel free to e-mail me at the following address