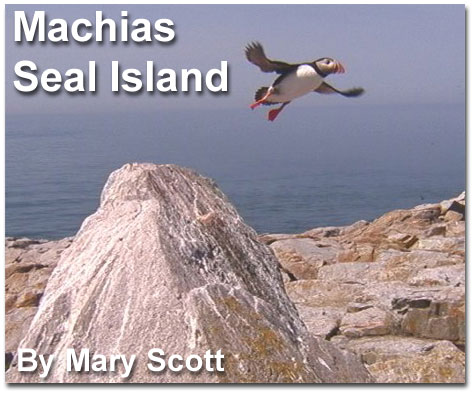 
Head protective gear required, the sound of chainsaws, it makes you think of a construction site or a clearcut, doesn’t it? How about the nesting colony of alcids and terns at Machias Seal Island? A wonderful summer birding destination, the island is offshore of the international border of the United States and Canada. It is reached by scheduled boat trips from Jonesport and Cutler, Maine, and Grand Manaan, New Brunswick. Access to the island is carefully controlled to minimize disruption of the breeding activities, but visitors are allowed to use observation blinds that are surrounded by birds.

The clownish star of the colony is the Atlantic Puffin (Fratercula artica). This is the only puffin on the east coast of North America, and its huge bright bill and penguin-like walking delight even the most casual wildlife watcher. It is the puffin that makes the chainsaw noises as it communicates around its burrows, which are dug beneath the rocks atop the island. The young begin to hatch in late June, and the parents scurry in and out of the rocks bringing fish to their helpless offspring. Puffin parents don’t worry about getting the kids to leave the burrow – they just abandon them when the time is right, and hunger forces the young birds to emerge. 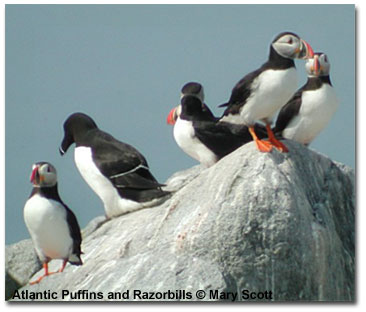 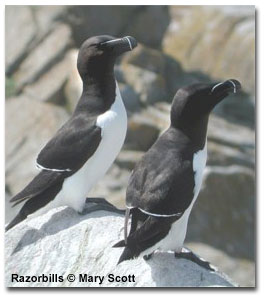 The other breeding alcid on the island is the Razorbill (Alca torda). This is another bird with a massive bill and an upright walk. But instead of flashy red, the razorbill is a study in black and white. The most interesting feature of the bird’s breeding plumage is the white line that develops from the culmen to the eye. Like puffins, razorbills also use burrows for their nesting activities, and bring small fish to their young. But, they have a more family-oriented take on the final scene. Rather than abandon the juvenile in the burrow, both parents escort the kid out to sea.

The Arctic Tern (Sterna paradisaea) is the dominant nesting tern at Machias Seal Island, but there are also small numbers of Common Terns (Sterna hirundo) sharing the island. It is the terns that protect the entire breeding colony from intrusion from gulls or humans, and they attack interlopers aggressively. A hat as well as a tripod or stick carried overhead are suggested equipment for any visit to the island. The terns nest in the grass, and their fluffy chicks start to run around days after hatching, so you must also watch where you walk. Having both tern species at close range provides an excellent opportunity to examine their subtle differences in shape and plumage as well as the obvious difference in breeding bill color. 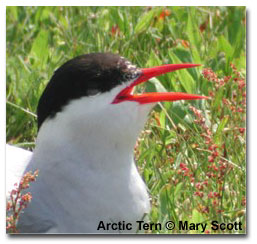 There are other target bird species for your trip to Machias Seal Island. Black Guillemots are seen close to shore as your trip begins, and Common Murres loiter on the island itself and its nearshore waters, although they do not breed there. Common Eiders do breed on the island, although you primarily see females at the height of the alcid breeding season. There are always seals about, and in late summer you can also hope to see porpoises and whales as you ply the waters to and from the island.

For a much more detailed look at the adventure and birds of Machias Seal Island, give a click for www.birdingamerica.com/Maine/machias.htm. Or, better yet, book a trip! 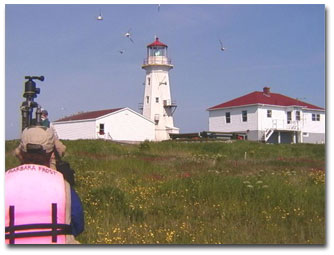 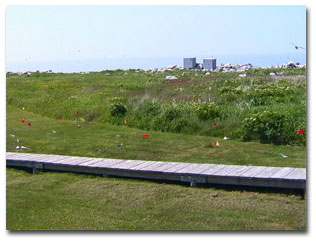