Malta is an archipelago of islands on the central Mediterranean flyway, and is of particular importance to raptors during the Autumn migration. Unfortunately Malta has a deserved bad reputation due to the illegal hunting of raptors, making the Autumn migration a worrying period for anyone interested in conservation. 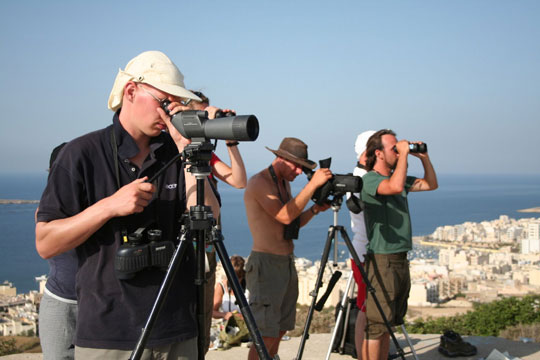 The team at Wardija, Malta

Since the late 1990s BirdLife Malta has been organising Raptor Camps on an annual basis. The purpose of these camps are two-fold; (i) to record and document bird migration over Malta for scientific purposes, and (ii) to both act as a deterrent against the illegal hunting of protected species and to report illegal activities to the police. The camps have been very successful in dramatically reducing the illegal killing of birds of prey and other protected species, as well as reporting illegal incidents to the police so that the poachers responsible are apprehended.

As a measure of what one can expect from our Raptor Camps, it is worth having a quick look at the results of our 2007 Raptor Camp, which was attended by over 65 international and local volunteers. During the camp, a total of 209 illegal hunting incidents were recorded, with 109 of these involving poachers shooting at, shooting and injuring, or shooting and killing protected species. Over 75% of these incidents involved birds of prey. The three most commonly targeted species were Honey Buzzard, European Bee-eater and Marsh Harrier. However, while illegal hunting incidents were high initially, they dramatically reduced as poachers became aware of our presence and the fact that we had good communications with the police and were equipped with cameras and video recorders. The number of protected birds with gunshot injuries brought into the BirdLife Malta office (which is always a good indication of how bad the situation is in the countryside), dropped significantly while our teams were in the field, highlighting the very tangible results of our camp. 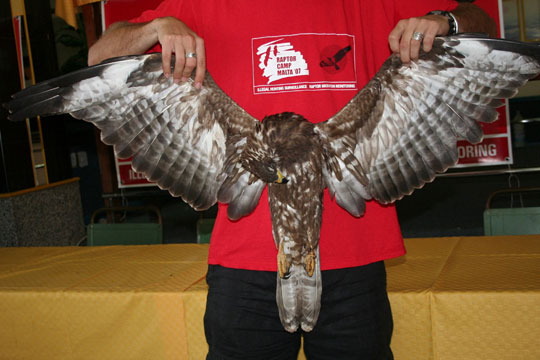 Bird migration was also good over the two week period, with a total of 75 migratory species recorded, including 20 different species of raptor. Large numbers of birds of prey were seen at our key observation points, with a total of 1,818 recorded at the Buskett observation point alone. The most common raptor species were Honey Buzzard and Marsh Harrier, and large numbers (upwards of 250 individuals) of these and various Falco species congregated in Buskett on several occasions. During afternoon roosts, these magnificent birds pass low overhead, affording camp participants with stunning views of Honey-buzzards, Marsh Harriers and Hobbies. For the full results of the camp, download our Raptor Camp 2007 report at http://www.birdlifemalta.org/photos/otherfiles/254.pdf.

While illegal hunting has decreased in Malta in recent years, a strong presence in the countryside is important to make sure it continues to decline. Raptor Camp in Malta will this year (2008) be held from the 13th of September till the 28th September. Local and international participants will work together to monitor raptor migration and to deter and record illegal hunting incidents. The focus will be on birds of prey and the autumn can bring in large numbers of a range of species. These include Honey Buzzard, Marsh Harrier, Montagu’s Harrier, Common and Lesser Kestrel, European Hobby, Red-footed Falcon, Osprey and Black Kite. Rarer raptors include Pallid Harrier, Hen Harrier, Eleanora’s Falcon, Short-toed Eagle and Lesser Spotted Eagle. These birds migrate over Malta during the day and as night falls, many will attempt to roost in woodland areas on the island. Apart from raptors other migrants include European Bee-eater, Turtle Dove, Golden Oriole, hirundines, Black and White Stork, Purple Heron, Night Heron, Squacco Heron and Common Crane.

The 2008 Raptor Camp will include both morning and afternoon observations, as well as occasional night work to protect large roosts of raptors or to monitor the illegal use of electronic bird callers. Observation teams will observe bird migration and illegal hunting incidents from designated vantage points or in mobile units.

This is an excellent opportunity for anybody interested in serious conservation work to really make a difference. It is an immensely satisfying experience to see raptors safely leaving an area where you know that, without your presence, it is more than likely they would never have survived. It is for this reason that we need as many volunteers as possible, to make sure that we have a strong presence in the countryside, and that our migratory raptors safely continue their onward journey to Africa. We want Raptor Camp 2008 to be the largest camp yet, so visit www.birdlifemalta.org for more information or contact raptorcamp@birdlifemalta.org 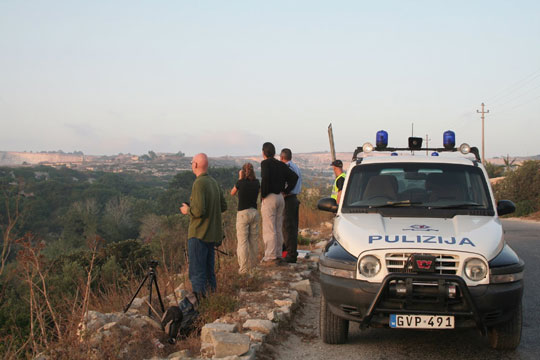