I was awoken at dawn by the sound of hummingbird wings. Gaining consciousness with unaccustomed speed I realised that I was back at Rancho Naturalista in Costa Rica, and that the hummers were already hurtling around the feeders on the balcony outside my bedroom window.

I had originally visited RN in April 2007 (readers will find it helpful to look at my Surfbirds report about that visit, which you can find by searching Surfbirds, Rancho Naturalista, Richard Sutton). In October 2008 I decided to return for a week, 14 – 21 October, in order to delve more deeply into some of RN’s more difficult forest birds and in order to take some day trips away from RN to other top birding areas, notably La Selva Research Station, Tapanti National Park and Volcan Irazu. I also wanted to see how close I could get to Cerro Silencio, the forested massif within sight of RN that is noted for its coveted birds.

I was assisted enormously throughout the week by RN’s head guide Herman Venegas together with his wife Jennifer who is herself an accomplished birder.

As with my original visit, I found RN an excellent place to stay, with extremely comfortable accommodation and scrumptious food cooked by the able chef Enrique. He has learnt many recipes from Kathy, herself a cordon bleu cook.

My stay was at the end of RN’s low season: for several days I was the only guest. The weather in October is normally good, but 2008 saw a tropical cyclone pass through bringing some cool days and nights with a fair amount of cloud and rain. However birds were plentiful: this was their post-breeding season, and overcast conditions actually stimulated bird activity.

Black-headed Nightingale Thrush © Michael Woodruff.
Seen and heard singing in April 2007 but not in October 2008

On this visit to RN I saw about 150 species at or close to the reserve, including many not seen in April 2007. Herman, Jenny and I spent considerable time trying to find some of the tougher birds, often with tapes, in most cases with success. The one that we really spent some time trying for but which eluded us was the Thicket Antpitta. We heard several including one calling just 10 feet or so from us, but the thickets it liked were, well, too thick. It’s a very hard bird to see at RN, and is probably easier to see elsewhere. Otherwise we did fairly well.

Best birds seen on or close to the reserve were:

White-throated Crake. 1 seen feeding one lunchtime at a pool below the lodge balcony. This bird was being seen every few days.

Purplish-backed Quail Dove. On Oct 18 we heard 4 calling birds and eventually spotted one sat motionless on the forest floor, before it walked off. Another guide saw a bird on the same day.

HUMMERS. These are my favourite birds. Being of a certain age, I dubbed them Herman’s Hermits. I saw 16 species at RN. The commonest were Green and Stripe-throated Hermits, Violet Sabrewing, White-necked Jacobin, Brown Violet-ear, Green-breasted Mango, Crowned Woodnymph, Rufous-tailed Hummingbird and Green-crowned Brilliant. Less common ones were:

Band-tailed Barbthroat. 1 seen Oct 18 in the upper forest on territory.

Violet-headed Hummingbird. 1 feeding on Verbena bushes by the lodge Oct 20.

Black-crested Coquette. Uncommon and local in its range, this is one of the most sought-after species at RN. We saw 1 sub-adult male twice on Verbena bushes in the garden of Kathy’s bungalow. She had previously seen the bird there on several occasions.

Green Thorntail. This lovely bird was a regular on the Verbena bushes by the lodge.

Snowcap. Once again RN delivered the goods. Two pairs were frequenting the forest feeders every time I passed by, and a female fed regularly next to the lodge. This wonderful bird is tiny, but its white crown glows so brightly that you can always pinpoint its head even in the dimmest light.

Red-footed or Bronze-tailed Plumeleteer. Reliable at the forest feeders. 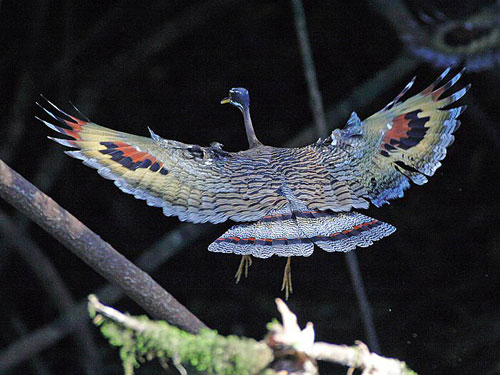 Spotted Barbtail. This is a higher elevation species that had not previously been observed at RN. Herman detected one in the upper forest on Oct 17. The reserve list is now 354.

Dull-mantled Antbird. Partial to forested ravines in a narrow altitudinal belt, one responded well to a tape on Oct 16 and came so close that I could see its tongue as it called.

Immaculate Antbird. We saw a family party of 5 on two occasions in the upper forest.

Spotted Antbird. One taped in on my final pre-breakfast walk on Oct 21.

White-throated Flycatcher. This highly localised species occurs at Platanillo marsh, just a couple of miles from RN. We saw one there Oct 16 perched on a fieldside wire.

Tawny-chested Flycatcher. Continues to inhabit the same patch of forest on the edge of the clearing by the lodge building and remains fairly easy to find. 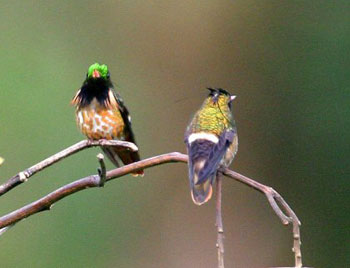 WHISTLING IN THE DARK. Searching for the Whistling Wren was a particularly memorable experience. This bird is hard to get, though you can hear it whistling distantly in the forest from time to time. To see it, Herman, Jenny and I crouched with dripping waterproofs on a muddy trail as a rainy dusk turned murkier and murkier. We heard a bird calling as it approached up the side of a ravine. It then dropped onto the trail. Herman illuminated it with a spotlight as it walked across the trail towards a wet earthen bank where it had excavated a 3 foot tunnel. Bobbing its rear like a Spotted/Common Sandpiper, it nipped into the tunnel and disappeared. According to Herman the bird regularly used the tunnel for roosting, but he did not yet know if it bred there. This was a weird wren!

CERRO SILENCIO. On 18th October we drove for 25 minutes from RN along the slow road to Cerro Silencio, or Silent Mountain. As I mentioned in my previous report, this is a high massif containing tracts of pristine forest and some outstanding birds. As I could see when we scouted the area at the end of the road, it is a very tough climb, and I only felt able to climb a few hundred feet. The base area comprises a stream, pastureland and both mature and secondary forest, some of which has regenerated rapidly over the last few years: 20 years after a streamside slope was being grazed by cattle, it now has healthy forest. Even though we only got there at 2pm, we still saw some interesting birds: a Sunbittern, forced off its usual feeding areas by the swollen waters of the stream, was walking along the road in front of us; and we also saw Crimson-fronted Parakeet, Golden-bellied Flycatcher, Bay-headed and Black and Yellow Tanagers and a beautiful male Scarlet-thighed Dacnis. We also heard Black-breasted Wood-Quail. 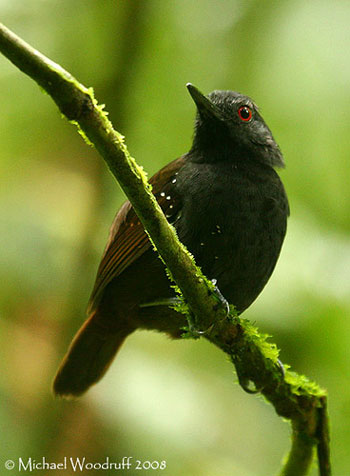 THE DAY TRIPS. Each of these journeys normally takes about 2 hours each way, though the one to La Selva, which we did on a Sunday, took just over an hour and a half each way

LA SELVA. This famous Research Centre lies in the Caribbean lowlands about 90 feet above sea level and is linked by a zone of protected forest corridor to the higher-elevation Braulio Carrillo National Park. There are good facilities for visitors: 40 miles of trails, some constructed of concrete, accommodation and a canteen-style restaurant. It was much hotter and more humid than RN. A competent bilingual guide based at the Centre joined us for the morning. He reckoned that the best birding finished by about 11 am, but we found good activity till 12 pm.

For day visitors the gates do not open till 8.00am. However we made a point of getting there early and spent very profitable time birding the approach road, which ran from the main road to the gates and which was well forested on both sides.

We missed 2 fairly regular birds – Semiplumbeous Hawk and Great Potoo – which had gone AWOL from their sites. 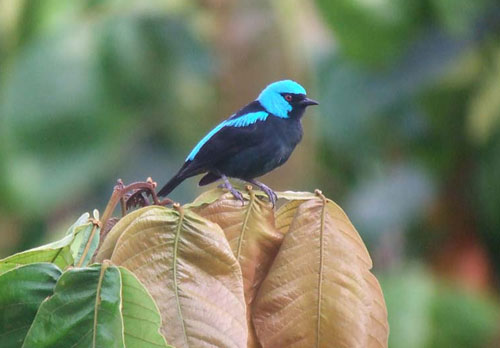 VOLCAN IRAZU. One of the mightiest of Costa Rica’s central chain of volcanoes, Volcan Irazu hangs high above San Jose. There is a good road running to the summit at about 11,000 feet that passes through odd patches of forest before reaching the high-elevation National Park where the vegetation is reasonably intact. As with all the volcanoes in this region, Irazu is notorious for bad weather closing in during the morning, but we were blessed with a glorious half day up there. Admittedly my progress on foot was limited to lurching along in slow motion: my doctor had advised me not to go above 8000 feet, but, heck, I was birding.

Since we visited Volcan Irazu, there has been major volcanic activity at Volcan Poas, which is not all that far away. Poas was a popular stop on the birding circuit, and Irazu may now replace it.

Both La Selva and Volcan Irazu are closer to San Jose than to RN, so you could use San Jose as your base. Personally, however, at the end of each day trip I eagerly looked forward to the return to RN – its surroundings, its comfort and food, and its desirable temperatures. 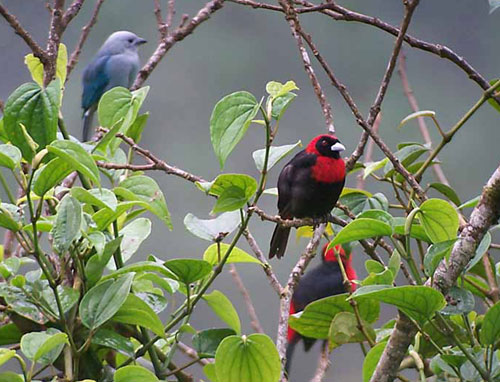 THANKS to Lou Hegedus, Michael Woodruff and Richard Garrigues for their excellent photographs, and to you for reading this report and for giving me an excuse to relive happy memories by writing it.