This was a three week family holiday with my (non-birdy) wife, Gerda to see our daughter, Heidi who had moved to East Ballina on the east coast of Australia in September last year to join her partner Mat who is working as a mining engineer there. This was our first visit to Australia and although we usually like to travel and explore new places, the family element and the wonderful countryside, birds, people, beaches and overall ambience resulted in us simply enjoying the local area. Even so I managed to see 164 species – of which 118 were new to me.

As stated we didn’t go very far. There was enough to do and see around Ballina to keep me happy bird-wise. The Richmond River flows past the town and Heidi & Mat’s flat overlooked North Creek, one arm of the estuary (I saw 72 species from their balcony). The south shore is a nature reserve, accessible by ferry, and unspoilt; the sandy beaches either side of the river mouth go on forever and are packed with Crested, Common & Little Terns. Indo-Pacific Bottle-nosed Dolphins feed in the river and out to sea you can see up to a dozen pods of the larger Bottle-nosed Dolphins at any one time. We were too late for the migration of Humpback Whales and were told this was a “poor” time of year for pelagics so no boats were running. As most days there were flocks of Wedge-tailed Shearwaters feeding off the river mouth (especially after rain), with occasional Fluttering and Streaked amongst them and a steady passage of Pom and Arctic Skuas, I was happy enough seawatching from the shore anyway. A single Brown Skua, Lesser Frigatebird and occasional Common Noddies added variety.

There is a nature reserve in Ballina itself but I had trouble finding it and was plagued by mosquitoes when I did so I moved on. There are nature reserves and parks everywhere and I visited several in the Lismore area to the west (eg. Nightcap National Park, Wilson Park NR, Rotary Park NR), the Broadwater National Park and Bundjalung National Park near Evans Head to the south and to the north the Cumbebin Swamp NR at Byron Bay. All these were only a short driving distance away and the furthest we ventured inland was to Mt Warning National Park and Crams Farm at the Clarrie Hall Dam near Murwillumbah to the north west.

Okay so it was hot! We knew this was going to be the hottest and the wettest time to visit but our annual leave timetable wasn’t flexible enough to allow us to do anything about it. In the event, although temperatures were in the low 30s and it was rather humid, it didn’t rain more than a couple of times (apparently it made up for this after we left!) and it wasn’t too hot to prevent me walking all day long. ‘Mad dogs and Englishmen’ and all that: my family might have felt otherwise but I took advantage of this to maximise my birding time (dawn to dusk) - even if my feet did swell up a bit and early nights were the order of the day. 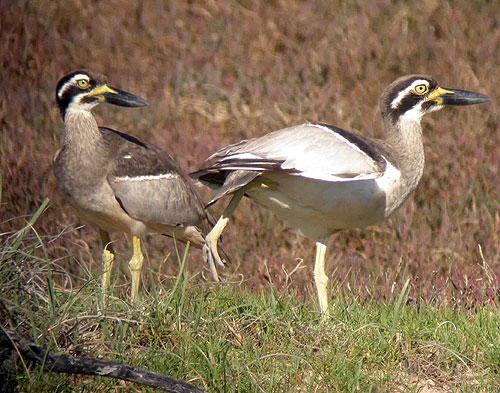 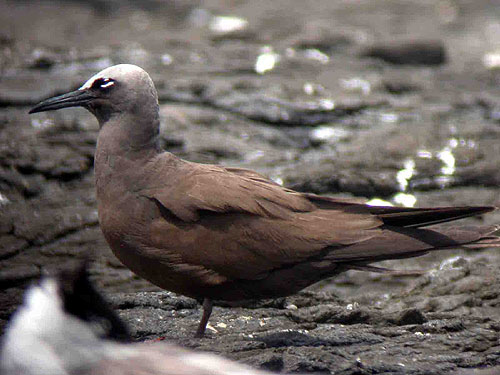 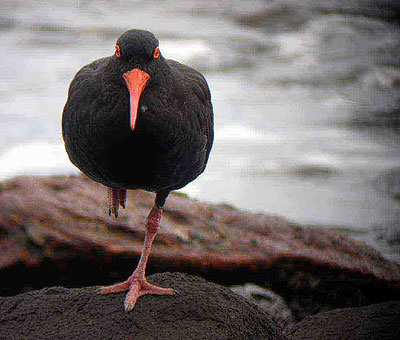 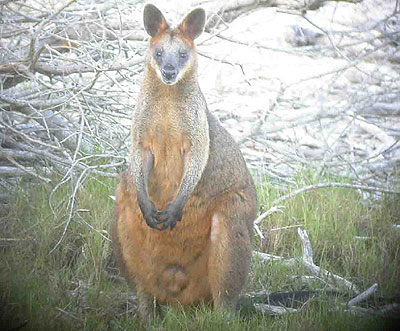 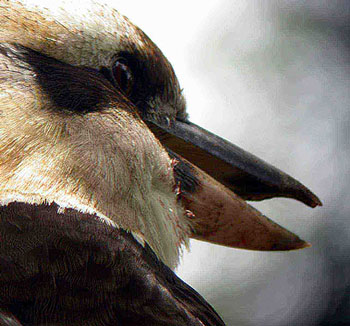 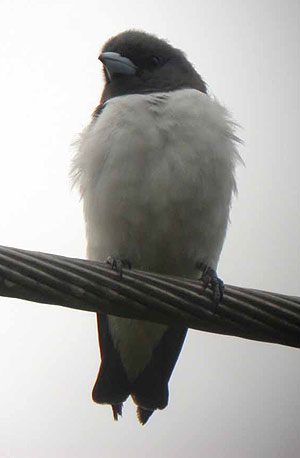 Australian Brush-turkey: Seen on four dates with max 12 @ Mt Warning on 3rd. They were seen scavenging around picnic areas at Broken Head NR and Byron Bay.

Brown Quail: Up to 8 along dirt road at Richmond River NR on several dates included adults with a chick on 27th.

Wedge-tailed Shearwater: Daily anywhere off the coast. At Ballina flocks were feeding at the river mouth, especially following heavy rain when the discoloured river water attracted up to 2-300 birds quite close inshore. At Cape Byron there were c500 on 23rd.

Streaked Shearwater: A single bird off Ballina 1st & 2nd may have been the same individual.

Lesser Frigatebird: Adult female lingering off the headland at Ballina on 1st gradually drifted off north over Angels Beach.

Australasian Darter: Seen most days around the Richmond River but no more than 6/day.

Pied Cormorant: Common. Up to 300/day and nesting colony in trees at Richmond River NR.

Little Black Cormorant: Daily Ballina with up to 95 on 5th along Richmond River.

Dusky Moorhen: On freshwater ponds and lakes with max 25 @ Clarrie Hall Reservoir and 10 in Murwillunbah on 3rd.

White-necked Heron: Only one seen – fields near Bicentennial Gardens, Ballina on 1st.

Eastern Great Egret: Only a few seen. Max 6 in the Ballina/Richmond River area.

Intermediate Egret: Up to 3 in the Richmond River/North Creek area.

Eastern Reef Egret: Seen on four dates around the coast. Only 2-3 birds involved.

Grey-tailed Tattler: Seen five dates along the coast with max 5 on 17th & 20th.

Terek Sandpiper: Up to 18 in the North Creek/ Richmond River area.

Sharp-tailed Sandpiper: At the high tide roost @ Chickiba Lake, Ballina there were 5 on 24th & 10 on 1st. There were 14 on the Richmond River on 5th.

Sooty Oystercatcher: Seen most days Richmond River/North Creek area and also at Flat Rock but no more than 5/day.

Brown/South Polar Skua: Single off Ballina Head 2nd was either a S.lonnbergi or South Polar.

Common Tern: c300 mostly immatures but with adults in full winter plumage in the Richmond River-Flat Rock area around Ballina and others along the coast elsewhere. I was puzzled by these and am very grateful to Trevor Ford and Jill Dening for help with the ageing and identification of this race, S.h.longipennis.

Little Tern: Probably >400 in the Richmond River-Flat Rock area around Ballina (count of 260 @ Richmond River & North Creek alone on 20th) included at least six individuals with all yellow bills. Four of these were ringed/colour ringed but I was unable to read the ring numbers or ascertain the colour combinations precisely. Wondering if they were (vagrant) Fairy Terns I sent my photos to Jill Dening and am grateful to Jill for her confirmation that they were all just Little Terns. Probably <1% of the adult summer plumaged Little Terns I saw had all-yellow bills, the rest showing black tips (as in Britain). There were many still in winter plumage with dark bills so it is uncertain what the overall percentage of all-yellows: yellow & black will be later in the year here. Jill was able to establish those I photographed were of the Northern Hemisphere, not the Australian race.

Common Noddy: One fishing at mouth of Richmond River 20th, one Flat Rock 24th, two there next day when one also over our flat in East Ballina, one at South Ballina beach 28th.

White-bellied Sea-Eagle: Seen most days in the Richmond River/North Creek area with up to 5/day.

Nankeen Kestrel: Three only: one near Coraki 22nd, Ballina and Cape Byron on 23rd.

Feral Pigeon: Mercifully few. No more than 30/day and only seen in a few towns. A flock of c25 are in East Ballina.

Spotted Dove: Widespread in small numbers. Up to 15/day.

Glossy Black-Cockatoo: A group of three flew north across Richmond River at East Ballina on 24th.

Galah: Seen most days, often in pairs. A few small flocks with one of 40 at East Ballina 25th.

Little Corella: A flock of 130 along North Wall, East Ballina when we arrived gradually declined to only a few by the end of our stay. They would be seen regularly flying inland in a southwest direction beyond North Creek to presumably feed elsewhere.

Sulphur-crested Cockatoo: Single flock of 12 at Nimbin Rocks on 19th.

Rainbow Lorikeet: Common and widespread, the most commonly encountered parot/lorikeet. Up to 400/day.

Scaly-breasted Lorikeet: Always a couple of pairs around the flat in East Ballina. Few elsewhere.

Crimson Rosella: One flew across the road whilst we were en route to Mt Nardi on 19th.

Eastern Rosella: Seen daily but no more than 10/day and often only two/day.

Southern Boobook: Single by roadside at Mt Warning NP 3rd flew off into trees and one dead on the road at Ballina NR next day.

White-throated Needletail: Up to 100 around Ballina most days and a flock of 230 at Lennox Head 3rd.

Azure Kingfisher: Single on creek at Richmond River NR and another in rainforest at Cumbebin Swamp NR, Byron Bay on 2nd.

Laughing Kookaburra: Seen on most days (even on our balcony!) with max 12 at various locations 3rd.

Rainbow Bee-eater: Seen on 11 dates with the largest flocks of 52 over our balcony 28th and next day with 45 over Richmond River NR on 6th.

Sacred Kingfisher: In the Ballina area there were two @ North Creek, two Lake Chickiba and one @ Richmond River NR - all seen many dates.

Striped Honeyeater: A single bird at Richmond River NR 28th with three there next day.

Little Friarbird: 10 at the (northern) park entrance to Bundjalung NP on 4th.

Brown Honeyeater: Seen six dates but no more than 15/day.

Rufous Whistler: Female @ Richmond River NR 27th with five (including a male) there next day.

Rufous Fantail: Two @ Wilson Park NR, Lismore 18th, one in Bicentennial Gardens, Ballina and six in Cumbebin Swamp NR, Byron Bay on 2nd with one there 6th and one @ Bundjalung NP on 4th.

Willie Wagtail: Widespread but no more than 5-10 day. 15 at various sites on 5th.

Spectacled Monarch: An immature in a mixed flock with above species @ Cumbebin Swamp NR, Byron Bay on 6th showed well along road.

Magpie-lark: Daily in small numbers but 50 seen on 19th at various locations.

Spangled Drongo: Seen most days but usually only 1-3/day. 8 on 18th were max. recorded.

Australasian Figbird: Seen daily. Up to 50-60 around our flat in East Ballina.

Green Catbird: Single bird on 22nd at Rotary Park, Lismore was a surprise.

Black-faced Cuckoo-shrike: Daily but 8/day was the max count.

White-breasted Woodswallow: Seen most days with max 20 on 20th.

Grey Butcherbird: Two Richmond River Birdwing Gully, Lismore and another two at the “Koala Reserve”, Broadwater 22nd. Four @ Cape Byron 23rd and one at Chickiba Lake, Ballina next day. One @ Broken Head NR 1st, one from our balcony East Ballina 2nd and one at Ballina NR 4th.

Pied Butcherbird: Widespread. Up to 50/day.

Welcome Swallow: Up to 150/day when we first arrived but fewer thereafter.

Fairy Martin: Seen on three dates with max 10 on our first day.

Australian Pipit: One near Lismore 22nd and three near Lennox Head next day.

House Sparrow: Not many - thank goodness! Only recorded on six dates and max was only 10 on 23rd.

Red-browed Firetail: Recorded on seven dates in various locations. Up to 10/day on two dates.

Silvereye: A few seen on nine dates at various localities but no more than 10 birds/day.

Common Myna: Recorded five dates in different localities but no more than 6 birds/day.

Common Bottle-nosed Dolphin, Tursiops truncatus: Hundreds all along the coast.

Lace Monitor, Varanus varius: Only one seen - at Byron Bay on 23rd but a real monster.