This trip report is based on some very informal birding in the Manzanillo area of Colima, Mexico. This might better reflect what a visiting birder with family commitments might expect to see in a limited time rather than a true birding trip. Steve Howell's Guide to the Birds of Mexico and also his Bird-finding Guide were invaluable. Please see the bottom of this report for more details about these books.

In comparison to the real tourist areas such as Acapulco and Baja, Manzanillo on the Pacific Coast is relatively under-developed from the tourist point of view, which could be seen as a good thing. There are plenty of good hotels to choose from and the airport is only 30 mins away. We flew Aero California and stayed at the Karmina Palace Resort. Most of the birds mentioned below were seen around the extensive hotel grounds. 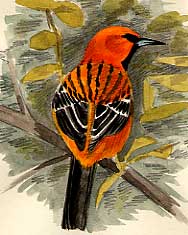 Birds were plentiful around the hotel. A walk around the hotel golf course produced fantastic views of Yellow-crowned Night Heron almost immediately I stepped onto the course. Pairs of Social Flycatchers were noisy companions and a pair of Ruddy Ground Doves sat obligingly on a wire, allowing me to sketch them. Plain-capped Starthroats and Broad-billed Hummingbirds were also easily seen. I disturbed a pair of Streak-backed Orioles from a palm whilst they were feeding a young Bronzed Cowbird. I also saw one Black-vented Oriole here too. Other common birds included; Yellow-winged Caciques, White-collared Seedeaters, a few Ruddy-breasted Seedeaters and many Golden-cheeked Woodpeckers. A Northern Jacana nervously picked its way across one of the greens, calling continuously to its mate in a nearby lilly pond, showing off its ridiculously long feet. Another nice bird to see was Mangrove Swallow. There were a pair of these with the Barn Swallows, often stopping to rest on the greens. Whilst enjoying the swallows, a Ringed Kingfisher shot over calling loudly. They really are big birds!

A pair of rather non-descript, greyish, grosbeak-like birds eventually revealed themselves as Greyish Saltators and some movement in a nearby tree turned out to be a Ferruginous Pygmy Owl, bobbing its head and tail nervously.

Back to the hotel and the seabird action was heating up on the beach. Magnificent Frigatebirds and Royal Terns were plentiful and soon a couple of Brown Boobies joined the action, cruising up and down the beach, occasionally breaking their flight path for a dive.

Back out around the hotel grounds to see if I could see anything different. Much the same species as the other day started me off, although I had much better views of Streak-backed Oriole this morning. I also added a pair of Great Kiskadees to the trip list, making a nice comparison with the smaller- billed Social Flycatchers hanging out nearby. Sulphur-bellied Flycatcher also popped up nearby making this a good large flycatcher morning. A fine Cinnamon Hummingbird was now perched on a bush where I had a Broad-billed the day before and a Rufous-backed Robin showed very well on the grass under the trees allowing me to study it in some detail.

I headed out towards the beach and on the way added a Tricolored Heron and a pair of Wood Storks flying over. I saw the Jacanas again and some movement in a nearby bush that I thought would be a Great-tailed Grackle turned out to be a Groove-billed Ani! This bird had been on my "wanted" list for some time, so I was very happy to watch this and another bird nearby at some length. The Mangrove Swallows were still present and I was able to note their white outer tail feathers in addition to their diagnostic white rumps, looking for all the world like Eurasian House Martins.

On our last day, a few new birds revealed themselves. Stripe-headed Sparrow seemed very common and I was surprised I hadn't seen them before. Also Black-vented and Streak-backed Orioles showed themselves well.

The airport marshes are, coincidentally enough, very close to the ariport. On the way back it is worth checking in early and walking the short distance back to the marshes. That is precisely what I did. The pools were full of birds. Wood Storks, Roseate Spoonbills, White Ibis, Little Blue Herons, Egrets galore. A pair of Tropical Kingbirds sat on a roadside wire and Purple Gallinules stepped their way through the reeds and a Black Vulture silently soared over sending the herons into a bit of a panic.

I wish I had more time here and the area is definitely worth a proper birding trip. Read Steve Howell's Bird-finding Guide and it should whet your appetite!