This report covers a trip made by myself along with my wife Linda, 4 year old son Brent and brother Richard. It was primarily a birding holiday but also encompassing costal sites suitable for Linda and Brent to enjoy

28/12 Arrive Mexico City at approx 18.00, collected the hire car and tried to drive to the hotel. After being beaten by the road system, we arrived back at the hire car office two hours later and asked to be guided to the hotel.
29/12 After a good nights sleep and a hearty breakfast we left the hotel at about 8.00. We drove to San Blas arriving at about 19.30, a total distance of 850Km. The route we followed was via Queretaro, Salamanca, Guadalajara and Tepic. In hindsight we should have taken highways 55 and 15 from Mexico City to Guadalajara.

01/12 Am, El Cora road with a brief stop on the coast on the return to San Blas. Pm Huaristemba road.

03/12 Am, road near Tecuitata. Retuned to San Blas for lunch, before driving to Mazatalan, which took about 4 hours.

04/12 Did not wish to leave Linda alone all day as Brent was ill with a stomach bug (we think we brought this with us from the UK, as several of Brents school friends had been ill before our departure). Am, drove to Km 285 along the Durango Highway and birded a track which ran through an area of Thorn scrub. Returned to hotel around midday. Pm, the intention was to find some decent habitat outside of town, but we discovered the car had a puncture. By the time this was repaired, we only managed about half an hours birding in some unproductive habitat near the collage.

05/12 Left the Hotel at about 4.00 and arrived at Rancho Liebre Barranca for dawn. The journey took about two hours. Spent the whole day around the Barranca, leaving just before dusk.

06/12 Left the hotel at about 4.00 for a return visit to Rancho Liebre Barranca, returning to Mazatalan early pm. Spent a couple of hours birding from the promenade.

07/12 After an early breakfast and a check of the gulls from the promenade, we headed for Autlan, arriving at about 17.00.

08/12 Arrived at Puerto los Mazos, about 1.5 hours before dawn, returning to the Hotel at about mid day, feeling very ill. Drove to Colima in the afternoon.

09/12 Spent the day in bed (and on the toilet) as I had caught the stomach bug which Brent had been ill with a few days previously.

10/12 Arrived at La Cumbre about 1.5 hours before dawn. The only night bird sighting was of Tawny Collared Nightjar, which Richard gripped me off with whilst I had to make yet another dash to the toilet. Spent the afternoon around the hotel, returning to La Cumbre at dusk on another unsuccessful nightbird hunt.

13/12 Arrived at La Cima just after dawn on a bitterly cold morning. It was so cold that we did not leave the car for two hours. Spent a couple of hours at Cuernavaca, late morning before returning the Hotel. Drove to Mexico City for our 21.00 departure back to the UK.

Mexico City: Hotel Sevilla - Pre-booked from UK, very plush at 880 peso for 1 room with 2 double beds. We were led to believe this was close to the airport, in fact it was in the City Centre. There is a Hotel at the airport appropriately called Hotel Aeropuerto.

Autlan: Motel Autlan, 200 peso for 1 room with 2x double beds. (One of the cleanest and best value for money hotels we stayed at).

Colima: Hotel America, 468 peso for 2x double rooms. This was the worst value for money hotel, until we were moved into the executive room after complaining - After our first night we found a rat in our room, which eventually became trapped in the toilet, we were moved to a second room where we found cockroaches. We were then moved into the executive room, which was extremely plush, at no extra cost. We only stayed here because the LPG stated there was a swimming pool, but this is not for general guests use.

Cuernavaca: Hotel Papagayo,(mentioned in LPG) 490 peso for 2 x double rooms. Basic, shabby and the only hotel we stayed at without TV.

The car hire, with Budget, was arranged from the UK. It cost about
Climate

The whole trip was dry and mostly sunny except for: overnight rain on a single night in Colima and mist/drizzle on the morning visit to La Cima. The last two days were very windy, with several dust storms on the journey from Guadalajara to Mexico City. In the higher areas such as Rancho Libre Barranca and Volcan Fuego it was cool, especially in the mornings, when a sweatshirt and lightweight jacked were required.

I packed the following: Scope & lightweight tripod, Dictaphone with external speaker and microphone (this got me several ticks), pre recorded tapes of birdcalls, a good torch e.g. maglite (for hopefully spotlighting night birds).

The exchange rate at the time of our visit was 12.6 Peso to the pound
(sterling), We took

The two field guides used were the excellent A Guide to the Birds of Mexico and Northern Central America by Steve Howell and Sophie Webb and National Geographic Field Guide to the Birds of North America. The latter guide was only really used for its illustrations of North American Migrants, as the text in the Mexican guide was much more informative.

The Lonely Planet Guide to Mexico was invaluable particularly for information on accommodation.

Very little problem on this front, apart from around San Blas where mosquitoes and midges were a real nuisance. Plenty of repellent and long sleeved shirts and trousers were required here. Malaria is apparently not a problem in the areas we visited, we did not take any anti-malarial treatment.

Compared to our visit to the Yucatan region last year we were disappointed with the variety of food on offer. Some of us were vegetarians, but we did eat fish, otherwise there would not have been a great deal of choice. Breakfast (often taken as lunch) was usually the best meal of the day when hot cakes, toast and eggs, e.g. Mexican style, omelettes and fried were usually on offer. Evening meals usually comprised of one of the following: fajitas, fish, pasta and pizza (when available). Meals, including drinks, tended to be between 30 and 80 pesos per head. 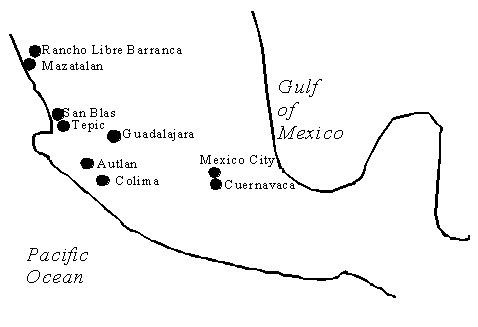 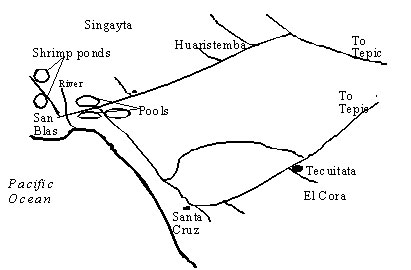 Singayta: This is a small village situated on the Tepic road (highway 74), 8 Km from the road bridge on the outskirts of San Blas. Birding was along the dirt track, which runs through the village, from the edge of the village and for several kms beyond. The track runs along the border of good forest mixed with farmland and marsh.

Huaristemba road: This is situated off the Tepic road (highway 74) about 23 Km from San Blas and is a 2.5 Km long section of tarmacked road leading to the villager of Huaristemba. The road runs through farmland with large hedges and small patches of woodland. We birded the first Km or so along this road plus a few small side tracks.

El Cora road: This is situated off the Santa Cruz to Tepic road (highway 76), which starts at the village of Tecuitata , and is a 9Km long dirt road leading to The village of ElCora. We birded the first few Kms of road, until it crossed a stream at the bottom of a valley. The road ran through a patchwork of plantations and woodland.

Tecuitata: We birded a section of highway 76 on the Tepic side of the village of Tecuitata and also a small track off into a coffee plantation.

San Blas shrimp ponds: These are situated along the road that runs north from San Blas to Guadalupe Victoria. The road starts on the edge of town just west of the bridge over the river and the ponds are along the first few Kms of road.

The only birding we did around Mazatalan itself was from: The balcony of the hotel which overlooked two islands which lie just off the coast, these were covered in Boobies and around the area of beach where the local fishermen land catch. This was good for gulls.

The site is situated along the Durango Highway (highway 40) and is just over a two hour drive from Mazatalan. The first few Kms of road are fairly flat but the road eventually winds to over 2,600 Metres.

The start of the track to the Barranca is at Km 200.5, shortly before the village of El Palmito and alongside a small restaurant and shop . We left the car in the layby by the shop all day, without any problems. 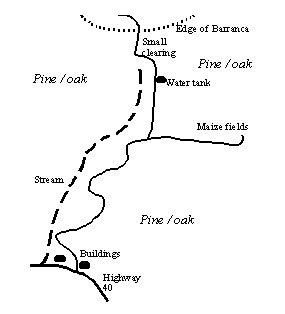 Autlan - Puerto los Mazos: This is a wooded hill, topped by a microwave station, about 11Km south of Autlan on highway 80. Park in a lay-by alongside a shop at Km post 169, the track starts between these buildings. The track runs through open, dry forest for most of its length, but towards the top it gives way to damp cloud forest. 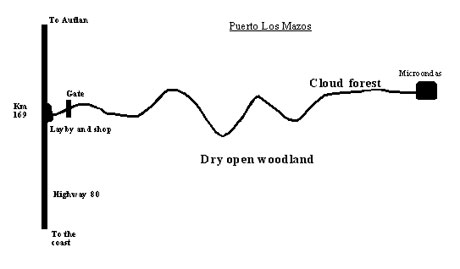 Colima- LaCumbre: This is a dry scrub covered hill, topped by a microwave station, about 15 minutes drive from Colima. It lies on highway 110, which runs east out of Colima. Park at the entrance to the track along side a building at Km post 213.

Volcan Fuego: The track is situated off the old highway 54, north of Colima and just south of the town of Atenquique. The track starts near Km post 56 and is marked

The first few kms of the track run through fields and hedges, slowly rising into more wooded habitat. After 8.9 Kms the road forks. Take the right fork and almost immediately you pass a water trough. At this point you leave the cultivation behind and enter pine/oak woodland. After 12.5 Kms you reach a x roads, carry straight on. The right hand track leads to the microwave station. After about 14 Kms the track started to deteriorate so we decided to leave the car and walked about a further 5 Kms.

We made several pre-dawn stops along the first few Kms, in the hope of picking up some night birds. We then stopped at around Km 8.7 by which time it was light, after this we stopped at several places between here and leaving the a car. On the return journey we stopped several times in the cultivated area, just before dusk. 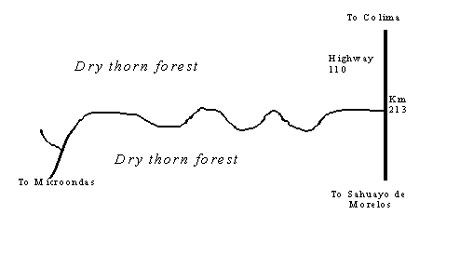 La Clima: Is situated off the old highway (highway 95?), north of Cuernavaca, 8.5 Km north of the main road junction in Tres Marias. We drove down the track for a couple of hundred metres and parked on a concrete base, which was a good vantage point to view the short turf which was covered in birds. Most of our birding here was done from the car as it was bitterly cold and very windy. We also spent an hour birding an area of woodland near the main road about 1 km back towards Tres Marias. 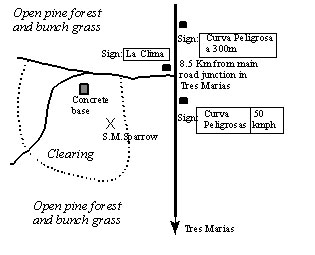 Coajumulco: Is situated on the old highway (highway 95?), north of Cuernavaca and south of Tres Marias. We parked in a lay-by just south of Km post 57 and spent about a hour birding the woodland below the lay-by. 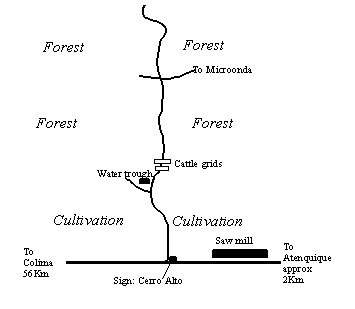