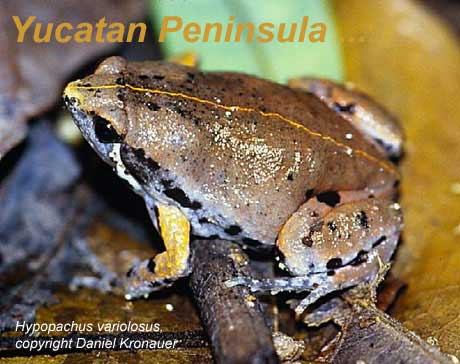 From Dec 14th through 22nd 2000, we travelled around on the Yucatan Peninsula on what we term a "combined birding and herping" trip. The reason we opted for Yucatan is its high endemism and easy accessibility from the U.S. One of us (DK) is a passionate herpetologist, while the other (FER) is an avid world birder, but fortunately the areas of interest for both animal groups coincide well, so we could each just concentrate on the respective group upon arrival at the sites.

FER tried to concentrate on the Yucatan endemics and was able to record almost all of them. Notable exceptions included the Cozumel Thrasher (almost extinct and only seen very few times in the past decade) and the two nocturnals, of which Yucatan Nightjar is reported to be absent from the peninsula during this time of the year and Yucatan Poorwill showed no sign of being vocal, despite many hours spent in the right habitat at night while "herping". Apart from the Yucatan endemics, an unexpected high proportion of Mexican/Northern Central American endemics occurring in the area could also be seen, though some - like Rufous-breasted Spinetail and Singing Quail - were missed and others - like Ridgway´s Rough-winged Swallow - were probably seen, but their identification was put off and they failed to be re-sighted.

The following contains the site accounts (in chronological order) and a complete trip list, as well as some information on the best literature on the area.

General: A non-ruin site, and probably the best one for most of the Yucatan dry forest bird endemics, even though authors of other trip reports are true in that there may actually still be extensive areas of similar habitat left elsewhere on the peninsula, maybe even within closer reach of Cancun. Yet, the forest here is certainly better than the one at Coba (and probably most other Maya ruin sites as well), so a 2-4 day stay should get you at least more than half of the Yucatan bird endemics of your trip.

Access and Accommodation: The town of Felipe Carrillo Puerto is easily reached by public transportation. It is probably best to stay at the clean and economic Hotel "Faisan y Venado" (name may be slightly different) right at the big "zocalo" (traffic "circus") in the center of town, though there is supposed to be at least one more hotel somewhere else in town. (Beware of the lousy food in the hotel's restaurant, though, unless you don't mind staying up all night).

From the "zocalo", it's only about 5 blocks to the east (as described in Howell's book and numerous other trip reports) before the street turns into a dirt road at a half-left turn (don't continue straight!). From here, it's about 1.4 km through fields, gardens and scattered houses all the way to a big school situated near the edge of the forest. The road goes on through the forest for another 28 km all the way to the gate of the Sian Kaan Biosphere Reserve, which is said to be hard to enter without a permit. In addition to the two lakes mentioned in Howell´s book there is a small swamp-like pond on the left side of the road at about 15 km from the school and about 2 km before a big clearing (see below) where several amphibian species can be observed at night. 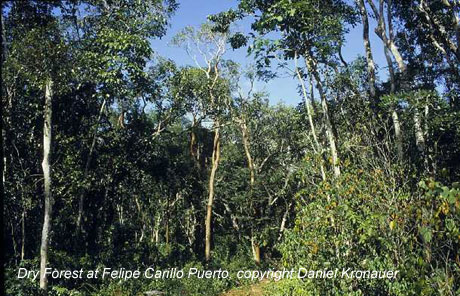 Birds to focus on: The first few kilometers of forest are badly degraded, but should not necessarily be avoided because of that, as some of the species (Blue Bunting, Green-backed Sparrow, Mangrove Vireo, Black Catbird, Northern Bentbill) actually appear to be easier to find here along one of the numerous paths that connect the road with clearings than farther on where these paths become scarcer. Look especially for Rose-throated Tanager and White-browed Wren, as this stretch turned out to be the only spot where FER ever saw them!

As you continue on along the road, one gets the impression that the forest becomes slightly higher, less dissected by paths and less impacted, even though big clearings don't cease to sporadically line the road. There is one particularly big clearing of probably several square kilometers around 14-18 km, and beyond there, the forest becomes scrubbier again. The western edge of this clearing stayed active throughout periods of the day, even though the only endemic species FER found there was a (familiy?) party of female-colored Gray-throated Chats (weird birds if you don't see the males, and hard to ID, too).

Parts of the higher dry forest before this clearing can be accessed on only a few footpaths (though you should be able to find one) and tend to fall silent after the early morning. This is the area to look out for White-bellied and Canivet's Emeralds, Wedge-tailed Sabrewings and mixed flocks containing Ivory-billed and Tawny-winged Woodcreeper, Eye-ringed Flatbill, Stub-tailed Spadebill and Lesser (common) and Tawny-crowned Greenlets. FER even got a really short glimpse of an Ocellated Turkey along one of these paths.

Make sure you're prepared for Myiarchus identification before you see one. FER was not, and so he saw one for a moment, ended up not identifying it and hoped for another sighting at this site - in vain. Eventually, seeing a positive Yucatan Flycatcher on this trip turned out to be a real problem 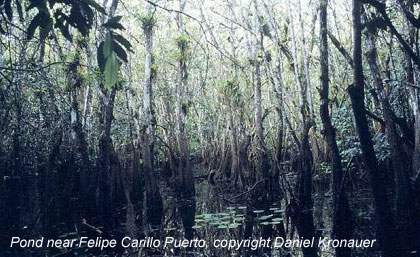 1. Norops lemurinus: One specimen was found on the forest floor under a fallen log another one could be observed under the bark of a dead tree in 1.5 m height during the day.

2. Thecadactylus rapicauda: A male was found under the bark of the same tree as 1.

3. Ameiva undulata: Several specimens were seen on the forest floor basking in the sun.

4. Norops sericeus: A female was sitting on a branch just above the forest floor.

5. Hemidactylus frenatus: These geckonids live in the houses of Felipe Carrillo Puerto and can be easily observed after sunset.

6. Elaphe flavivura: Was observed on the road mentioned above at 2.30 pm.

7. Bothrops asper: A specimen was observed at night on low vegetation in a forest pond.

8. Leptodactylus melanonotus: 2 of these frogs could be found at night on the floor near the same pond as 7.

9. Hyla loquax: Many specimens were found at the pond at night and males could be heard calling from 6 pm till 5.30 am from low vegetation in the water.

10. Hyla microcephala: Three males were observed calling from grasses in the pond at night.

12. Bufo marinus: One specimen was found on the floor near the road at night. 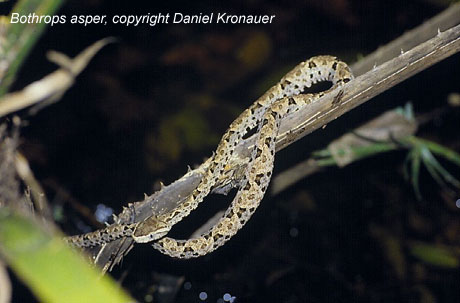