We spent 10 days in Sinai, Egypt based at Dahab on the Gulf of Aqaba. We spent a lot of time birding around the well-watered gardens of the Swiss Inn and Hilton Resorts at Dahab City, as well as the adjacent coast and nearby rocky desert. We stayed throughout at the excellent Swiss Inn resort in Dahab, but also took a full day trip to visit St Katherine’s Monastery and to climb Mount Sinai, as well as shorter excursions to visit nearby dive-sites like the Blue Hole and the Three Pools.

The main birding sites we birded are listed below.

a) The well-watered and leafy oasis of the grounds of the Dahab Swiss Inn hotel and adjacent even larger Hilton Hotel resort at Dahab City proved to be surprisingly good for birds. The flower borders and trees were full of Chiffchaffs, both House and Spanish Sparrows, Laughing Doves and a few Stonechats and White-spectacled Bulbuls, plus good numbers of Sardinian Warblers and a few Lesser Whitethroats. White Wagtails were numerous on the lawns, with a flock of up to 20 regular on the Hilton Resort football pitch, where they were joined by an adult Red-throated Pipit and a couple of Hoopoes. Much rarer still was an Olive-backed Pipit that regularly appeared in the late afternoon on the seaward lawn of the Hilton resort towards the eastern boundary mesh fence – a potential first for the country! Bluethroats were quite numerous in the early morning around the denser shrubberies with many males already in sub-song. Most of the males were either white-spotted or showed entirely blue throats, although there was at least one red-spotted bird. These were joined by at least 2 wintering European Robins and one very skulking locustella warbler that eventually gave itself up as a River Warbler. Cattle Egrets were also quite common on the lawns at either end of the day. Both Collared and Rock Doves occurred on the fringes of the hotels, whilst Hooded Crows and Kestrels were often seen flying over or perched on masts etc. Dahab is meant to be a good site for House Crow but all of the dozens of crows we looked at in the area over 10 days were clearly Hooded Crows - we didn’t see a single House Crow here in contrast to previous trip reports. 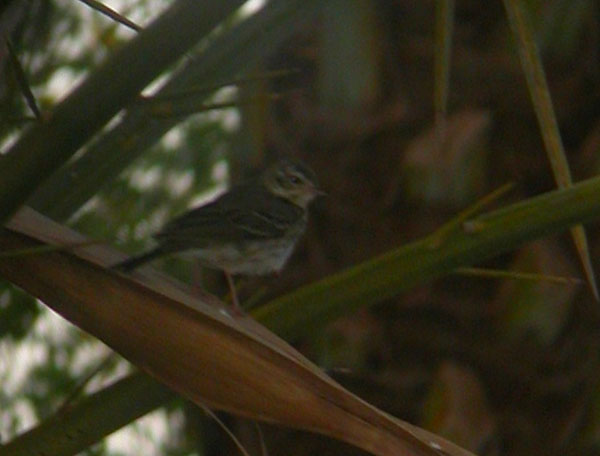 Overhead we saw the odd Barn Swallowand Pallid Swift pass through, plus a couple of House Martins one morning and a couple of Rock Martins feeding over scrubby agriculture just across the road. The rougher and more scrubby irrigated ground just inland from the hotels held very high numbers of Sardinian Warblers and Chiffchaffs plus a couple of Moustached Warblers and a pair of Spur-winged Plovers in wetter habitat. A blotchy immature male Palestine Sunbird seen briefly here and subsequently in the flowering hedge bordering the Swiss Inn resort was the only one of the trip. Sparse dusty scrub in rubbish-strewn wasteland inland from the lagoon was largely birdless but this was the only place where I saw Scrub Warbler – a lone bird feeding on flies buzzing around a dead dog! Whilst we also located a female Desert Wheatear on bare ground close to the lagoon.

b) Coast and lagoon: the sandy shoreline of the Dahab city resorts was pretty poor for birds. We had a Greenshank on the Swiss Inn beach first thing on the first morning, whilst up to 2 Caspian Terns occasionally hunted the shallow waters but were easier to find over the adjacent lagoon and point. A pair of Pied Kingfishers was resident throughout in the lagoon area, whilst a white phase Western Reef Heron regularly feed on the adjacent rocky point. The lagoon itself was heavily disturbed by wind surfers during the day but early morning saw the odd group of Slender-billed Gulls resting here joined by a lone Black-headed Gull, plus a group of 5 Shoveler one morning and 4 Ringed Plovers on another. There was a steady passage of gulls throughout the period with groups of gulls heading north up the coast, although occasionally these would also fly around the bay. Groups of up to 200 adult Slender-billed Gulls predominated and these sometimes contained the odd adult Black-headed Gull, whilst the next most common species was Baltic Gull passing north in groups of up to 25 adults. These were occasionally joined by the odd blunt-billed Armenian Gull and memorably on 25th by a lone 1st-winter Pallas’s Gull. White-eyed Gulls were very scarce and did not join up with the other species. We had a lone adult heading north off Dahab on 19th and another closer bird off the Blue Hole on 23rd.

c) Settling pools. A small series of settling pools (some dry) with an adjacent reedbed are located at the edge of a rubbish dump area in the desert just west of Dahab city (visible on Google earth). These pools held new birds in the shape of Moorhen, Common Snipe and Water Pipits, plus more Spur-winged Plovers, Ringed Plovers, Stonechats, Bluethroats and Chiffchaffs, whilst they attracted Pallid Swifts and Rock Martins overhead. Rather timid stray dogs also inhabit this area, but they took flight at the merest hint of me stooping to pick up a stone. Larger concrete lined settling pools between Dahab City and Assallah provided more habitat and added Little Grebe, Teal, Redshank, Common Sandpiper, Yellow Wagtail, Sand Martin and Sandwich Tern, as well as 15 Greenshanks, Swallows including birds of the local savignii race, Rock Martins and White Wagtails. I failed to encounter sandgrouse coming in to drink at either set of pools despite several dawn and dusk visits, possibly because heavy rains earlier in the winter had left scattered pools in the desert interior, which the birds could use instead.

d) Desert wadis. Several wadis were within easy walking distance from the Swiss Inn heading inland from the smaller setting pools. These sand-bottomed valleys twisted up into the coastal granite mountains. Birds were pretty scarce but early morning visits paid dividends. Chiffchaffs, Rock Doves and Collared Doves, plus Rock Martin and Pallid Swift overhead were the most numerous birds, but a small prickly bush at the entrance to a rocky wadi held a lone male Cyprus Warbler, whilst anArabian Warbler skulked in a large Acacia. I flushed up a Sand Partridge from under another thorny bush, whilst White-crowned Black Wheatears sang from the crags. A repeated Dunnock-like warble “Where are you? Wheecher, wheecher” lead me to a male Striolated Bunting singing from the top of a rocky ridge and whilst attempting to photograph this I flushed up to two Crowned Sandgrouse from very close quarters. A male Northern Wheatear and a Desert Red Fox on the last morning completed the wadi list.

e) Blue Hole and Ras Abu Gallum. A drive north through Assallah to the Blue Hole produced a couple of Red-rumped Swallows feeding around a hotel complex, plus a male Desert Wheatear, a Blackstart and a Hooded Wheatear in roadside wadis closer to the Blue Hole plus more White-crowned Black Wheatears. A walk north into Ras Abu Gallum from the Blue Hole in the mid-morning heat produced very little other than a passing White Wagtail and a Laughing Dove.

f) Three pools. This dive-site lies just SW of Dahab city and the Happy Life Village here produced 3 Hoopoes plus a Lanner which flew across the bay into the high cliffs above the resort.

The buses that used to ferry huge numbers of tourists to this area were generally not running and instead we booked a car plus driver for the day (45 Euros per person, note you need passports and valid visas for this trip). This had the advantage that we could stop whenever we liked on the journey and you have the mountain more or less to yourselves. Trips either consist of a pre-dawn climb of the mountain to catch the sunrise from the top or a later afternoon climb to catch the sunset. We opted for the latter which also meant that the two hour drive from Dahab was conducted in the early morning.

a) Dahab to St Katherine’s. The desert habitats were surprisingly varied on this route (compared to the run to Sharm el-Sheik) and following heavy rains earlier in the winter, there were numerous roadside pools. The first section north towards Nuweiba produced a Blue Rock-thrush and a Desert Lark, as well as more White-crowned Black Wheatears plus Collared and Rock Doves. There were 2 more White-crowned Black Wheatears at the Police check-point just after heading off west on the road to St Katherine’s plus a roadside Desert Wheatear. A stop at a large roadside pool with large Acacia trees produced Chiffchaff, White Wagtail, Rock Martin, Tawny Pipit and a splendid Blackstart, whilst a stop further on in a well vegetated area produced a loose group of some 15 Trumpeter Finches, at least one Asian Desert Warbler and more Sand Partridges calling from a rocky hillside.

b) St Katherine’s Monastery. There was a confiding pair of Bar-tailed Larks on the flat sandy area behind the car park, whilst the rock valley up to the monastery produced more White-crowned Black Wheatears. The gardens of the monastery were fairly quiet but held Chiffchaff and Sardinian Warbler as well as the three common doves (Laughing, Collared and Rock Doves). Calls from the high rock slopes lead us to a couple of distant Sinai Rosefinches and these were followed by closer views of a pair by the camel rest areas at the start of the walking track where they were joined by a noisy pair of Tristram’s Grackles. A further 2 pairs of the latter called as we headed back towards the car park but better still were a pair of Syrian Serins that bounded around off the hillside and landed briefly in one of the tall trees in the monastery gardens.

c) Mount Sinai. We had lunch outside a local Bedouin house (organised as part of the trip) with Rock Martin, Pallid Swift and White-crowned Black Wheatear in the vicinity and then headed up to Mount Sinai via Wadi Arba ‘in in the mid afternoon. This gently sloping camel track leads up from behind the Bedouin Village and passes up an amazing steep-sided Wadi containing walled gardens with a running stream and pools. Janet rode a camel up whilst I walked and birded behind. It looked ideal for migrants but was surprisingly quiet. Sinai Rosefinch was the commonest bird with several perched on roofs at the start of the track and we encountered more groups as we headed up the wadi. There were also several White-crowned Black Wheatears, more Rock Martins and Rock Doves, a single Red-throated Pipit and at least 2 pairs of Desert Larks. The steeper upper sections of the Mountain held a further 20+ Sinai Rosefinches, which were very confiding on the peak, 5 Tristram’s Grackles, 2 more White-crowned Black Wheatears, at least one Chukkar and a brief pair of Fan-tailed Ravens. We saw and heard no Scrub Warblers on the mountain although several Lesser Egyptian Gerbils running around on the summit rocks had us going.

This route passes largely through extremely barren rocky mountains and was generally rather birdless. A Barbary Falcon soared around a ridge towards the Dahab end, whilst rubbish around desert villages attracted both Black kites and groups of Fan-tailed Ravens. The vast rubbish-strewn plain north of Sharm el-Sheikh airport was depressing to behold – every single scrubby plant as far as the eye could see was covered in wind-blown plastic bags......

In addition to birds, the resorts around Dahab were packed with groups of Blue-hipped Hawker dragonflies and held small numbers of Arfican Monarch and Painted Lady butterflies, the latter were also common in adjacent areas of vegetated desert.