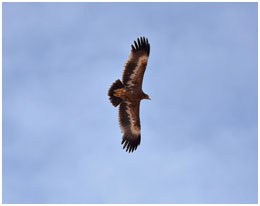 The reason for this trip was to finish off the year with a few colourful birds and some sunshine. This was our fourth trip to Egypt.

We flew from Bremen-Istanbul-Sharm El Sheikh with Turkish Airlines and stayed at the Tropicana Tivoli hotel in Sharm. A car was hired with the help of the hotel masseur which cost us 240 € for 5 days. Definitely too much but it was similar to the price we were quoted in Germany before we left so we were happy enough with the deal and the car. The hotel was good and the weather was great with temperatures between 24-29°C all week.

We of course had the usual problems with our optical equipment at customs control and we were also turned away from a checkpoint on a trip to Wadi Feiran. The only other problem for me was with the mosquito's! A trip to the Monastery at St Katherine's was a must. Otherwise only local birding was planned.

Early start and a look at our new local patch. There were plenty of hotel gardens but also lots of waste ground where derelict or unfinished hotels stood. My first bird was a House Sparrow and Ken's a Pallid Swift! Bluethroat, Cattle Egret, Common Crane, Richard's Pipit, Pale Crag Martin, White Wagtail, Rock Dove (Ferel?), Sardinian Warbler, African Collared Dove, Hooded Crow, Chiffchaff, Wood Warbler, Kestrel, Stonechat, Grey Heron, Booted Eagle (pale phase), House Crow, Hoopoe, Wigeon. By 10:30 it was too hot for birding, so we spent the rest of the day at the hotel and organizing a car.

We left the hotel at 04:00 and arrived at St Katherine's just after 08:00. The walk to the Monastery from the car park is not too far but we didn't know this and stopped a taxi while half way up, we arrived at the site one minute later! The taxi driver seemed pleased with his work and of course overcharged us!

We spent the morning and evening at the monastery and the rest of the time exploring the local desert. Tristram's Starling, Desert Lark, White-crowned Wheatear were common. Chukar and Sand Partridge were also seen or heard. A female Sardinian Warbler kept us busy for a while until we got a proper look at it! We decided to stay the night at a hotel in the village.

We arrived back at the monastery before dawn and waited at the Camel feeding area. After a short wait (it gets light very quickly) we were suddenly surrounded by birds. Partridges and Pigeons flying in from the mountains and Desert Larks and Tristram's Starlings suddenly appearing in front of us. Quite a spectacle but still no Rosefinches!! On the way back to Sharm we saw; Brown-necked Raven, Black Kite, White-crowned Wheatear and Spotted Sandgrouse.

I photographed Cattle Egrets in the afternoon and we watched Champions League football in the T2 English pub next to our hotel in the evening. We were after all on holiday!

We left the Ras Mohammed Park at 11:00 and headed for Wadi Feiran along the coastal road stopping to look at a Hoopoe Lark a Pallid Harrier and Brown-necked Ravens on the way. However, when we had almost reached our destination we were turned away at a checkpoint because of terrorist behaviour in the area and sent back via Sharm El Sheikh. We then took the other route to St Katherine's.

On the way we saw a Sooty Falcon. This time we stayed at the Plaza Hotel in St Katherine's and prepared for our final visit to the Monastery.

Again an early start and the same spectacle as last time. Plenty of birds at the Camel feeding area but again no Rosefinches! We then walked a bit further up the mountain and saw two Scrub Warblers. After having breakfast with a couple of the local Bedouin kids we finally gave up and headed back to Sharm.

In retrospect we should have carried on up the mountain then I think we would have eventually seen the Rosefinches? On the way back we stopped at a rubbish tip just outside Sharm where hundreds of White Storks were circling above the tip. Steppe and Imperial Eagles, Black Kites, Mourning Wheatears and our first Hooded Wheatears were seen.

In Sharm we stopped at the Jolie Ville Golf Club but as soon as someone saw me taking photographs we were asked to leave! We then had a walk around the Botanical Gardens which are opposite the Golf Course and added Common Quail to our list.

We spent the morning walking along the Naama Bay Beach Promenade. Lots of hotel gardens on one side and the beach on the other. Bluethroats were common and we added Red-breasted Flycatcher to the list. We returned the car at midday and had a walk around our local patch. Saw a nice male Hooded Wheatear and a flock of Spanish Sparrows.

Early taxi to the Jolie Ville Golf Course. We finally got on the course but were not made very welcome! They eventually spotted us and picked us up in one of their vehicles and dropped us off at hole 19 where we had a coffee and re-assessed the situation. The Golf Course was a big disappointment anyway, it is of course not the right time of year for a long species list in Egypt! A juvenile Crane and a Greater Flamingo were the highlights. We then went to the Botanical gardens but only added Song Thrush to our list. Before we got a taxi back to the hotel we walked along the main road and found an obliging female Namaqua Dove to photograph.

We saw a total of 85 species and if we had found the Water Treatment Plant in Sharm and also visited Wadi Feiran we would have had a few more. It is essential to get information on local sites (Google maps) before you go! None of the locals new anything about a water treatment plant or Sewage works and we wasted time aimlessly driving around!