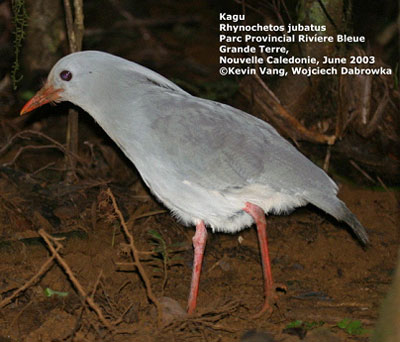 The Southern Province of New Caledonia (Province Sud de Nouvelle-Calédonie) occupies the southern half of the main island of Grande Terre. It includes the capital of Nouméa and the famous Parc Provincial de Rivère-Bleue, which is the main preserve of the endemic kagu and holds all of Grand Terre's other endemics.

As a gift to the Islanders for putting up with colonial rule, the French Government does not charge any income tax to local residents. Therefore prices for accommodation, food and other items are quite high when compared to Australia or New Zealand prices. It is best to purchase a package holiday, which includes airfare, car rental and accommodation. These packages often include a variety of other features, but the serious birdwatcher can ditch many of these in favour of simply going out looking at birds.

The time of year is also important with the wet season lasting from late December to early April. Usually early June is quite safe, but unfortunately, we had the remnants of a very late season Cyclone Gina which was dissipating as it approached New Caledonia from Vanuatu. It brought off and on showers, sometimes quite heavy, but generally the rain it did not impact too much on the bird watching.

Anse Vata Beach: We got a holiday package and stayed at this famous tourist beach at the Hotel Lantana Beach. The bird watching here is not too exciting, but it is easy to see urban-type birds and the endemic Dark-Brown Honeyeater (Lichmera incana).

Parc Provincial de Rivère-Bleue: The park comprises the western half of the large Lac de Yaté and a large area of hill and valley forests to the west. The elevation ranges from 165m at the lake edge to 1250m on Mt Dzumac. We headed to this park on the second day to find kagu (Rhynochetos jubatus). Unfortunately the park had been closed since March 13, 2003 when Super-Cyclone Erica tore across the main island killing 2, injuring over 100 and leaving 1000 homeless. Fortunately we arranged special access through the park authorities. We were successful in finding the kagu and several other endemics. 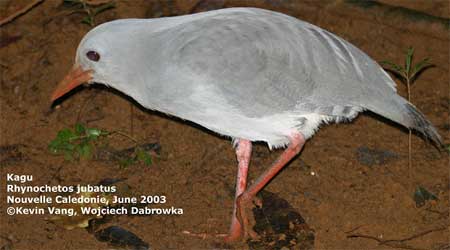 Farino Area: This is a pleasant hill area in the northern part of the Province where we spent the 3rd day. Showers were becoming more persistent as Cyclone Gina approached. However, they were intermittent and not too heavy. Farino is maze of trails and roads, and the birds, including many endemics, are easy to see from the car or along trails. The elevations surveyed were from 100-500m. On the way to Farino, we stopped briefly along the road at Boulouparís, about 50 m, where some bird activity was noted.

Forêt des Monts Koghis: This hill area just to the north of Nouméa holds nice rain forest, which has very good bird watching. There are many trails, and we surveyed along a variety of them from 400-600m. However, as the day wore on the showers turned to heavy rain, and we were forced into an early afternoon after falling down a raging hillside rivulet.

Very common throughout southern part of island from sea-level in Nouméa to 250 m around Farino, 7-9 June 2003.

Very common throughout southern part of islands from sea-level mangroves around Nouméa to 250 m around Farino, usually perched on wires or snags, 7-8 June 2003.

Farino Area, Waypoint 303, 238 m, 1 female seen in garden area and photographed, differed from book description in that it had a solid white eye-ring and white lateral patches on tail, 8 June 2003.

Farino Area, 1 seen and photographed at Waypoint 303, 238 m, perched on barbed wire fence at the edge of garden and then flew into grass, 8 June 2003.

Common in most roadside areas and in urban parks including Nouméa throughout Southern Province, 7-10 June 2003.

Farino Area, Waypoint 303, 238 m, few seen and photographed in garden on phone lines, they seemed to have a odd manner of flattening itself and rocking its rump and tail up and down and from side to side, this may be due to the fact that it was raining and they were shedding water or maybe just a local habit, common also on roadside wires from Waypoint 299 to Farino, 40-250m, 8 June 2003.