Participants: Andrew Birch and Lance Tanino guiding me for 1 day on the Big Island

This was a family trip with young kids, so birding was reserved for early morning (mostly pre-breakfast excursions). The exception was one full day I reserved to go birding with Lance Tanino, Hawaii Bird Guide on the Big Island.

We arrived at Honolulu on Tues Nov 21st, 2017 at lunchtime and after dropping the family off at the Kahala Hotel on the southern side of the island, I headed up to the Honouliuli unit for some of the staked out Asian vagrants. I searched Pond A extensively and despite seeing 3 or 4 Sharp-tailed Sandpipers and the continuing Wilson’s Snipe, I failed to find the long-staying Little Stint. Hawaiian Stilts and Hawaiian Coots were common here and some consolation exotics for my ABA list were in the form of abundant Common Waxbill, Red-crested Cardinals, Red-vented Bulbuls, Red Junglefowl and a single White-rumped Shama along with Zebra and Laughing Doves. 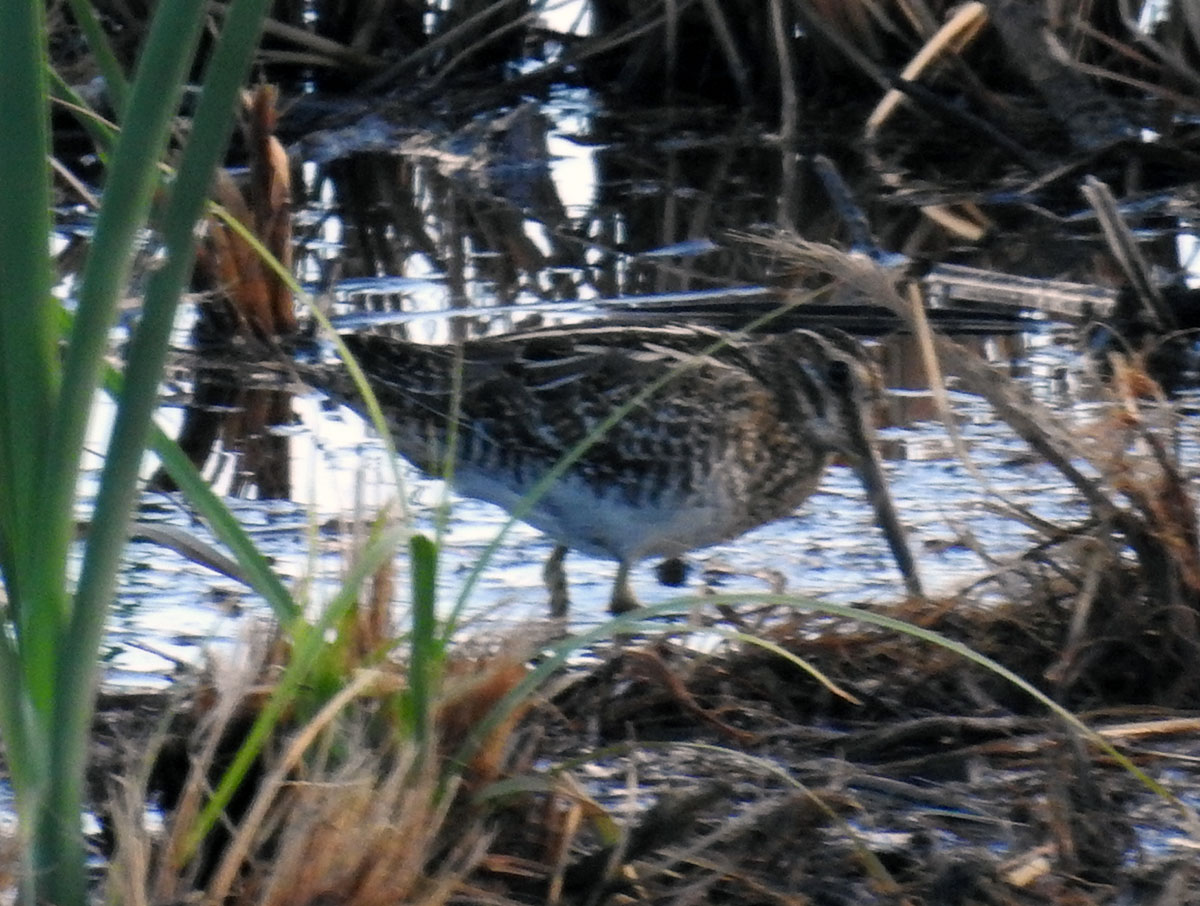 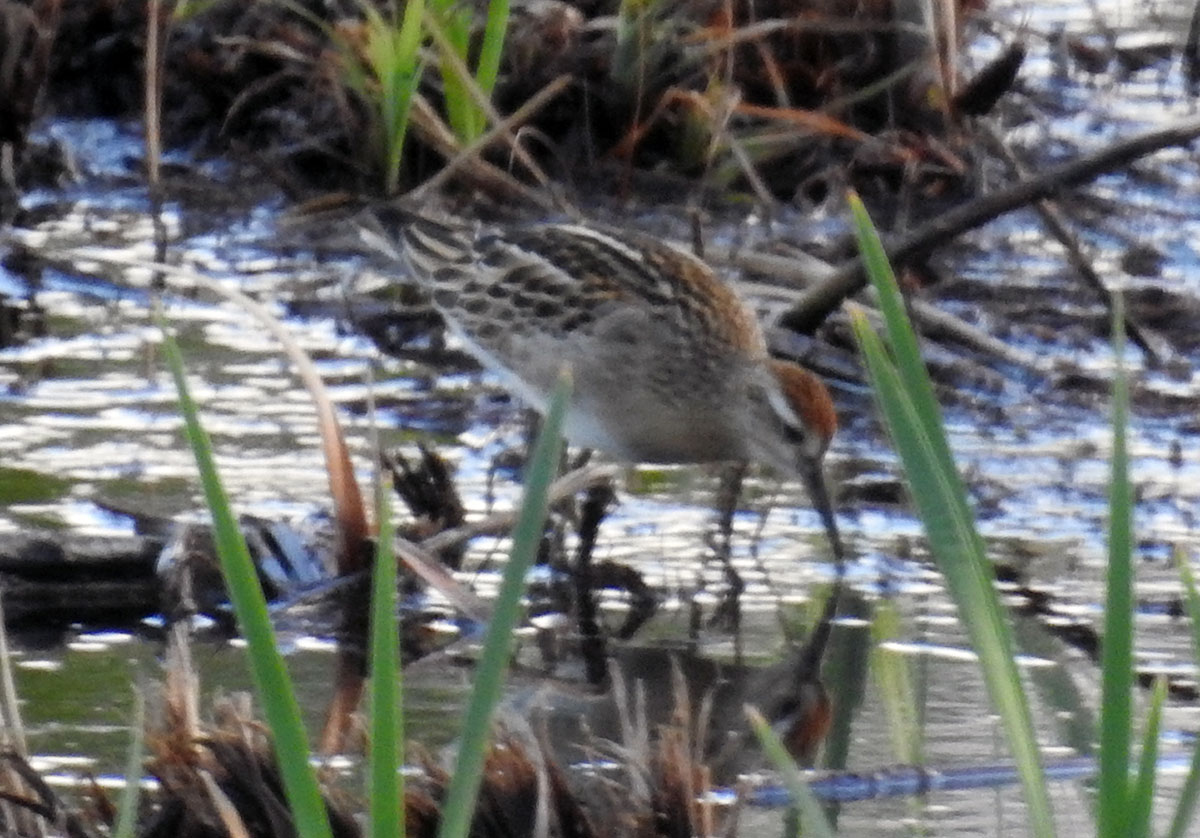 I continued over to the larger Pond B to look for the Garganeys. After some searching, I found two “teals” in the far corner nervously swimming and feeding in and out of the long grass. With scope views, I was able to confirm one was a Blue-winged Teal and the other a Garganey! 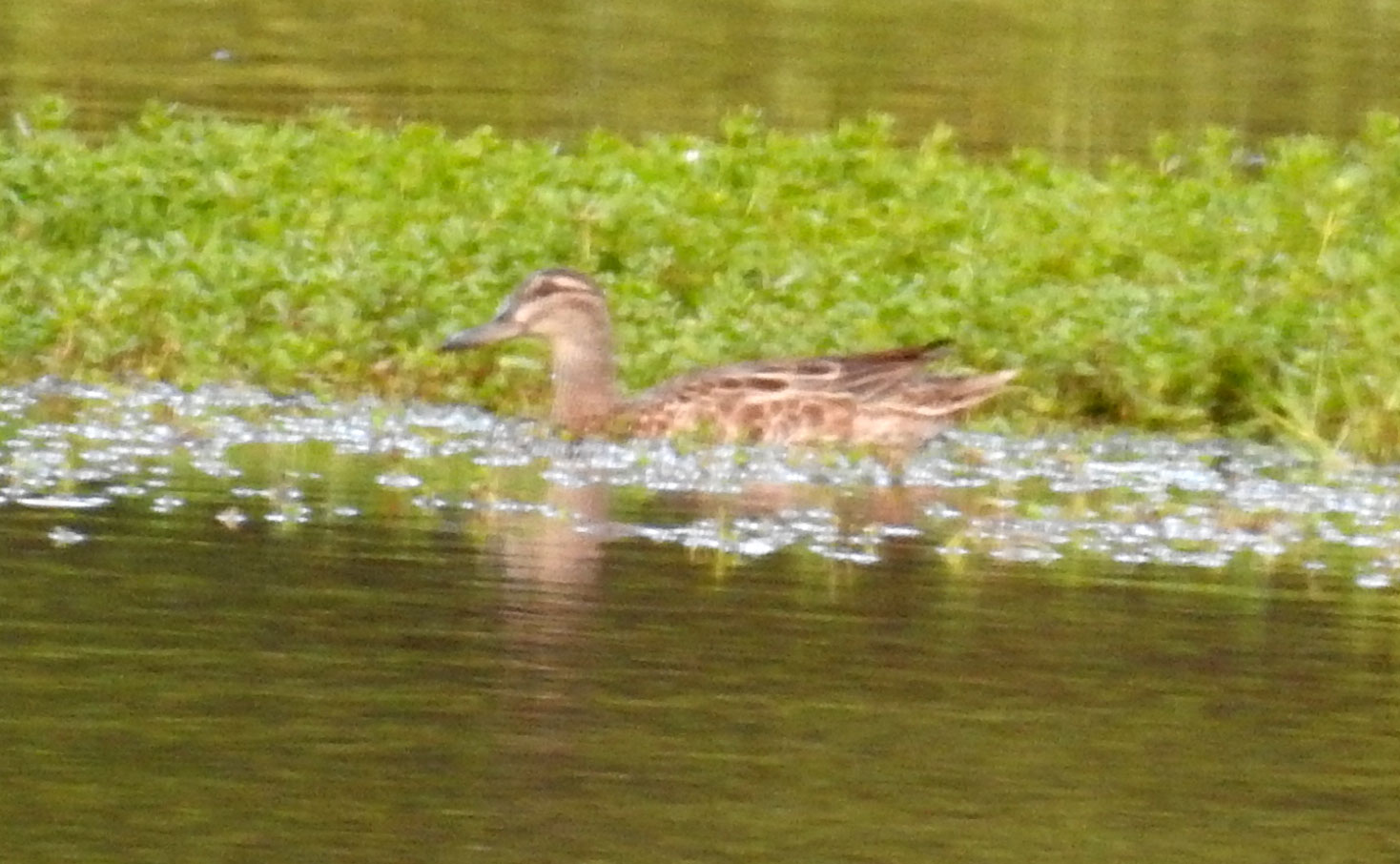 Satisfied with the impressive haul (although disappointed at missing the stint), I headed back towards Honolulu for White Tern. I set the GPS for Kalakauau Ave and parked at the Jack in the Box on the corner of King St. After tantalizing views of terns from the freeway whilst driving on the way to the site, it was a relief around 5pm, to see 4 White Terns gracefully flying around the trees over their nest sites on Kalakauau Ave.

On Weds Nov 22nd, I got up early to be at the Aiea Ridge Trail by 7am. After parking at the trail head at the upper parking lot and noting Junglefowland Pacific Golden Plover around the parking lot, I was soon on the trail. Boots are advised along with raingear.

In the gloom of the trail, a White-rumped Shama fed on the trail ahead of me and Red-whiskered Bulbuls sang from trees over the trail. When I reached the 2 benches, I started to hear Oahu Amakihi. It’s worth doing the homework on their call ahead of time, which sounds a bit like a Gnatcatcher. Walking another 10mins or so up the trail to a large electric pylon gave me good views of Oahu Amakihi.

Another 20-30 mins further and I stopped in an open area of the trail and listened to the call of Red-billed Leothrix, hoping to spot one. Eventually, two Red-billed Leiothrix came out, followed soon after by a beautiful buffy juvenile Oahu Elepaio! I felt so lucky as this is a difficult and unreliable bird to see and one I had resigned myself to not seeing on this trip. It fed at eye level for a minute or so before it moved on. The only other Oahu endemic left to see on this trail was Mariana Swiftlet, which are also very hard indeed.

I continued along the trail for another 30 mins or so picking up more Amakihis, and several small groups of Apapane flying over and 2 Red-masked Parakeets. Eventually, the trail comes to an opening where you can look down on the H3 freeway. Apparently, the Swiftlets nest or have nested in the tunnel over the freeway. After some scanning, I then headed back the way I came on the trail and saw another trail off to the right (with no sign). I walked a little way up that other trail and came across a sign that said “Summit Trail, Advanced”. I walked a couple of hundred yards further on this trail and after a 10 min wait, a Mariana Swiftlet appeared low over the trees feeding back and forth. I couldn’t believe my luck and soon headed back down the trail (the way I had come) to my car having seen all the endemics, many of which are usually very difficult. On the way down, one more Mariana Swiftlet appeared over the Ridge trail and I saw several more Leiothrix and Amakihi and Apapane high overhead.

I spent family time on Weds afternoon but did notice Ring-necked Parakeet and White Tern around the Kahala hotel.

On Thurs Nov’ 23rd, we caught a late morning flight to the Big Island. We arrived at the Mauna Lani Resort late afternoon and I managed a few minutes to get out and check the south Golf Course for the wintering Bristle-thighed Curlews. I soon found 3 birds and had terrific views alongside the abundant Pacific Golden Plovers there. I also saw 6 Gray Francolins and a few Saffron Finches and Hawaiian Geese here. 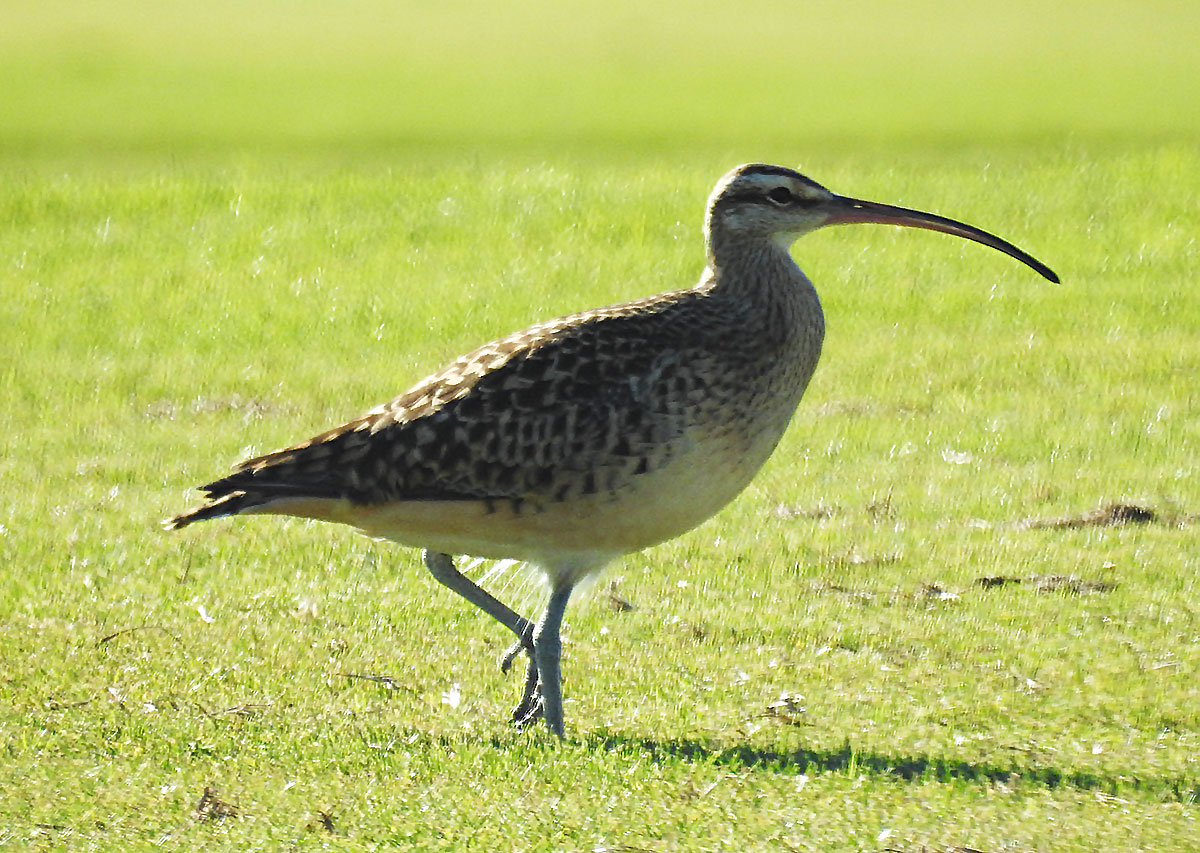 Fri morning Nov’ 24th, I got up early and headed out to the nearby Waikoloa Village. I found the Rosy-faced Lovebirds easily by the Texaco gas station. I then spent the following hour walking around the perimeter of the course for the Chestnut-bellied Sandgrouse without success but did see Java Sparrows, Saffron Finches and plenty of Hawaiian Geese. In the afternoon, I saw more ABA exotics for the life list; Yellow-billed Cardinals and Yellow-fronted Canaries around the Mauna Lani resort – often around the pool area and fish ponds.

On Sat Nov 25th, I had reserved a day off and I met up early with local guide Lance Tanino. I had hired Lance to take me in to Hakalau Forest, for the island endemics. Hiring a guide is essential to visit this tract as access is closed to the public. Lance was a fantastic guide and I thoroughly recommend him. Once in the forest, not only did we see all the target birds quickly because Lance knows where to look and what their calls are but Lance is also very knowledgeable about the island natural history, making for an all around natural history excursion.

On the drive up to the forest, we saw Erckel’s Francolins and Eurasian Skylarks from the car. We finally arrived at the Pua Akala tract, which was superb. After parking up in the rain, we were immediately greeted by calling I’iwi, Hawaii Amakihi and Apapane. We saw all of these birds well from the parking area. After a short walk down in to the tract, Lance heard a calling juvenile Akiapolaau. He soon tracked it down in a nearby tree and we enjoyed superb views of this often difficult to find bird. A short while later, he pointed out a Hawaiian Elepaio and in a moment of not knowing where to look next, we had Hawaii Akepa and Hawaii Creeper above us in the same binocular view! Meanwhile, the Akiapolaau followed us along the trail and we had more views of this bulky bird. All that was left to see in this tract was Omao and we had only been birding for an hour! Sure enough, it wasn’t long before we started to see Omao and we saw a total of 4 birds. We stopped for an early bento lunch in the rain shelter and made plans to capitalize on our good luck and leave the tract to try for Palila on the other side of the mountain. 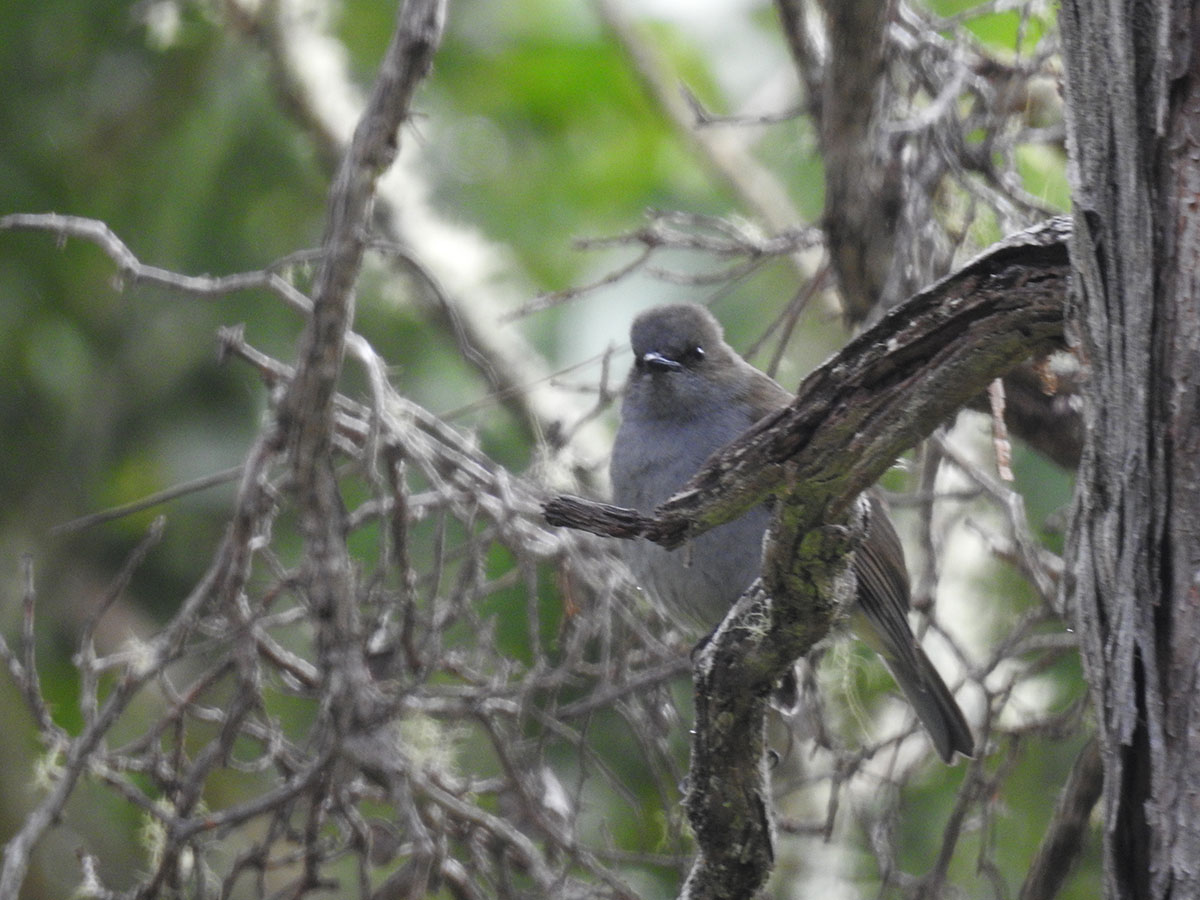 After lunch, we headed back up the track, picking up 5 Kalij Pheasants on the way. Lance then drove over to Kaohe and stopped at a spot where he has seen Palila before. It’s the lowest elevation he’s had this unique grosbeak-like bird but thought it was worth a shot. Almost as soon as we got out of the car, Lance spotted a Hawaiian (Mauna Kea subspecies) Elepaio in a tree next to the car and then he heard the soft singing of a Palila close by. It went quiet for a few minutes and then the bird started singing again in a tree a 100 yards away and we had fantastic views of a male Palila! 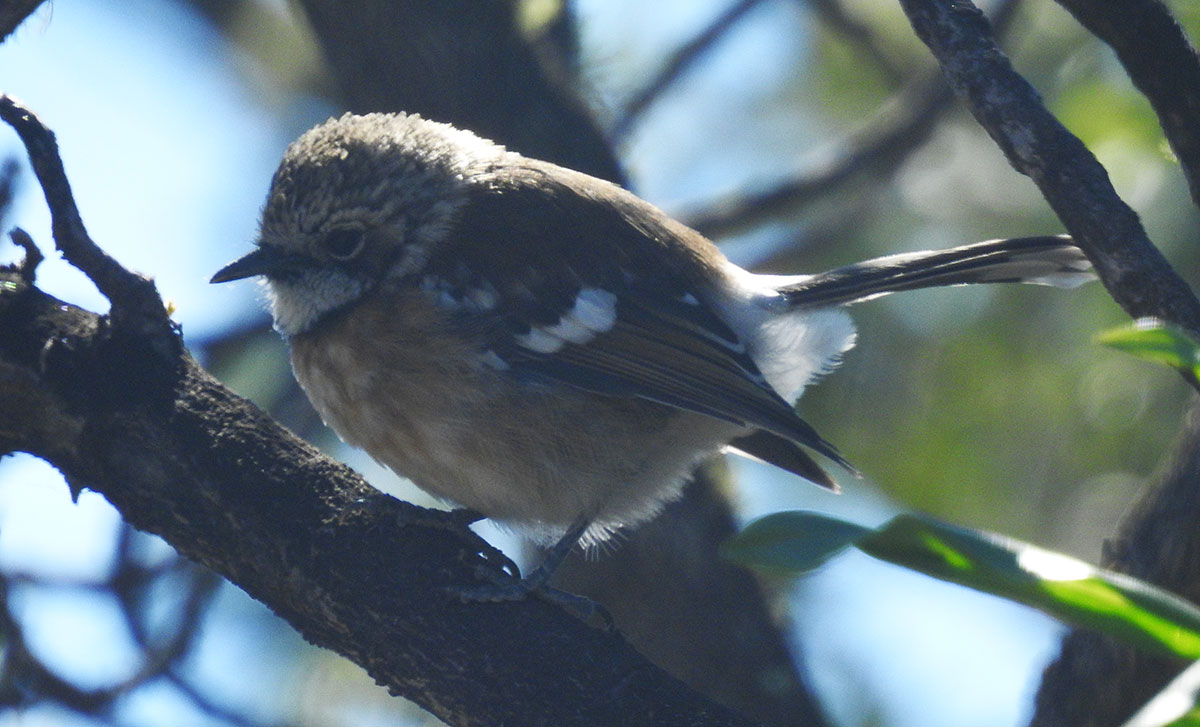 With a full-house of Big Island endemics under the belt, Lance graciously agreed to show me where to find the sandgrouse down in Waikoloa area. Bang on cue after we arrived, we had about 20 Chestnut-bellied Sandgrouse flush up from the side of the road. These can be difficult birds to find, so I would recommend enlisting Lance’s services for these birds. Calling it a day, Lance also shared good spots for exotics that I still needed; Red Avadavat, Black Francolin, Japanese Bush Warbler, Japanese Quail and Hawaiian Duck.

Early on the 27th Nov, I made a last early morning attempt at some exotics. Outside of Waikoloa Village, Lance recommended a good spot for Red Avadavat. After a few minutes, and some false alarms with Yellow-fronted Canaries, I had 3 Avadavats fly through. Luckily I was able to focus my binoculars on a nice red male as it flew through calling. I had a few more Avadavat fly-bys as well as Scaly-breasted Munia at this site along with the ubiquitous Eurasian Skylarks.

Next I drove up Saddle Road, scanning the roadside verges along the way. 2 Erckel’s Francolins shot in to the grass and a few minutes later, a lovely male Black Francolin ran by.

I then headed down to Waimea (passing by the Japanese Quail site as time was limited) and parked up at a pool that had about 20-30 hybrid Hawaiian/Mallards. In amongst them, were 2 small, teal-sized, dark brown ducks that I believe were the Hawaiian Ducks. Lance has had 4 birds at this site.

As time was limited, I skipped over the Bush Warbler site and headed back to the Mauna Lani for our last day before flying home. All week, we had strong trade winds and so over lunch I set up the scope and scanned the sea. It was pretty dead but I did have a single male Great Frigatebird cruising high just offshore.

A fantastic short week with a bucket load of new ABA birds!