Comments
With South Korea co-hosting the FIFA World Cup, many people are getting their first look at this fascinating country. Whilst the football has been undeniably exciting, the birds are even better! If you're thinking of visiting Korea, this review should help you to decide the best times for your visit and lists some of the great birds you can expect to see.

South Korea has a temperate/continental climate, with generally hot summers (maxima typically above 25C from mid-June to mid-August), and cold winters (below freezing most nights between December and February). Rainfall tends to be concentrated in the summer monsoon (mid-June to July) or is associated with typhoons (late July to mid-September). Winters are often very dry. 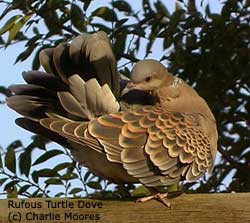 These representative species are joined seasonally by a very wide number of migrants: of the 475 or so species of bird recorded in Korea, less than 40 can be considered truly resident.

In occasional periods of extreme cold many smaller rivers and reservoirs freeze over. Temperatures often drop to -5 C at night, and stay near freezing in the day. Periods of light snow and severe cold are usually followed by milder temperatures, and then severe cold again. 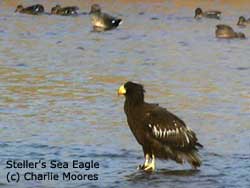 An organised winter tour can expect about 160 species in 12 days if all the best areas are visited, and winter specialities include Baikal Teal and Scaly-sided Merganser, Swan and Lesser White-fronted Goose, Steller's Sea and Eastern Imperial Eagle, Relict and Saunders's Gull and Solitary Snipe! Red-crowned Cranes stand out on tidal-flats at Kanghwa, while White-naped and Hooded Cranes can be found in the south. Huge numbers of ducks and geese fill sites like Haenam and Seosan's Cheonsu Bay. Siberian Accentors can be common. On the southern island of Jeju milder conditions allow White's and Pale Thrushes, Olive-backed Pipits, and Red-flanked Bluetails to overwinter along with Korea's only regular winter Black-faced Spoonbills, and several thousand Mandarin Duck.

Cold winters mean both temperatures and birding are similar to January, while mild winters are marked by brief spells of rain or sleet, often followed by warmer sunshine, with maximum temperatures rising to 15 C in the southeast.

Many wildfowl are on the move by mid-month, including one or two Baer's Pochard. Tundra Beans, Greater White-fronted and usually Swan Geese can be found at the Han-Imjin. Most Baikal Teal start to depart and can be difficult to find in southern locations. Rooks and Daurian Jackdaws begin to move back into the Nakdong valley and near Gunsan. February sees the start of crane migration, with Hooded and White-napeds moving into South Korea from Japan. Relict and Saunders's Gull peak at several sites. In the right weather conditions large numbers of Ancient Murrelets and a few Rhinoceros Auklets move north off Kuryong Po. At the end of the month the first migrants, such as Far Eastern Curlews, Hoopoes and Japanese Lesser Sparrowhawks, arrive.

March often contains a mixture of dry, cold days (with night temperatures down to 3-4 C, and highs between 10 and 15 C) and occasional milder showery, windy weather. 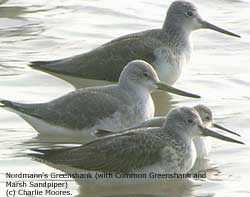 The cranes, winter raptors, and Relict Gulls have gone, but large numbers of shorebirds have arrived. Peaks of ca 100 000 shorebirds at Saemankeum are higher than anywhere else in the Yellow Sea, inc up to 40 000 Great Knot, and small numbers of the globally-endangered Nordmann's Greenshank and Spoon-billed Sandpiper. Other Korean specialities, include Chinese Egret from mid-month, and Black-faced Spoonbill in small groups along the coast. This latter species has a world population of less than 900! Passerine migration peaks towards the end of the month, with the first leaf warblers, Blue-and-white, Narcissus and Yellow-rumped Flycatchers, and Tristram's and Yellow-browed Buntings. Look for Japanese migrants, including Japanese Robin and Brown Thrush in the far southeast or the far southwest. Up to 100 species a day are possible on Eocheong and Kago Island from April 25 onward (with a record-breaking 122 recorded on April 30 2002 by our tour group!)

Like April, a great birding month. Temperatures begin to climb with day maxima often reaching 25 C by the end of the month, though feeling cooler on offshore islands due to low sea temperatures and wind. Fog can temporarily limit birding, while also causing spectacular falls of migrants.

Often hot (temperatures up to 30C inland) and humid, with very heavy rains some years by mid-month.

By early June, Yellow and the rare Shrenk's Bittern are breeding in reed-beds, and Watercock give their (slightly comical) gulping calls in the best rice-field areas. Nesting activity in Black-faced Spoonbill and Chinese Egret colonies reaches its peak, and forest nesters are still vocal, especially in the first half of the month. At Kwangneung, typical species include 4 species of woodpecker, Ruddy Kingfisher, Yellow-rumped Flycatcher and Mandarin Duck, while on the south coast at Koje Island Pale Thrush, Blue-and-white Flycatcher and Yellow-throated Bunting predominate. Black Woodpigeon nest on Kago and other islands and Styann's Grasshopper Warbler are widespread on small islets: both species, plus the very local Russet Sparrow, can be seen well on Ullung Do.

Young Japanese and White-faced Wagtails can be found begging food on streams and rivers in the southeast. Juvenile Chinese Egrets and Eastern Oystercatchers are on north-west tidal-flats, Chinese Goshawks on telegraph poles in rice-fields throughout the country.

Black-naped Orioles, Vinous-throated Parrotbills and parties of tits, are found in almost all woodland areas. By the end of July the first returning shorebirds arrive, with large numbers of Far Eastern and Eurasian Curlews at Kanghwa and the Geum estuary.

Often hot and humid (sometimes up to 30C), with occasional heavy rains and strong winds, associated either with southern typhoons or the mix of humidity and heat..

Chinese Egrets become widespread along the west coast. Shorebirds (including a very small number of Spoon-billed Sandpiper) begin to build up at many of the best sites. Numbers tend to be rather lower than in spring except at Saemankeum, though Kentish Plover and Terek Sandpiper often number in the thousands in the southwest. Parties of Black-naped Orioles, the appearance of returning leaf warblers (especially Eastern Crowned and Arctic Warblers) and Grey-streaked and Brown Flycatchers also hint at the start of passerine migration, while Hobby and Chinese Goshawk appear to be on the move by month's end. 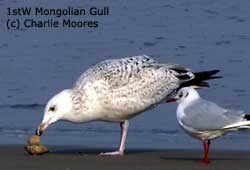 Temperatures begin to cool, especially towards the end of the month, with maxima often falling from 28C to 20c. Sunny, dry weather predominates, though often punctuated by occasional heavy rain and very strong winds associated with typhoons.

The autumn is the start of excellent birding, which goes right through into the winter. Shorebirds are widespread and numerous: highlights include the world's largest concentration of Spoon-billed Sandpipers (which have peaked in recent years at 200, possibly 10% of the total world population!), Nordmann's Greenshank, and up to 170 Black-faced Spoonbills at Kanghwa. The scarce White-winged Black and Whiskered Tern become rather more widespread, along with the first returning Siberian and Mongolian Gulls. Raptor migration includes large concentrations of Chinese Goshawk making their way towards Japan (where 59 000 have been recorded in one day at Tsushima, only 40 km south of Busan!), along with smaller flocks of Grey-faced and Oriental Honey Buzzards. Passerines become rather more numerous, including good numbers of Yellow Wagtails and Pechora Pipits and the first returning buntings towards the month's end.

Warm (typically between 15-20 C mid-month), with often excellent birding weather: dry, sunny, and relatively calm. Occasional rain, although uncomfortable for birdwatchers, can produce excellent falls. One of the best times to be birding in Korea! 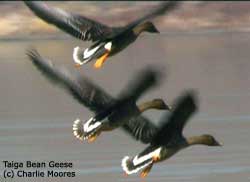 Autumn migration is in full swing, and anything is possible! Black-faced Spoonbill and Chinese Egret are still reasonably widespread. Hooded and White-naped Cranes start moving south into Korea, with several thousand in the DMZ. Huge concentrations of Tundra Beans and Greater White-fronted Geese form at the Han-Imjin and Seosan. The charismatic Baikal Teal arrives in force mid-month, with up to 200 000 at Seosan! Raptor migration is often strong, with Grey-faced Buzzards, Oriental Honey Buzzards, the occasional eagle, Hobby and the odd Amur Falcon. Shorebirds are still present in good numbers and diversity, with a peak in Nordmann's Greenshank. Visible migration peaks with Olive-backed Pipits becoming very numerous by mid-month along the west coast, plus good numbers of buntings and flycatchers. Pale, White's, and small numbers of Dusky Thrushes are also on the move, along with the first of the typical winter passerines, Brambling and Siskin.

Waves of colder air cause a sharp drop in temperature, especially from mid-month onwards, when maxima can be as low as 8-10C: the last of the autumn migrants are joined by huge numbers of wintering waterbirds.

Numbers of Baikal Teal continue to build, along with geese (many of which move on into China). Swan Geese peak at the Han-Imjin (with 1000-1500 in recent autumns). Buzzards and Cinereous Vultures start to arrive for the winter, along with gulls (Saunders's, Siberian, Vega, Mongolian and Slaty-backed are all widespread), cranes. and passerines, including Siberian Accentor. Movements of alcids, most especially Ancient Murrelet, can be impressive. Passerines include many late summer visitors until the second week of the month, when winter species, such as Chinese Penduline Tit and Pallas's Reed Bunting start to predominate.

And from here, it's back into the winter, and some of northern Asia's best birding.

For more details, information about tours, a photo gallery, trip reports etc, try our website: www.wbkenglish.com. Or contact Nial direct at spoonbill@hotmail.com, or Charlie at info@wbkenglish.com.