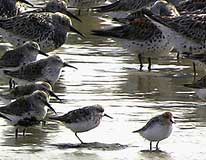 by Nial and Charlie Moores (www.wbkenglish.com).

As autumn shorebird passage picks up along the East Asian - Australasian Flyway, birders in Korea are once again heading to Saemankeum, a vast inter-tidal wetland linked inextricably with the future of species such as the rapidly declining Spoon-billed Sandpiper - indeed already this autumn six "Spoon-billeds" have been seen there (22nd August, pers obs NM). Considered to be of critical importance to the very survival of this endangered species (Tomkovich et al 2001), the sad truth is that the future of Saemankeum itself currently hangs in the balance too. Read also Charlie Moore's inspiring personal tribute to Saemankeum and it's special visitor (click here)

The Yellow Sea eco-region, comprising the coastal wetlands and marine areas of South Korea, North Korea and China, is listed in WWF's Global 200, and has been selected as one of the focal ecoregions in the Asia Pacific. Despite extensive reclamation projects, increasing pollution and unsustainable resource use, the Yellow Sea Ecoregion still contains more than 1 million ha of tidal-flats, supports a massive fisheries industry and maintains internationally important concentrations of a significant percentage of East Asia's migratory waterbirds (Moores et al. 2001). In many respects it can be considered the East Asian counterpart of North Europe's Wadden Sea. Within this eco-region, one of the most important known sites for biodiversity is located on the west coast of South Korea (centred at approximately 35 Deg 50'N, 126 Deg 45'E): Saemankeum. 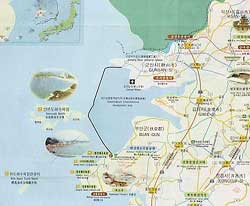 Comprising the two free-flowing estuaries of the Mangyeung and Dongjin rivers, the Saemankeum (pronounced "Say-Man-Gum" in English) wetland consists of some 30 000 ha of tidal-flats and 10 000 ha of shallows, and supports possibly 30 species of waterbird in internationally important concentrations. No less than 8 of these are believed globally threatened (Asia-Pacific Migratory Waterbird Conservation Committee, 2001). Significant waterbird counts include a peak of over 60 000 Great Knot Calidris tenuirostris ca 20% of the total world population), over 700 of the Vulnerable Saunders's Gull Larus saundersi, up to 200 of the fast-declining Spoon-billed Sandpiper Eurynorhynchus/Calidris pygmeus, and the world's highest recent count of the Endangered Nordman's Greenshank Tringa guttifer. By 1998, at least 158 species of fish and 64 species of benthos had also been recorded in the area.

With such outstanding importance for biodiversity (being considered, for example, the most important known site for shorebirds in the whole Yellow Sea by the region's Shorebird Working Group, Mark Barter in lit; Barter in press 2002), it would be expected that the South Korean government, in fulfilling its obligations to both the Ramsar Convention (ratified in 1997) and the Convention on Biological Diversity (ratified in 1994), would ensure the area's conservation. This would mirror conservation initiatives in Europe, whereby the Wadden Sea became both a National park (shared by three countries) and a Ramsar site.

In stark contrast, however, the entire area of 40 100 ha (two-thirds the size of the Wash in the UK) is presently being reclaimed, in the world's largest known coastal wetland reclamation project.

First dreamt up in the 1970s, a more formal reclamation plan was endorsed by the then military government in the late 1980s, with the stated aims of (1) increasing national territory (despite the tidal-flats already being part of South Korea) and (2) of creating more land for rice culture, thus assisting in national food self-sufficiency. Although the latter can be considered a noble aim, a subsequent gradual shift in national diet away from rice, combined with advances in rice-growing technology, has led to a massive annual rice surplus in South Korea since 1996, estimated to reach 1.9 million tons by October 2002 (Korea Herald, July 27 2002). The surplus, twice that advised by the Food and Agriculture Organization, even threatens a rice price collapse, endangering farmers' livelihoods nationwide unless the government can act swiftly to reduce it. Meanwhile, the regional fisheries industry, supplying a multitude of "products" taken from tidal-flats and shallows, ranging from seaweeds through shellfish and crabs to fish, is already in significant decline, threatening the livelihoods of many fisherfolk and their community culture. This situation will be severely worsened by the conversion of many harvested species' egg-laying and nursery areas into rice-field.

The first phase of the project (the construction of an outer seawall, wide enough to take two lanes of traffic and over 5m high) started in 1991, and despite increasing concerns is still ongoing in 2002, with 60% of the 33 km long wall already completed. As proposed the wall will eventually dam off both estuaries in order to create 28 300 ha of rice-field and industrial land, and 11 800 ha of barrage lake. It should be completed by about 2004-2006, with the conversion of the tidal-flats to rice-fields following a few years later. 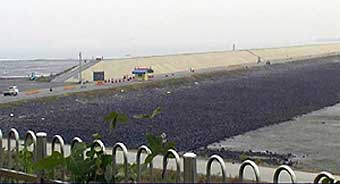 Construction costs of this outer wall alone already exceeded 2.3 billion dollars by 2001, with anticipated future costs many times higher still. Progress of the project has not been smooth, with both significant financial and time overruns. Opposition, both popular and expert, also continues to grow. The whole project was even temporarily suspended in 2000 to allow for some further research on possible environmental impacts by an expert panel, a move prompted by the failure of other similar, smaller reclaimed areas. These include the 17 000 ha Shihwa reclamation, already given up the government in 2000 as unusable for agriculture because of water pollution and other related technical problems.

The so-called Saemanekeum expert review panel concluded after a year of intense review in 2001, contrary to government expectations, that this project too would inevitably produce significant environmental problems, including increased water pollution, declines in fisheries and impacts on other wildlife. The majority of the panel therefore called for the project's cancellation. They were prevented several times from making public their findings. After a series of delayed announcements, the government then dismissed all controversy and opposition and on May 25, 2001 the Saemankeum reclamation was restarted in "an environmentally friendly way" (government spokesperson, Korea Herald, May 26, 2001).

A year later, and the government of South Korea still has not addressed the issue of loss of biodiversity, instead insisting (1) that it is too late to turn the project back, (2) that local people want the development and (3) that the only environmental issue remains maintenance of adequate water quality in the barrage lakes to allow for eventual irrigation of the rice-fields. In line with other such projects, there will be no compensation for the project, beyond one-off payments to fishing communities for the loss of their fishing rights, and no significant modification of the design. Informed sources confidently identify regional politics and favoritism rather than national food self-sufficiency or smart economics as now being the main drive behind this project. The incumbent president (Nobel Peace Prize winner President Kim Dae-Jung) hails from the province that neighbors Saemankeum, and was voted into power on the promise of providing massive funding for regionally popular developments, in order for the "under-developed" southwest Cholla provinces to catch up with the already well-funded rival Kyeongsan Provinces and the affluent Seoul/Gyeongii region. His presidency comes to an end within a few months, and with this change, the possibility of cancellation again increases.

The reclamation continues to be opposed within Korea by the majority of Korean people, by all of the country's environmental groups (who though somewhat dispirited continue to push for the cancellation of this devastating project with regular protest marches and demonstrations), privately by the two main Ministries responsible for wetland conservation in South Korea (the Ministry of Environment and the Ministry of Maritime Affairs and Fisheries), and by a significant number of international NGOs outside of Korea: all recognize that the project will deal a significant blow to the ecological character of South Korea's west coast, leading to declines in the overall populations of several populations of migratory waterbirds. Wetlands International, Birdlife International, the RSPB, and Friends of the Earth International have all sent letters of protest too.

We at WBKEnglish will also continue to appeal to the broader international community to carry on educating their own governments and to the media to help make the Saemankeum reclamation a major international issue. Loss of intertidal wetland has already reached critical levels in East Asia and Governments show little sign of halting the destruction - in August 2002 Japan, for example, announced plans to re-commence the reclamation of Isahaya Bay on the Ariake Sea: it's estimated too that perhaps a staggering 400,000 ha of Chinese Yellow Sea tidal-flat has been lost or reclaimed in the last fifteen years. What will happen to species dependent on the rapidly disappearing staging sites along the East Asian - Australasian Flyway if the seagates at Saemankeum are eventually closed?

For the sake of global biodiversity support the fight to save this vital area. Visit it, write about it in Trip Reports, photograph it, talk about it. With the help of the international birding community, maybe the Spoon-billed Sandpiper and the Nordmann's Greenshank will outlive the people reading this today.