(and an urgent plea for help) 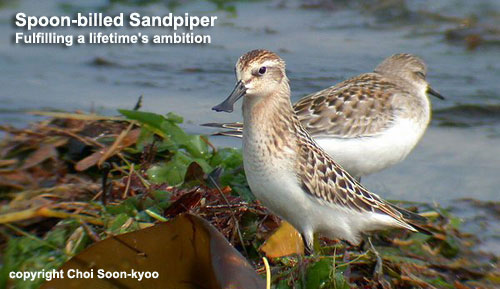 
Spoon-billed Sandpiper - one of my dream birds. But where to go and see one? There was an overwintering individual near Bangkok last winter, a juvenile well photographed in Japan last autumn, the huge Chilka lagoon in eastern India but all rather 'uncertain' for guaranteeing success.

It was the 'Save Saemangeum' campaign that has been buzzing round the internet newsgroups that attracted my attention. The South Korean government is building a huge barrage across the mouths of two rivers, to enclose an inter-tidal estuary area 65% the size of The Wash.
Nial and Charlie Moores are campaigning vigorously against this approach and have a web-site (www.wbkenglish.com) promoting their work for the conservation of wetlands and birds in South Korea and the broader Yellow Sea eco-region.

It was through this site that I discovered that Spoon-billed Sandpipers, in some numbers, depend on Saemangeum as a staging site on their way to and from their breeding grounds.

So, a wetland site with high numbers of Spoon-billed Sandpipers in spring and autumn, but under threat of disappearing completely in the next 2-4 years, no time to lose then. On e-mailing Nial Moores, resident in South Korea, I got the answer "if you can get here at the end of this month (September 2003) there are 3-4 days of very high tides when the chances of seeing Spoonies will be very high. I'm leading a group of Swiss birders and I'm sure they won't mind if you come along".
I had been planning on going in 2004 but the temptation! So, I made contact with the Swiss group who were fine about me joining up, especially as I could drive. It was agreed that spending 7-8 days in South Korea would give me the chance of seeing not only the Saemangeum area but also get to grips with some magical Siberian migrants migrating through South Korea.

Arriving late morning on 27th September I met the rest of the party who had been birding for 5 days and already had an impressive list of birds under their belts. However, Saemangeum and 'Spoonies' were the main priority for everyone and after a three hour drive we arrived at Okgu late Saturday afternoon just in time for the first of the big tides. On a series of salt pans beside the estuary there was already a large flock of waders roosting close to the road and we stopped to scan them. Before I'd had a chance to unpack my tripod from the suitcase someone called 'I've got a Spoon-billed Sandpiper' and all hell broke loose as we all tried to get on it. Suddenly, there it was in my 'scope - standing quietly, moving its head from side to side in a characteristic way, even when roosting, and showing that beautiful little spatulate bill. We all went quiet as we drank in the detail, realising how fortunate we were to be watching one of the world's most endearing and rare waders.
Then we started to look through the rest of the flock and there were more. Scattered amongst the Kentish Plovers, Mongolian Plovers, Broad-billed Sandpipers, Pacific Golden Plovers, Dunlin, Far Eastern Curlew, Grey Plover, Red-necked Stints and Great Knot we all had the pleasure of discovering our own 'Spoonies' - at least seven birds in total that evening, including three juveniles - signs of at least some success during the breeding season. Over the course of the next three days we saw 40 species of wader in and around the threatened Saemangeum area, including the endangered Nordmann's (Spotted) Greenshank, Long-toed Stint, Painted Snipe, and other endangered waterbirds such as Black-faced Spoonbill and Chinese Egret as well as more than 20 Spoon-billed Sandpipers (For a species with an estimated world population of only 2,000 seeing 20 at Saemangeum classifies it as important bird area under the RAMSAR criteria*).

The sights and sounds of birds feeding, flighting and roosting on the Saemangeum estuary, even seeing the spoon of a Spoon-billed Sandpiper in flight, is a memory that will remain with me for a long long time and one that I would like to experience again in the future.

The good news is that work on the Saemangeum barrage, the world's largest reclamation, has been suspended. A South Korean Court ruled that the reclamation is illegal and must be halted immediately, but the Government has appealed. The court date has been set for October 31st 2003. If the appeal is won, we could lose the Spoon-billed Sandpiper, and other species forever.

However, it is vitally important not to be complacent - please go online and sign the online petition, before October 31st if possible, to try and save Saemangeum, or send me your name and address and I'll do it for you. For more details about the campaign, go to http://www.wbkenglish.com/saemref.asp and to sign the online petition go to http://www.wbkenglish.com/petition01.asp

A second thing you should do - go and experience South Korea for yourself. See Spoon-billed Sandpipers, Nordmann's Greenshank, 40+ species of wader, and give yourself the chance of seeing other Siberian 'crackers' such as Siberian Rubythroat, Dusky Thrush, 6 species of pipit, Mugimaki Flycatcher, 30,000 Baikal Teal, Lesser White-fronted Goose, Swan Goose - 175+ species in 8 days - fantastic, but that's the subject for another article.

If you would like more details about any aspect of my trip, or about Saemangeum, please email me, Dave Parmenter, at zoothera1@yahoo.co.uk.

*The Ramsar Convention waterbird criteria states that for a site to qualify for listing as a Ramsar site, an internationally important concentration of waterbirds must occur there: this is 20 000 (or more) individual waterbirds, and/or 1% of a population (NOT at least 20,000 of that species). The distinction is important as for a threatened species such as Spoon-billed Sandpiper, 1% of a total population of 2000 or less means an "internationally important concentration" is only 20 individuals. Ramsar also accepts that flyways, while including mixing and some crossovers, are to be treated as containing more or less distinct populations. These can be populations of a full species or of a subspecies.