Around 144 species of birds have been recorded in the Republic of Maldives; many of these birds are stragglers and only few birds breed here. Situated in the Indian Ocean between 72 degrees 33' 40" East to 73 degrees 45' 20" East and 7 degrees 06' 38" North to 0 degrees 42' 31" South, this is one of the smallest countries in Southern Asia, and is roughly situated south-southwest of India. The total area including land and sea is about 90,000-sq km. of which about 2% are land. The length of the archipelago is 823 km while it is 130 km at its greatest width. The population is 310,764 (July 2001 est.), and the capital is Malè, situated in the North-Malè-Atoll, the capital city has a population of 70.000 and is 1.5 sq. km., and is probably the smallest capital city in the world. 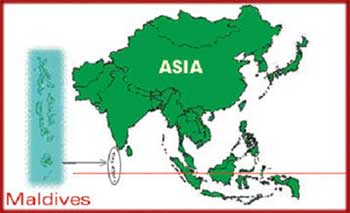 The Maldives is a chain of coral atolls formed upon minor elevations on the Chagos-Lacadive submarine plateau, which ascends from the deep Indian Ocean. The plateau has provided a base for the reef building corals, from where they have risen to the surface. There are a total of approximately 1,190 coral islands grouped into 26 atolls (200 inhabited islands, plus 80 islands with tourist resorts), with an average elevation of about 1.6 meters above mean sea level. All of them are surrounded by natural reefs, which serve as the only protection against rough seas. The islands are generally flat with very few mounds. There are no hills, mountains or rivers. Some of the larger islands have small fresh-water lakes while others have brackish water with mangroves along the edges. The lowest point is the Indian Ocean 0 m and the highest point is an unnamed location on Wilingili island in the Addu Atoll this is 2.4 m above sea level.

Treats for the island are depletion of freshwater aquifers threatens water supplies, global warming and sea level rise (80% of the area is one meter or less above sea level) and coral reef bleaching.

The language spoken is Maldivian Dhivehi (dialect of Sinhala, script derived from Arabic), English spoken by most government officials, and the Rufiyaa is the currency over here. Tourism, Maldives largest industry, accounts for 20% of GDP and more than 60% of the Maldives' foreign exchange receipts. Over 90% of government tax revenue comes from import duties and tourism-related taxes. Almost 400,000 tourists visited the islands in 1998. Fishing is a second leading sector.

The Maldives were long a sultanate, first under Dutch and then under British protection. The Maldives became a republic in 1968, three years after independence (26 July 1965). A visa is not required for the Maldives.

During 1999, vaccination against yellow fever, cholera and tetanus were not necessary but there is no harm in taking it.

The Climate is tropical; hot, humid; dry, and has a Northeast monsoon from November to March and rainy from the Southwest monsoon from June to August. Take care in the sun because it's almost right above when shining, because you're very close to the equator.

The cheapest way to fly to the Republic of the Maldives is to take a charter, for example from Amsterdam (NLG 1500) and take a package this can be either a week Sri Lanka and a week Maldives ore two weeks Maldives. In total it took for me about NLG 2200. This includes breakfast and supper. Notice that drinks and food other than breakfast and supper are not for free, and prices are fairly high.

On the island where you're staying you got chances to get out on snorkelling trips ore sightseeing trips, these are not expensive and can bring you some nice species.

While looking on the internet and various other sources I couldn't find any bird reports from the Maldives. The only information I could collect was in species chapters from the Birds of the Indian Sub-continent from Grimmett, Inskipp and Inskipp. In here I could see that in total 144 species have been recorded, and most of these species included shorebirds and stranglers. Few breeding birds can be found here. Crab-plover, Lesser Frigatebird, White Tern and Audubon's Shearwater are the most spectacular breeders.

The 144 species recorded on the Maldives are as follows:

Of these, 3 are introduced. I also saw 2 new species for the Maldives: Rain Quail and Citrine Wagtail.

I went with a girlfriend to the Maldives for a relaxing holiday, and combine it with snorkelling and diving. The Maldives are well known for the fascinating coral reefs and the hundreds of species of fish that can be found there. Also I did my best to see as many bird-species as possible, although the number of birds was very low. Despite that I saw 7 new lifers. We stayed at the island Lohifushi situated on the eastern side of the North-Malè-Atoll. This island is about 800 meters long and 350 meters wide, and is about 20 km from the capital city Malè.

The temperatures were around 25°C during our stay during daytime and it cooled down to 18°C during the night. Most days where sunny in the morning, and overcast in the afternoon. We had no showers during our stay. And no windy days at except for the last day.

We departed from Amsterdam in the early Morning and flew to Muscat (Oman) and from there we went to Colombo (Sri Lanka) and from there to the Maldives (an 8 hours flight). The stop at Muscat was in the night and nothing was seen from the plane. The stop at Colombo was productive and brought me Hill Swallow, Oriental Skylark, Cattle Egret, Common Kestrel, House Crow, Common Myna and Red-rumped Swallow during the one hour stop we had. Three new species for me.

We landed at Hulule where the international airport from the Maldives is situated. Here we stepped into a small boat (motordhoni) to take us to our final destination - our holiday island. The sea-ride with this small boat took a 1.5 hours of travelling. Despite little wind the trip was rough because some times it has to cross some lagoons between some atolls. We arrived at the island Lohifushi where we booked our accommodation. A quick walk around the island brought me one bird species, a nice Cinnamon Bittern. This was a new species for me.

After a good night of sleep, I went up and circled around the island (it took ten minutes). Few birds were seen during this round and few birds proved to be resident. In total 2 Whimbrels, a Pallid Swift together with a Little Swift, 2 Barn Swallows, 1 Common Sandpiper and 4 White Terns were seen. Also a few resident Asian Koels where present. The last one was a new species. The rest of the day was just relaxing - reading and sleeping. It was clear to me that is was going to be hardwork on the island to see any birds at all. Most of the times there are no birds at all in the sky.

This morning I started off with seawatching and I saw in two hours of counting, endless streams of water and only one bird a Lesser-crested Tern (a new ssp for me). Sea watching during the rest of the week produced no seabirds at all! Further exploring the island brought me a few Grey Herons (they looked paler than our European birds, maybe because of the amount of sun) and a Common Sandpiper and a few calling Asian Koels. They last one was a new species for me.

As I heard in the previous day a few people mentioned to me that on the soccer-field in the centre of the island in the early morning various birds are present, so I was planning to check this out this morning. And the birds didn't let me down. I found at close distant a few Pacific Golden Plover, Lesser Sandplover, Greater Sandplover, about 15 Ruddy Turnstone, Eurasian Oystercatcher and some Common Sandpipers. While walking back I had a close encounter with a Rain Quail which ran in front of me (this bird was seen also by various other people that day). A trip around the island brought me a hunting Oriental Pratincole, a few Barn Swallows, Grey Heron, about 5 Little Heron, Asian Koel and some Whimbrels.

This morning I got up early and went directly to the soccer-field where I could see again Lesser and Greater Sandplovers (Lesser are more common), Pacific Golden Plover, Whimbrel, Ruddy Turnstone and Common Sandpiper. Also a few Little Herons, Grey Heron. Barn Swallow and Asian Koel could be seen today.

Again in the early morning to the soccer-field. The regular species where encountered but 3 Kentish Plovers were a surprise. Also a few Lesser Sandplovers, Pacific Golden Plovers, Whimbrel, Ruddy Turnstone and Common Sandpiper. Around the island I found Barn Swallows, Grey Herons, Asian Koel and Little Heron.

Today I went out diving and snorkelling, it was really great in the fantastic house-reef of the island, like in previous days many species of fish were around and also some Reef-sharks.

Only the commoner species mentioned in previous days were seen. Also 3 Greater Sandplovers were again on the soccer field. The birds are here until the tourist start walking to the restaurant for breakfast and then they depart to an unknown location.

In the early morning a quick check of the soccer-field brought again the same species as in the earlier days, also the same birds could be found on the rest of the island.

At the end of the morning I went out by boat onto the coral reef where a small group of Saunder's Terns, about 10 Lesser Noddy's, a few Black-naped Terns and about 5 White Terns were seen. Snorkelling brought me a unforgettable sight of thousands of different fishes on the reef (inner- and outer reef visited)

An Indian Pond Heron was present today, and also the commoner species as in earlier days.

A quick check in early morning produced at the soccer field a nice Indian Pond Heron, and a real surprise - two Caspian Plovers amongst the commoner species.

The same Indian Pond Heron as yesterday was still doing the rounds around our house. The normal things were seen at the soccer-field and also both Caspian Plovers were still around. Today only the commoner birds where seen during the rest of the day.

Today the last full day at The Maldives and except for the normal species Like Lesser and Greater Sandplover, Pacific Golden Plover, Barn Swallow, Grey Heron, Common Sandpiper, Little Heron, Turnstone, Common Koel and Whimbrel I located a fine first year male Citrine Wagtail. This bird I could study for a short time before it flew of to the next island.

Today we packed and departed early from the island. Because of strong winds there was some swell on sea and the trip was pretty rough. After 1.5 hours of travelling we arrived at the airport and soon afterwards we departed from this fabulous island-group. Before we left a nice group of 8 Caspian Plovers waved us goodbye at the airport. On the flight back we had a night stop at Muscat and arrived late at night in Holland back.

Birds recorded on the Maldives