This report covers a three week trip made by Pete Antrobus, Michael Edgecombe, John Gregory, Jane Whittaker and myself to Nepal. The main aim of the trip was to bird the Langtang Valley and Gosainkund Treks. We had number of free days around Kathmandu when we made several visits to the Phulchowki area.

Mike, John, Jane and myself, flew from Heathrow with Royal Nepal Airlines. Pete, a late addition to the team, was unable to get places on our flight so flew from Manchester with Pakistan International Airlines. Pete should have arrived on the 2/5 a few hours after us. Due to a late flight from Manchester and a missed connection, he was stuck in Karachi for two days!! This delayed the start of our trek by one day. Due to Petes late arrival our guide, Dan, could not obtain Petes trekking permit before we set off. Luckily Dan arranged for a colleague to obtain the permit and bring it to us.

Transport to and from sites in the Kathmandu valley, such as Phulchowki and Godaveri Gardens, were made by local taxis. These proved quite cheap especially when split between several passengers. The buses used to and from the trek were arranged by our guide, Dan. We also hired bicycles for one morning, from just outside the Kathmandu Guesthouse at a cost of a couple of pounds
Food

All meals on the trek were provided by our own cooks, In Kathmandu, we ate at several restaurants, patisseries near the hotel and at the hotel itself, all of which proved cheap, good food. Beer, bottled water and soft drinks were readily available.

In the Kathmandu valley it was mostly dry during the morning/early afternoon (one morning of light showers) but in the late afternoon/evenings we had heavy rain on several days. The days were hot, more noticeably in the period after the trek, when shade temperatures reached the high 30's.

It was mostly dry on the trek, but there were a few showers , mostly in the late afternoons. On the higher ground these were often hail of even snow, with a couple of inches of snow falling overnight at Kyanjin Gompa. Temperatures varied greatly depending on altitude, from mid 30's in the lowlands to below freezing, at night, on the high sections.

I packed a wide range of clothing, from trekking sandal and shorts to walking boots and a set of thermals, fleece jacket, a good waterproof coat, gloves and a warm hat. All of which were used. I took a four season Sleeping bag which was much appreciated at the higher stops. I also carried a camcorder and lightweight tape recorder with a separate microphone. We also had two telescopes between us.

The main field guide that I used was A Pictorial Guide to the Birds of the Indian Subcontinent, this covered all the species, but contains very little text. Mike and John also had copies of Flemmings 'Birds of Nepal' which has been out of print for many years. We also had notes on some of the more difficult species eg Rosefinches, which we took from 'A Guide to the Birds of Nepal' by Tim and Carol Inskipp.
We also had copies of the Lonely Planet Guides to Nepal and Trekking in Nepal.

For the trek we used the services of a Nepalese guide, Dan Tamang who Mike contacted from the UK.

We stayed in teahouses but took our own cook and food, the only items we had to buy during the trek were the occasional drinks and snacks, such as mars bars.. We supplied Dan with our itinerary and he made all the arrangements, including permits, transport, porters, cook etc. The total cost of the trek per person was US$631 which consisted of:

This is a far more expensive way of doing the trek than doing it yourself, but it makes it much more relaxing and comfortable. The use of porters meant that only a small day sack needed to be carried each day, which made the birding more enjoyable. The use of our own cooks, meant we were guaranteed, good, safe food. We had a core of 13 guides/porters/cooks, which was

The teahouses were all fairly basic, some more so than others. The accommodation was usually composed of a communal dining room, with stove, and bedrooms complete with mattress and pillows. Occasionally all five of us had to share one bed room but we usually had two or three rooms between us Food could be purchased at them all if required.

Our usual daily itinerary would consist of :

Lunch We would take a lunch stop, at a teahouse at around mid day, where our cook(s) would provide us with a hot meal.

We would usually walk at a fairly fast pace through the 'quiet' time of the day and arrive at the next teahouse at around 16.00 to 17.00 where we could bird late afternoon.

03/05 Hired bikes for the morning. Cycled to Pakistan International Airlines office to check which flight Pete was on and then cycled to the Monkey Temple. In the afternoon we hired a taxi and birded Godaveri Gardens at the base of Phulchowki. Arranged hire of taxi for early next morning.

04/05 Left the hotel at 4 am, with the intention of driving to the top of Phulchowki, but the taxis clutch gave out about 3/4 of the way up. Birded from here back down the road. The driver, complete with replacement car returned, at about 11am. The afternoon was spent chilling out and preparing for the trek. Pete arrived early evening.

05/05 Dan had chartered a bus, to carry us, the porters and all the supplies to Dunche. We stopped at Trisuli Bazar for lunch and arrived at Dunche (1966m) at about 16.00, about 8 hours after leaving Kathmandu.

06/05 Walked along the road from Dunche, dropping down into the valley to cross the river (1600m). Then climbed to Bharku(1850m), where we started the trail to Sybaru, and the Langtang valley. The initial section of the trail climbs quite steeply to the top of a ridge, there is a tea house here, where we stopped for lunch. The trail is then relatively flat until Sybaru (2150m. Highlights: Wedge-tailed Green Pigeon, Pied Ground Thrush - 4 between Dunche and Bharku, Brown Dipper, Blue Capped Rock Thrush, Gold-billed Magpie, Indian blue Robin and Red-headed Bullfinch.

07/05 Leaving Sybaru, the trail drops into a valley and crosses a small river and then climbs back up on the opposite side. We stopped at the second of two tea houses (2500m), for cokes and eye level views of an excellent feeding flock. After this tea house, the trail descends steeply for about 400m into the Langtang valley, crosses a landslide and eventually crosses the Langtang river itself (2240m). The trail then climbs steadily to Lama Hotel (3000m) , where we spent the night. Highlights: Yellow-rumped Honeyguide (check the massive bees nests on the cliffs), Long-billed Thrush (outside Lama Lodge), Little Forktail (a pair on the river just after Sybaru) and Black-throated Parrotbill.

09/05 The trail climbs gradually, crossing with a few small valleys, to Kyanjin Gompa (3850m) where we arrived in time for lunch. Even gentle climbs can seem difficult at this altitude and we were all pretty exhausted when we arrived at Kyanjin. After lunch we dropped down into wide river valley below the village returning late afternoon. Highlights: Ibisbill (river below Kyanjin) and Snow Pigeon.

10/05 Spent the morning exploring the valley which runs behind Kyanjin up to the Khyimjung Glacier. We reached a height of about 4400m, when a blizzard started which forced us to return to Kyanjin quite rapidly. The afternoon was spent around the village. Highlights: Snow partridge and Red-fronted Rosefinch, both around the 4400 m mark above the village.

11/05 Started the return trip down the valley, walking as far as Ghore Tabela. It rained for about an hour mid after noon, after this the valley was 'leaping' with birds (fall?). Highlights: the large number of some species eg 50+ Blue-fronted Redstarts, Black-browed Tit, Black-faced Laughing thrushes and Fire-tailed Sunbird.

12/05 Walked back down the valley as far as Bamboo lodge (2300m), where we spent the night. Highlights were another Rusty-tailed Flycatcher and Spotted Forktail.

13/05 Climbed back up to Sybaru where we had lunch, the trail then climbs steeply to Gardagaon, where we spent the night in a rather basic, and grotty teahouse. In the evening we walked up into the forest above the teahouse, as far as a stone monument, returning to the teahouse shortly after dark. Highlights; Satyr Tragopan (brief views of a male near the stone monument in the evening) and Grey-bellied Tesia (near Bamboo).

14/05 We left Gardagaon, just before dawn for a second attempt at the Tragopan, as Pete missed it the previous evening. We then continued on to Shin Gompa (3250m), where we lunched and spent the night. The afternoon was spent around the village. Highlights: Mountain Hawk Eagle (over Shin Gompa, part of a small passage of raptors), Upland Buzzard, Satyr Tragopan (2 flight views in the wood above Gardagaon)Whites Thrush and Collared Grosbeak.

15/05 Steady, and in places steep, climb up to Gosainkund(4300m). This was the hardest day of the whole trek. The scenery here is quite impressive, especially as all the lakes were still frozen. Highlights: Grandala (several pairs plus large flock just before Gosainkund) and Red-fronted Rosefinch (Male on the lake shore near the teahouse at Gosainkund).

16/05 Left the teahouse shortly after 4am, the early start was partly in the hope of connecting with Snowcock and also to cross the Laurebina Pass whilst the snow fields were still frozen. Later in the day the surface of the snow becomes softer, which makes you more prone sinking up to your knees/waist in the snow. Even this early we still went waist deep in the snow at times! We walked as far as Ghopte, where we spent the night. Highlights: Fire-tailed Myzornis (several around Ghopte, including 1 whilst drinking tea outside the teahouse), Juniper Finch (pair near Ghopte), Plain-backed Thrush (several around the pass, often singing from the top of exposed rocks/cliffs).

17/05 We spent all morning around Ghopte and walked as far as Tharepati in the afternoon. Highlights: more Fire-tailed Myzornis around Ghopte.

18/05 Walked to Khutumsang, where we spent the night. The habitat was starting to deteriorate as we entered more areas of terraced cultivation. Highlights: Blood Pheasant, White-throated Needletail & Long-tailed Thrush

19/05 Walked as far as Chisopani, although at low altitude, this was a long hard walk. Highlights: nothing of note.

20/05 Walked to Sundarijal, where a coach was waiting to take us to Kathmandu. This area was supposed to be good for Spiny Babbler, but regular playing of the tape failed to produce a response.

21/05 Chilled out around the Kathmandu Guest House.

22/05 Left the hotel at 4pm and caught a taxi to the Base of Phulchowki, near the Godaveri Gardens. Here we birded a small valley and managed to connect with two parties of Spiny Babblers. Highlights: Spiny Babbler, Drongo Cuckoo & Orange-headed Thrush. Returned to the hotel mid morning. Afternoon Shopped.

23/05 Caught a taxi to Bhaktapur and spent the morning around this historic city. 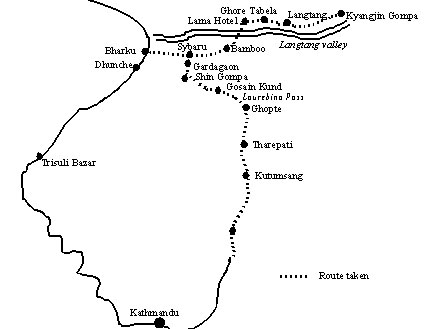 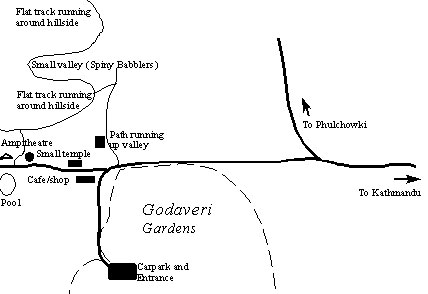 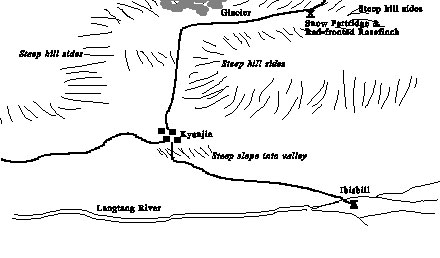