This report covers a trip made by myself along with, John Gregory, Michael Edgecombe, Ashley Banwell, Richard Walker (17/07 to 02/08) and Peter Antrobus (12/07 to 25/07) to Sulawesi and Halmahera, Indonesia. We flew Heathrow to Manado, via Singapore with Singapore airlines.

12/07 Arrive Manado mid PM, after booking internal flights and buying food for the rest of the day, we finally left Manado at about 17.00. Drove to Toraut in the Domoga Bone National Park, arriving at around 23.00.

15/07 Am visit to the Maleo breeding grounds at Tambun. Pm around Tarout.

17/07 Flew from Manado to Palu and then on to Kamarora in the Lorre Lindu National Park, spent the evening around the park HQ.

18/07 Spent the day around Kamarora HQ, mountain trail and the waterfall trail.

19/07 Am summit of Anaso logging trail at first light, walking back down the trail until late am. Pm spent around HQ.

20/07 Walked from the road, starting before dawn, and up Anaso logging trail to first clearing. Pm Dongi Dongi.

21/07 Am, road around base of Anaso logging trail. Pm around the HQ.

22/07 Am, Mountain trail. Pm around HQ and waterfall trail until after dark.

24/07 Am, Anaso logging trail. Left Kamarora at about midday for Palu.

25/07 Flew from Palu to Ternate via Manado, night spent on Ternate.

27/07 Am, road between the home stay and the restaurant. Pm, road from restaurant to first logging trail beyond the summit.

28/07 Am, Logging trail by the homestead and forest trail. Pm, road from restaurant and second logging trail beyond the summit.

30/07 Early am, Purple Roller site, late am, mangroves off Sidangoli. Pm, logging trail by rest house followed by forest trail until after dark.

31/07 Am, Paradise Kingfisher site. Pm ferry back to Ternate.

The journeys between Manado/Tarout and Palu/Kamarora were made by jeeps, which had been pre-arranged from the UK by Mike. The journey to the Maleo site from Tarout was arranged through the local guide. The travelling around Lorre Lindu NP was done by a jeep, which was booked for the duration of our stay. The journey from Sidangoli to the homestead was made by minibus, arranged on our arrival at Sidangoli. The travel to the various sites on Halamhera was arranged by Anu. Taxis were also used for short journeys such as hotel to airport. The journey from the restaurant back to Sidangoli was made by the restaurant owner's minibus.

The internal flights with air Bouroq could not be booked from the UK, so these were booked as soon as we arrived at Manado, luckily the office opened on Saturday afternoons. The total cost of the flights: Monado/ Palu return and Manado/Ternate return was about £160.

Being a vegetarian most meals consisted of fish vegetables and rice, conveniently fish was served for most meals without being asked for. Everywhere we stayed served boiled water, with bottled water being readily available in towns and restaurants.

Hot and humid except for the around Anaso in the Lorre Lindu N.P. where it was cold early in the morning, due to the altitude, trousers and jumper or coat are needed here. It rained daily at Domoga Bone, usually for a couple of hours around late morning/early afternoon. At Lorre Lindu N.P. it rained on a couple of days for an hour or so, again usually around late morning/early afternoon. On Halmahera it only rained on one day for about half an hour late one afternoon.

Field Guides: 'The birds of Sulawesi' published by OUP, ISBN: 983-56-0005-8 and A guide to Wallacea, Sulawesi, the Maluccas and lesser Sunda Islands, Indonesia published by Dove Publications and the Lonely Planet Guide.

Very little problem on this front, no leeches. The only problems were on the forest trail at Kali Bati Putih, where mossies were a real menace. Use plenty of repellent and wear long sleeves and trousers. Malaria can be a problem so always sleep under a mossie net.

The park lies in the North of Sulawesi and is about a five-hour jeep drive from Manado. It can be reached on public transport by catching a bus from Manado to Kotamobagu (3 hours), bus from Kotamobagu to Dolodua (2 hours) and then a microlet to Tarout. We stayed at the very comfortable government run complex at Tarout. Accommodation was in double rooms with shared WC and showers. All our meals were taken at the excellent restaurant here. The cost was approximately £10 per day, which covered all the food, drinks, beer and accommodation. We did not even use the mossie nets here as the rooms were so well protected (good netting over the windows etc). The birding here was primarily on the forest trails on the opposite side of the river, which was crossed by wading the thigh deep river. NOTE: after prolonged heavy rain the river can rise quite considerably and can become very difficult (impossible?) to cross, Mike nearly became stranded on the far side, on our last morning.

We also birded the area along the road to the dam and around the pools.

You are supposed to be accompanied by a guide in the forest. This was useful on the first day or so as it enabled you to get used to the maze of paths. After this we all tended to bird on our own, which is difficult for a single guide to cope with, but he did not seem to mind as long as he was paid. 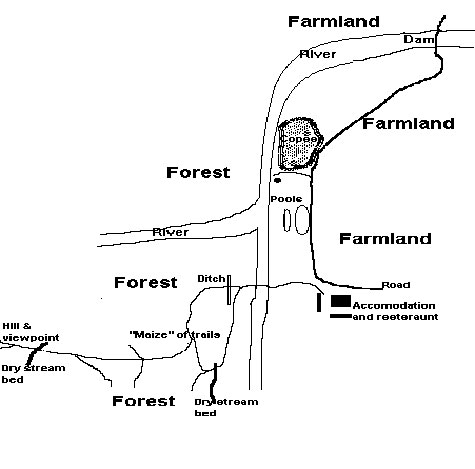 The park is situated in central Sulawesi and is about two hours jeep drive from Palu. A bus runs from Palu to Kamarora several times a day. A permit, which can be obtained at the PHPA office in Palu is required for the reserve, ours was obtained on our behalf by Rolex, who met us at the airport. There are directions for the Office in the Lonely Planet guide. We stayed at the Government run HQ at Kamarora, when we arrived the "normal" visitors accommodation was occupied by a birding tour led by Ben King, so we were accommodated in one of the buildings used by the warden and his family. The accommodation composed of a central living area with four adjoining bedrooms, each with two beds with and a single, shared, toilet/wash room.

All food, along with endless supplies tea, coffee and boiled water, was supplied by the warden and his wife.

We retained a jeep throughout our stay, which we could all just about fit in, at a squeeze. We took it in turns travelling up the Anaso logging trail, with the others disembarking at any of the sites en route. The journey to Anaso was about two hours, which meant staring about two hours before dawn (about 5am). The road from to the base of the Anaso Logging trail is tarmacked but the track from this road to Kamarora HQ is not and is in very poor condition in places, this track would probably not be driveable in a car. The Anaso Logging trail is steep but passable by jeep, although some of the ravines are making the track very narrow in places and it may soon be impossible to drive all the way to the summit.

Waterfall trail: Short trail of a couple of Km's which runs from the Kamarora HQ complex.

Mountain trail: Long trail, although I only walked 2 Km or so. This trail starts from the track to Kamarora, just after the junction with the main Palu road and is marked by a yellow sign.

Kamarora track: This is the main track (probably not passable by car) which runs from the Palu road to the park HQ and is about 5 Km long.

Dongidongi: Section of road where the road to the Anaso logging trail road crosses the river. The area from the bridge and for several Km's towards Anaso proved to be very productive for the more lowland species (much better than the Kamarora area)

Base of Anaso logging trail: The section of road from the path to Danu Tembling and for several Km's back towards Kamarora, proved to be very productive, especially for feeding flocks early in the morning.

Anaso logging trail: The whole length of the trail could be productive (the area around the summit being the quietest). The summit to the road can be walked , at a comfortable birding pace, in a morning. 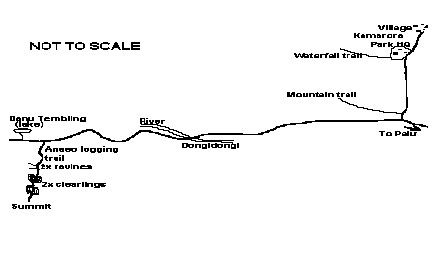 Kali Bati Putih is situated about 10Kms from Sidangoli and is the traditional birding site on Halmahera. We knew Ben King's party would probably be at the homestead, but we were hoping there would still be room for us. There probably was, but the representative from Bens ground agents, (Panda express?) who appeared to run the place, wanted to charge us $70 (USD) each per night! We moved to the restaurant a couple of Kms up the road which was far more comfortable and much cheaper. (Under £10 per night including all food, drinks and lots of beer).

The accommodation here is composed of several chalets in the grounds, each with a large single bed ( fine for a couple but a bit too cosy for two of us). There is a washing area down by the river, but no toilets. The restaurant has plenty of room, comfortable seats, an excellent view across to Ternate, lost of cold drinks and good food.

Forest trail: This trail starts opposite the home stay, the first few 100 metres are through a rough field. The trail crosses a stream and then climbs steeply through the forest for a few 100 metres There is an indistinct fork to the right which leads to the Standardwing leck site. The main trail continues for a further few 100 yds, then flattens out and crosses another stream.

The logging trail: This trail, which starts at the homestead, was birded for several Km's, as far as the second river. It runs through forest edge, secondary forest and scrub. The house by the first river is where Anu was living.

Road from homestead to Restaurant: This section of road is about 3Km's long, but feels a lot further when walking up the steep hill towards the restaurant. A new section of road is currently being built, which meant there was a lot of disturbance, especially as work continued late into the evening. The most productive section of the road was the loop that is being bypassed by the new road. This section runs along side and overlooks some good primary forest.

Road from restaurant to logging trail 2: The first Km or so is a steady climb to the summit of the hill, with a steady descent on the other side down to the logging trail. The most productive area was just either side of the summit.

Logging trail 2: This trail was followed for less than 1 Km and led to an area of recently cleared and burnt forest.

Logging trail 3: This trail was followed for about 500 metres and ran through fairly poor secondary forest and scrub. 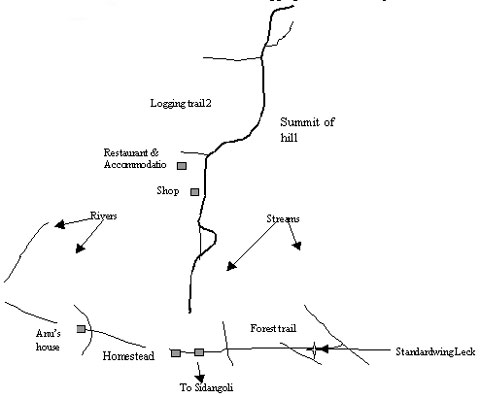 The majority of our time was spent around the above areas but we made several excursions with Anu, for which he arranged a driver and a vehicle:

A coastal /lowland forest site: This was quite productive, but were we saw nothing we did not see elsewhere.
Purple Roller site: We spent of couple of hours here, roadside birding, having ticked the Roller on arrival.

Sidangoli Mangroves: A local boatman took us over the river to the mangroves on the opposite bank, we birded here for a couple of hours, late in the morning. We eventually found our quarry, 2 Beach Kingfishers. After several hours of taping birds in, but not seeing them, we eventually spit into small groups and scored.

This island is about an hours boat journey from Manado and is famous for its snorkelling. We chilled out here on our last day