IT HAS COME TO OUR ATTENTION THAT THE METHOD USED TO SEE THESE BIRDS MAY HAVE INVOLVED ENTERING ILLEGAL WATERS. PLEASE CHECK WITH LOCAL ORNITHOLOGICAL GROUPS AND EMBASSIES BEFORE TRYING THIS TRIP. YOU MAY END UP IN JAIL. 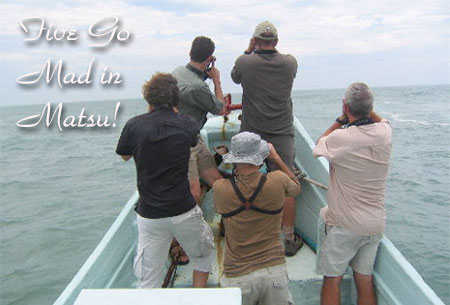 Following my unsuccessful 2001 trip to the Matsu Islands in search of Chinese Crested Tern, I was keen to give it another try especially as they had been seen in the two following years. I had no information on whether the terns were there this year but decided it was worth a try - nothing ventured, nothing gained. Chris as usual was keen to join. Joakim a fellow Hong Kong birder was also keen and suggested that Bjorn, based in Beijing and Nick, based in Shanghai might also be interested, and could tag on an extra day to look for the other Taiwan endemics. In the end we managed to arrange a weekend that was convenient to all, and so five went mad in Matsu on a Chinese Crested Tern twitch.

Our thanks go to all the people who made the trip possible especially Foonie for making all the bookings and Tung for providing details of the boat.

Apart from trying to find a weekend when we were all available, there were a number of logistical problems to sort out mainly because of the language barrier and also as there are a number of different spellings for the same place. The Matsu Islands are a small group of Islands 10km from the Chinese mainland off the Fujian coast NW of Taiwan. The two main islands in the Matsu group are generally referred to as Nankan and Peikan, but Peikan is also called Beigan, which is the name used by the airline. The islands are around 45mins from Taipei by air. A small launch operates between the main islands taking about 20mins to cross between the islands. Until recently the only airport was on Peikan, to which about 5 flights operate daily. However recently a new airport has opened on Nankan, which can take larger planes and has 7 fights daily. As I had only been to Peikan before and hence knew the layout and also had a hotel/boat contact on the island, we decided to go there. UNI Air is the only carrier to the islands. They have a web site www.uniair.com.tw with a timetable in English, but no booking procedure in English. I tried to book the flights through travel agents both in Hong Kong and Taipei but they couldn't help, the only way was to book directly with the airline, tel. Taipei 2518 5166. In the end with the help of a colleague who spoke Mandarin, we managed to book the flights. It appears that if you have time, booking the flights may not be essential as UNI Air operate an odd waiting list system where people just turn up, add their name to the list and wait until there is space on the next flight.

Renting a boat to take us out to the small islands where the terns breed was quite easy as Tung a Hong Kong birder who had been there the previous year gave me the telephone number of a small hotel where he had stayed and who had also helped arrange a boat. Again with the help of my Mandarin speaking colleague we managed after a few calls to arrange a boat and accommodation on Matsu. We were all set to go.

Although the logistics appear complicated, the Taiwanese people are incredibly helpful and there is always someone who can speak English and if they can't help, they will find someone who can.

In hindsight, we could have flown to Nankan as it is a slightly bigger island, there are more flights and if the weather is bad, there is a better chance that flights will leave as the airport is newer and the runway longer. I am sure there would be hotels on the island and probably a greater choice of boats. The boat we used was actually based on Nankan and came across to Peikan to pick us up. It was a large fishing/tourist boat, the owner can be contacted on mobile 0933077630 though they do not speak English. We were charged a whopping NT$8000 for 4 hours but in the end only needed three. If you have a little bit of time, you would no doubt be able to find a cheaper boat.

In Taipei we stayed in a small hotel close to the domestic airport, not far from the centre of town. It was booked through one of the many web sites. Because the trip was so successful we didn't actually spend a night on the Matsu's though there are small cheap hotels on both islands and I am sure there will be no problem finding somewhere on spec.

Food was the usual combination of local fare and junk food.

This was always going to be a crucial factor of the trip, as we had to rely on a boat to take us to the small islands where the terns breed and it was typhoon season. Our fears where justified when 5 days before we were due to depart, a typhoon developed and was forecast to track towards the Matsu's and strike on the day we had planned to be there. Daily if not hourly checking of the typhoon's track didn't raise our hopes, but we all decided that as typhoons are very unpredictable we would go anyway. As luck would have it, a day before we were due to leave, the typhoon changed track and headed north along the east coast of Taiwan and hit Taipei the day we were travelling out. Our decision to go had been vindicated but the typhoon did cause an immense amount of damage to the central highlands, dumping over a metre of rain and thwarting the others attempt to see the majority of the endemics as the road to Wushe has been washed away by landslides.

On arrival in Taipei it was very windy and pouring with rain, however the following morning was dry and the wind had dropped. Once on the Matsu's the sun came out and although there was a large swell the weather did not hamper our twitch.

Chris and myself departed from Hong Kong at 9pm, the others were following later. We arrived late in Taipei after circling for half an hour due to the bad weather, it was pouring with rain and windy. We took a taxi from the international airport to the pre-booked hotel. Checked in and crashed only to be woken an hour later by reception to tell us that the other members of the party had arrived (well I did say the Taiwanese were very helpful) and then by the others texting us to say that they had arrived.

We all met in reception at 5.45am and took a taxi for the 5min journey to the domestic airport. By now the rain had stopped, the wind had subsided and there was no problem with the flight leaving. Had a quick breakfast, checked in and departed on the 06.50 flight to Peikan arriving 45 mins later. We were met at the airport by the lady who had arranged the boat and were taken the short distance to her hotel. There was then the usual discussion regarding price, but we were helped by the fact that the local English teacher was summoned to help. We left our bags at the hotel and were taken to the harbour, a 10 min drive away. Whilst waiting for the boat, our passports were checked. Considering the islands are heaving with military personnel, they were very laid back about the fact that we had bins, telescopes and cameras and we had no problems at all.

Whilst waiting for the boat we scanned a small island between the two main islands where the terns were seen last year. We could see a number of terns flying around the island and our hopes were raised that the birds would be there this year. Eventually our boat arrived, we boarded and directed the captain towards the small island we could see. He was a bit perplexed and pointed to some other islands on his radar screen but went to the small island anyway - we were the customers. As we approached the island it became obvious that the terns we had seen from the harbour were mainly Bridled, Black-naped and Roseate, there were no Greater Crested and our buoyant mood became a little subdued.

After circling the island, we headed to the area the captain had indicated we should go to, which was NW of Peikan. As we approached the area, the number of Greater Crested Terns increased and our hopes were raised. We eventually arrived at a large rock with a small grassy area on top. The upper part of the rock was full of Crested Terns however due to the swell, we could only view the rock from the steep side. Within a few minutes of scanning Bjorn shouted that he had a Chinese Crested Tern flying above the rock. A couple of us got onto it straight away before it dropped down out of sight. During the next half hour we all got reasonable views of at least 3 birds including one flying in with a fish. 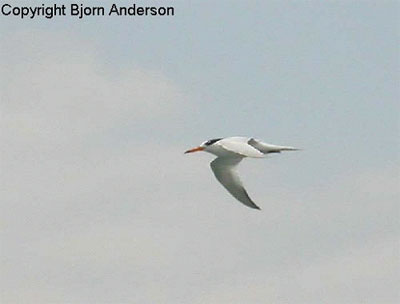 Elated by our success we headed back to the harbour where the transport was waiting to take us back to the hotel.

As there was little else to see, we decided to try and get off the island that day and so walked to the airport and put our names on the waiting list, hoping to get off on one of the last two flights. I am not quite sure how, given that there appeared to be over 100 names on the list and the plane only had 30 seats, but three places were found on the next flight and as Bjorn, Nick and Joakim were going on to the central highlands they went off first. We said our goodbyes and Chris and I retired to play pool and have a beer whilst waiting for the next flight.

Somehow managed to get on the last flight and arrived back in Taipei where we rented a car from an agency close to the airport and found a very nice and relatively cheap hotel. Decided we should try out the Taipei nightlife and so hit the town for a few beers.

Didn't get up particularly early, had breakfast then made our way to the Botanical Gardens where, with the help of the locals, we saw Malaysian Night Heron. Chris was keen to try and see the Taiwan race of Hawami, so we headed to Guanyinshan a high peak on the outskirts of Taipei and spent the rest of the day birding the view point and temple areas. It was quite windy and so not a lot was seen.

Returned to Taipei, dropped the car off and got a taxi to the airport arriving two hours before our flight, a sharp contrast to the 20 mins on our previous visit a month ago. Caught the 18.10 flight arrived back in Hong Kong an hour and half later.

An excellent trip, taking me back to my UK twitching days.