This report is a result of a trip to eastern Egypt that was made by Tomasz Kulakowski and Gabriela Sawicka on 4-11th of April 2002. It was an organised tour (Polish "Aladin" agency) and we mostly used their services.

We reached Egypt after 4-hour flight from Warsaw to Hurghada. We were accomodated at Roma Hotel in one of the "centres" of Hurghada. It was our starting point to all explorations around the region. We didn't know much about local travelling conditions as there were few previous reports from the area.

We arrived to Hurghada at 11 am and moved from the airport to the hotel. On the way we could see some raptors, most possibly Steppe Buzards. The surroundings of the town seemed to be strictly protected by the military troops and local tourism police with guns. It looked funny but also gave us an idea of difference between this place and e.g. Spain. Short walk to the hotel beach and garden produced Laughing Doves which later we discovered as most frequent flying animal as well as 2 Quails hiding behind fallen palm trunk! Just meters from you without any grass to hide! "Poor birds", I thought. Several Pipits and Wagtails also feeded at the beach (actually tiny gardens).

Early morning we went for a short walk along the seaside. It was actually difficult as each hotel located by the water has a separate, "private" beach which is hardly accessible from outside. We managed to cross 3-4 beaches and had to come back to the road. At a small bay we spotted single Sooty Gull. At each path of green grass we could see common European Pipits, Wagtails and Laughing Doves. There were also some nice "feldeggs" - subspecies of Yellow Wagtail.

Then we went by jeeps for an organised "safari trip" to the beduin village. It was quite nice experience. The drivers tried to do their best to frighten passengers by jumping on rocks and dunes and chasing each other, sometimes leaving the wheel without attendance! For some ladies it could be heart-breaking. We made a short stop to see the "fatamorgana" effect, which, in opinion of guides was impossible to catch on film (but we did!).

Later came better stop. Shortly we reached edges of hills. We stopped to climb one of them and I looked up. Whooaa! The skies were full of raptors passing N-NE. I noticed several hundreds of Steppe Buzzards circling high. In the strong wind 2-3 beautiful 1st-year Steppe Eagles passed over my head! Next came adult Egyptian Vulture. I could spend hours on gazing in the sky but we had to go on. It seems that raptors have some kind of migration channel along the hills west of Hurghada as later we could see other "thermals" with numerous Buzzards and some Black Kites, too.

Arriving to the "village" we were greeted by camels and had a short ride on their tops. I noticed some small passerines on the way and further research resulted in finding 1-2 pairs of Desert Lark, 1 White-crowned Wheatear. Larks were quite easy to approach and showed well (photograph). We also spotted a Brown-necked Raven above the village and then also seen well against the ground from the hill. Several Rock Doves seemed to be a real wild ones, surrounded by kilometers of desert.

Very productive one-day trip to the Nile Valley. As in many other places "tourism police" also guarded us and other buses on the way to Luxor. In Safaga buses formed a "convoy" and started to move West. Just out of the town we could see Cattle Egrets on tiny grassland and several Crag Martins.

Many birds during this trip we actually observed from the bus windows. If we had the car observations would be of course much better.

The mountains and hills on the way to Luxor look quite interesting - like piles of red/brown stones and gravel. Trees and bushes are a unique sight indeed! In such places we couls spot single White-crowned Wheatears and BN Ravens. During a short stop in a desert oasis we found a pair of Masked Shrikes and some Warbler (Garden?). The landscape became more flat as we moved further west. There was a flock of 90 White Storks in a thermal. At the edge of Qena town we saw a Spur-winged Lapwing flying over dried channel. As we drove further we could see the channel was surrounded by small cottages, villages and birds. Along all the way from Qena to Luxor we saw colonies of Cattle Egrets, Pied Kingfishers, 1 Green Heron (!) and some other birds, difficult to identify from the bus. After crossing the bridge over Nile River we drove through some nice meadows with groups of palms were we spotted hovering Black-winged Kite. This was also few-seconds-observation which I owe to Gabriela as she spotted and pointed the bird to me!

We reached Mnemmon monuments in Western Thebes. Small parking place was enormously crowded. Orange- and gift-sellers, bodyguards and tourists from different countries. We made some photos and I shortly looked at the fields noticing Masked Shrikes and Isabelline Wheatears.

Then we made a short visit to the "alabaster factory" where some poor people sitting in the burning sun had to show tourists how they make the pots, glasses etc. Prices of the gifts were enormously high compared to the ones from street-sellers. Anyway, we drove next to the Valley of the Kings to visit the tombs. My eyes, of course, wide open for any bird in the sky. We spotted several Pallid Swifts, Rock Martins and 3 Trumpeter Finches feeding near the tombs.

There were also several Martins and Swifts near Hatszepsut Temple.

From the Temple we we went to the Nile River bank and got across the river in a small boat. I noticed a small group of Common Sandpipers but also Pied Kingfisher. I also spotted several Barn Swallows of "savignii/transitiva" subspecies (with brick-coloured belly). We had a short lunch at the restaurant located by the river and then went to visit Karnak Temples. Surprisingly (first about birds) we spotted 2 Little Green Bee-eaters sitting on the palms just over crowds of tourists. From time to time they were collecting insects from the leaves. The Temples are impressive indeed with their countless tall columns, pylons and walls. One may try to identify also the birds depicted there. I noticed some Harriers, Geese and Ducks. Numbers of visitors and languages you may here is difficult to imagine!

Being already quite tired we stopped at the parfume shop to smell and buy some essences of the Middle East. After the shopping we headed east through the desert.

In the morning we went to the small harbour where 2-deck motor-boat was waiting for us. The aim of the trip was mainly diving but it was Gabriela who was really happy about it as I was not really a good swimmer! The weather was excellent with cooling wind and blue-green sea around us. The colour of the water can't be really compared with any other places I visited in Mediterranean or other WP seas. And also it is crystal clean. Right over our heads we had White-eyed Gulls passing, some Lesser Black-backed Gulls and some single other gulls and terns. The Sooty Gull was spotted only few times and seemed to be much less frequent then WE Gull. We passed the coast of some nearby islands and reached quiet lagoon with several boats already on anchors. 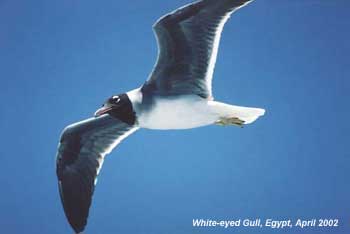 Gabriela spent some time on snorkelling and I did some nice photos of gulls. Then we landed on the beach and had some time for walking on the island. It was totally lacking any vegetation apart of some 20-30 cm dried bushes. I headed there and noticed hiding passerines. After some investigation I identified them as Tawny Pipits and a couple of Isabelline Wheatears. There were also Little Ringed Plovers and WE Gulls on the shore.

After coming back to Hurghada we decided it's time for real rest!

We took comfortable chairs at the beach and pointed binoculars over the water. Gabriela went to the sea soon and I decided to count passing birds. Right after I realised that numbers, especially of White-eyed Gulls were high. Low over water small groups of them were passing NW. I decided to take notes on half-hour basis so to compare migration intensity. The results were really high: 1333 White-eyed Gulls within 2 and 1/2 hours! All passing directly NW. Also 2-3 Caspian Terns feeding along the coast, 1 Squacco Heron, only 2 Sooty Gulls, 9 Whiskered Terns, 44 Lesser Black-backed Gulls and several Swallows. We summed up all the results by the evening drink!

We decided to walk through the town, first early in the morning, then in the afternoon. Both walks were quite productive. In the morning, at the "beach path" I noticed a fight of 2 Laughing Doves, feeding Pipits - Tawny (1st summer) and Tree. No sign of Quail.

In the afternoon we made a "hotel walk" passing the main way with noisy cars. Over a small fresh-water (?) pool we had 1 Bee-eater, possibly Little Green. Then we reached a patio of some hotel with plenty of fresh green grass. What a place for birds! Yellow Wagtails of "feldegg" race, Pipits and Wryneck drinking water from a fountain! But also Kestrels coming from time to time to take Pipits.

We went on through the town and entered some abandoned building field with rubbish. It appeared to be quite interesting place with 1 Woodchat Shrike and 9 Short-toed Larks

Day spent on total "beach counting". Last full day of our holidays must be lazy! At 6 am 1 Quail feeding in the graveyard, 1 immature/female Black-eared Wheatear.

Afternoon phase brought 1 Osprey flying west from the sea into the harbour. I expected much more of them after reading OSME article about Red Sea. One passing Lesser Crested Tern was a new WP species for me! It was an immature bird. Numerous Barn and Red-rumped Swallows allowed me to study their flight and behaviour with direct comparison.

We woke up early morning for farewell and sunrise watching. It was nice and specific, without red colour that we used to see. Onse again thanks to Gabriela I ticked a new bird - beautiful Reef Egret with ash-dots on the wings!

Generally warm (20-30 Celsius degrees) with cooling wind at the seaside (Hurghada). Much warmer (42 C) and no wind in Luxor (real sauna!)

We mostly used organised tours to the desert and Luxor as well as a motor-boat to the islands. Cost of a car rental at Hertz was approx 70-100 USD at that time.

All kinds of green areas should be primarily visited in Hurghada for passerines - Wagtails, Pipits, Quails, Swallows etc.

Empty parcels just outside the hills hold also many birds: Short-toed Larks, Falcons, Shrikes. Early morning (5 am-6am) strongly recommended because of later traffic (car horns!!). I think it is worth checking the hills west of Hurghada for migrating raptors.

A total of 54, including 15 new for me. Most interesting were: