Comments
In October 2001 I undertook a week long survey in a rainforest area in the province of Misiones, very close to the border between Argentina and Brazil. The area consists of low hills and broad valleys covered by rainforest which has been logged in many places yet leaving a secondary growth forest with many tall trees and a thick brush home to myriads of insects, many tropical and subtropical mammals and reptiles and certainly to hundreds of different species of birds. Across the border on the brazilian side, the forest has been mostly cut down and cleared so as to have fields suitable for cattle grazing and cropping purposes.

This South American corner is a "birders paradise" as hundreds of different bird species live and thrive here to the joy and amazement of any visiting naturalist. I had made friends with a visiting swedish student Thomas Svensson, a strong birding enthusiast always willing to learn and broaden his birding knowledge whenever he had a chance. I invited him to come along to bird in conditions he hardly would find again as we would be birding in an area only accessible to loggers and small bush farmers. The possibility to see many birds in a scarcely developed area with magnifficent surrounding nature was a temptation not to be overlooked.

Before dawn we left Buenos Aires by car driving to the north of the country expecting to arrive at our destination in the late evening. The day was misty. By dusk we were already driving through Entre Rios province and birds sightings started inmediately. Ducks, ibises, gulls and pigeons were on the move. Beside the road we saw a couple of Giant Wood Rails, several Grey-necked Wood Rails and the always present Road-side Hawk. Quite often White Monjitas showed up as well as some small flocks of Monk Parakeets. While crossing a large river a small flight of Brazilian Teal flew by. We travelled for almost 800 km with a clouded sky and some rain. The sun showed up at last upon our arrival very close to the border between the Corrientes and Misiones provinces and we started to feel the heat inmediately. Now the road was dry and travelling was a different thing. After driving over 1400 km we arrived in the late evening at our destiny as planned. Bats and nighthawks flew through the car's light cutting the darkness catching clumsily flying insects.

Before dinner we heard some funny screeches coming from outside our hotel so with the help of our flashlights we discovered a Rusty-barred Owl looking at us curiously from the top of the house and moving along the edge of the roof.

On another day at sunset, while I was waiting for the truck to come and fetch us, a Stilt Sandpiper came out flying from a close marsh. This really surprised me but it seems that these birds stay at such places and very often remain undetected. As the sun was getting lower and lower, everything seemed to quiet down and all became silent before darkness would creep in. At this right moment a very lood cackling and calling started in the marsh, it was several Blackish Rails doing their day's farewell act.

One morning several vultures were soaring along a slope and among them we discovered a majestic King Vulture and then on one night while coming back from the forest several Long-tailed Nightjars would fly in front of the car's light cone making funny turns and loops in the air showing their incredibely long feathered tails.

Our backtrip took us along the same road and from the car we managed to make some interesting sightings. After getting into Corrientes province, in an adjacent field quite close to the road we saw a small group of about 6 Greater Rhea feeding. Later before sundown while bordering a big marsh several Long-winged Harriers flying low above the reeds were seen and then we saw sitting on a dead twig a Ringed Kingfisher looking into the water. Now ducks, mainly Teals were flying everywhere seeking shelter for the night. A total of 120 different bird species were seen during the whole week long trip.

Acknowledgements: Many of the birds mentioned in this Report would not have been seen had it not been for Tomas Svensson a birder I invited to this trip, who patiently would find them and then would call me when I was available to take a look. The same stands for many of the pictures illustrating this Report, some of these were taken by Tomas Svensson while on the trip and others by Trevor Feltham, a travelling english birder who kindly sent me some of the bird pictures he took while in Misiones. My greatest thanks to both of them. 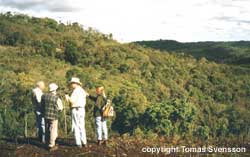