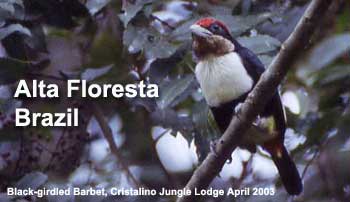 I spent the period 3rd April 2003 - 19th June 2003 as a volunteer guide at Cristalino Jungle Lodge (CJL) as a precursor to embarking on a PhD investigating avian community structure within forest fragments around Alta Floresta. For a review of the site infrastructure and trails systems at CJL see Samuel Hansson's extensive trip report at: http://worldtwitch.virtualave.net/hansson_brazil_2001.htm or see Whitney (1997).
This was my first visit to the Neotropics and the systematic list is biased through a considerable learning curve over that period. As would be expected my lack of prior knowledge of vocalisations led to my missing several species that are not particularly uncommon at CJL - Crainioleuca vulpina, Arremon taciturnus and Saltator maximus for example. Highlights are perhaps too numerous to mention, but the record of one (if not two) Neomorphus squamiger in early June stands out. Indeed spending two months immersing myself in the world's greatest avifauna in such a beautiful (if fragile) location as Cristalino was the highlight in itself. That much remains to be discovered from such a well-known site as CJL is still evident, the implications this must have for the discovery of new taxa from other locations in Brazil - particularly south of the Amazon and east of the Madeira are self-evident. However the massive erosion of the forest, the world's highest absolute rate of forest destruction (Whitmore 1997) threatens the continued existence of this crucible of biodiversity.

First and foremost I would like to thank Vitoria Da Riva Carvalho for offering me the position and for all her help (along with Zuleica Melo) throughout my stay at CJL. The staff at CJL - particularly Nair, Jorge and Francisco and at the Hotel Floresta Amazonica for their kindness and support. I'm particularly indebted for the council of Andrew Whittaker who put up with a considerable inquistion and others who plied me with ornithological information including Braulio Carlos, Silvio Marchini Hank Brodkin, Rasmus Boegh, Aaron Lang, Carlos Peres, Jeremy Minns, Arthur Grosset, Daniel Davison, Alex Kirschel and Douglas Trent. Particular thanks also to those that helped me with logistics, finance or for miscellaneous reasons including: Raul Filho, Glyn & Sylvia Dawson, Wanda Dameron, Priscilla Brodkin, Kim Garwood and Evan Bowen-Jones.
For the full report including a list of the species seen please visit worldtwitch at: