I went with my family for a "half-term" package holiday to Paphos, staying at the Venus Beach Hotel, half board. We hired a RAV4 for three days - though Hertz gave us an extra day because it broke down on the first day. As our daughter is young we did not try to do a huge amount and we had to cater for all interests. I managed to do some birding, often before breakfast or by calling in at likely sites as we travelled around.

This was my second visit to Cyprus (see also OSME report for March 2000). The birding was interesting but, so late in the season, there were few signs of migration. I used Stagg and Hearl as my site guide. I spent quite a bit of time wandering around the hotel area (right next to the Tombs of the Kings). Whilst not as good as the area around the Laura Hotel (about a mile further west out of Paphos) had been on the last trip, I suspect that this was due to the time of year as well as to the more built-up/building site nature of the area. I came across a dried up stream bed about 400 m west of the Venus which still had a few pools of standing water and supported a luxuriant growth of some palm/reed-like vegetation (sorry, I'm not a botanist). I call it and the immediate area the "wadi", for want of a better name. It held many warblers and, for a couple of days a handsome male bluethroat.

A day by day account would make tedious reading, so I'm just attaching a list of species seen, with comments where relevant. For those wanting to catch up with the Troodos specialities, we found the Persephone trail and the area around the visitor information centre in the village of Troodos productive - seeing the endemic race of coal tit, wren, jay and crossbill without difficulty as well as our only Cyprus Wheatear of the trip.

Stagg and Hearl's "A Birdwatching guide to Cyprus" was very reliable for the sites I visited, with unambiguous directions. The only comment I would make is that access to the Paphos lighthouse area was more restricted this time than on my 2000 visit, when you could even drive into the site. It now officially opens at 8 a.m. (£1.50 ticket from the entrance near the harbour car park in downtown Paphos).

For dragonflies, I used "Guide des Libellules d'Europe et d'Afrique du Nord" by J d'Auilar and J-L Dommanget. It has poor illustrations but I was able to show video clips and digital images to some more experienced odonatists. For butterflies I have "A field guide to the butterflies of Britain and Europe" by LG Higgins and ND Riley. It is adequate but does not cover all possible species. 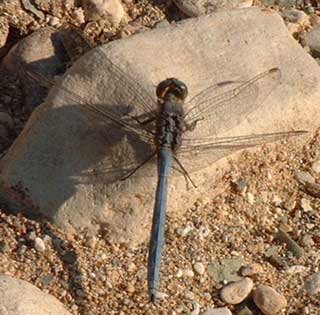 I would recommend a four-wheel drive vehicle to anyone planning to do some serious birding. Some of the roads are very rough.

Useful information can also be found through the Fatbirder website -some may wish to ring the local 'hotline' for up-to-date sightings.

I saw a fox near the wadi; bats were flying around the hotel at night. (Gheckos in hotel and lizards outside)

There were lots of dragonflies but not a huge variety of species. My provisional list is: Scarlet dragonfly (common, including a female which I think was of this species ovipositing in chlorinated hotel swimming pool!); Orthetrum chrysostigma (wadi); Southern skimmer (O brunneum) (wadi); Blue-tailed damselfly; Red-veined darter (Asprokremnos Dam pools and wadi); Trithemis annulata (common at Aspro pools) - sometimes called 'Purple-blushed Darter'; A blue-marked hawker sp. which could have been southern migrant hawker (c3 at Aspro pools).

Thanks to Steve Covey and Adrian Parr for help in identifying some of the insects filmed/photographed.