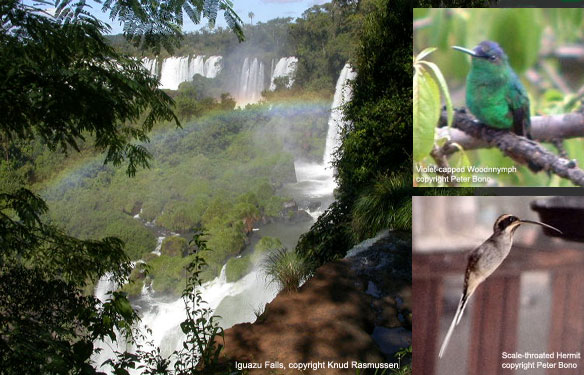 Several months before this trip, a birder named Don asked me to birdguide him together with his closest family members at Iguazu in mid September. The other participants were Lita his wife and Mike, his eldest son with wife Liza. They not only wanted to bird but also see the Iguazu Falls on both sides of the border dividing Argentina and Brazil, this way they would combine their hobby with a worldwide known touristical attraction

September is a very good month to visit this place as daytime temperatures stay fresh and cool in the early morning climbing slowly into a warm pleasant noon and staying so until sunset. Insects activity is low and many of the unpleasant stingers are simply absent thus providing a very nice oportunity to walk unbothered along the trails in the Park's rainforest. Upon our visit the whole area was coming out of a long drought and although it rained during a couple of days before our arrival we did not see any mud on the trails we birded along. September is Spring in the southern hemisphere and so it was at Iguazu. Although most of the deciduous trees still stood leafless, some showed a slight greenish glint caused by the slowly opening of their new leaf buds. Pink Trumpet trees were in full blossom together with their yellow-coloured cousins while neighbouring Coral trees stood showing some freshly opened blood-coloured flowers. High up in the trees many Bromeliads attracted to their flowers hummingbirds and tanagers to drink the morning dew and sweet nectar. Many and different Orchids could be seen blossoming and the Azaleas bushes simply looked like giant pink balls blasting with flowers.

Our hotel had a large surrounding park full of plants and tall native trees. Because of flight delays we arrived at mid afternoon yet still with enough time to see a Plumbeous Kite sitting high on top of a dead tree showing very well its red primaries on the folded wings. High up in the sky but within our binocs reach, we saw flocks of Ashy-tailed Swifts flying with their typical trembling wing beat feeding on insects invisible to us. We decided to visit at once the Castillos family hummingbirds Garden right in central Iguazu town (Argentine side).

The abundance of different hummingbirds at this garden is always fantastic thus we saw all 7 species normal to this time of the year. Big-sized Scale-throated Hermit and the Planalto Hermit were present together with the Black Jacobin and Black-throated Mango. Among the smaller hummers we saw the Glittering-bellied Emerald, the Gilded Saphire and the beautiful Violet-capped Woodnymph. Some other birds visit the place too to take a drink from the feeders so Don managed to see the Bananaquit, a bird he missed seeing while birding in southern Mexico together with other tanagers. Lita was simply amazed when while holding a feeder she was surrounded by swarms of Hummers seeking food. By sunset we saw small flocks of Cattle Egrets flying to their roosting places, mostly tall trees bordering the wooded shores along the Iguazu river.

On the next day we decided to start birding as from early morning. Before breakfast Mike and Don joined me for a birding walk in the park. Here we saw a nice number of birds starting with a Yellow-fronted Woodpecker, Streaked Flycatcher, Picazuro Pigeon, Creamy-bellied Thrush and Magpie Tanager. Once the sun came out, we added close to a Red-rumped Caciques colony a couple of Solitary Caciques and several Violaceus Euphonias fluttering high up in the trees together with a couple of Green-headed Tanagers. After breakfast we went to the Iguazu National Park to bird and see the Falls. Before arriving at the Park's entrance, on the left hand side of the access road there is a small balcony which allows to park and look over a field with a water hole close to the edge of the forest. On the waterhole's border we saw quite a huge native crocodile (Cyacare) basking in the morning sun while quite close in the tall grasses and surrounding bushes a small flock of Smooth-billed Ani were feeding. Close to us a White-tipped Dove landed and started preening while on the opposite side high up in the trees a Chestnut-eared Aracari landed. A group of low and close flying Southern Rough-winged Swallows showed up with a closeby White-crested Elaenia sitting on top of a tree. We left to bird the Park's parking lot before getting into the Iguazu National Park. At this place the Toco Toucans proved to be the show stealers yet by some strange circumstances, Lita never managed to record them on her camcorder. Once in the Park, we went birding along the Macuco trail about 2 miles long. It took us almost 4 hrs. to reach its end birding intensely.

As we entered the Forest along the trail a Ruby-crowned Tanager greeted us feeding with a couple of females in the surrounding bushes. Later we sighted a Spotted Woodquail and a Brown Tinamou held us gasping walking just several yards away from us! High up in the canopy we saw several Swallow Tanagers with the black-masked sky blue males showing very well their white under bellies. Our attention was caught by a noisy small blue coloured bird with a backwards combed bright orange crest, a Blue Manakin jumping back and for th exercising its future lek activities. Trogons could be heard calling but none showed up, apparently they still were reluctant to delimit their nest ing territories. We hurried to catch the last Park's train to see the famous Devil's Gorge at the Iguazu Falls. While walking towards this particular fall, we sighted a Limpkin, the Ringed, Amazon and Green Kingfishers, White-winged Swallow and several other birds species. We still had some daylight so Don added the sightings of Tawny-headed and Blue-and-White Swallows, a Fork-tailed Flycatcher with an incredibly long tail and several Chopi Blackbirds.

On the final day and until noon we went birding and sightseeing to the Brazilian side. In the early morning while we walked along the trails around the Falls, we saw Black and Turkey Vultures taking advantage of raising thermals gliding to gain height. Huge flocks of Swifts were taking off and flying into the clear blue morning sky. Mike was fascinated watching how the huge Great Dusky Swifts would come out or get into their roosting and nesting places on the rock walls behind the falling waters of the Falls. An amazing sight indeed! The weather was fine and we had some fantastic views of the Falls that had all the morning sun on them. Before taking their backflight, a Field Flicker obliged showing on the airport's park to everybody's delight. Don brought a list of about 90 birds he wanted to see so although short on time, during these 2 days I still managed to show him 54 new and different birds species that he happily crossed out from his wanted list

The following is a birds list that enlarges the first one I mentioned in my last year report - Iguazu Falls, Brazil. July 2003.