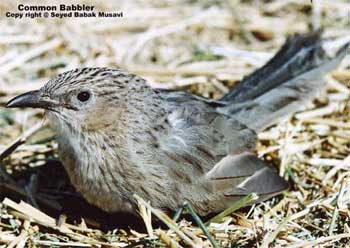 With a land surface of 1,648,184 sq.km, the Islamic republic of Iran is divided into 28 provinces and inhabited by almost 80 million people. One of these provinces is the Hormozgan with 68,475 sq.km and 1 million people. In the Hormozgan, temperatures are normally not below 5 degrees C in winter. The best seasons for trips to this region are winter and spring, while in summer one should try to avoid these parts of the country because of high temperatures of up to 50 degrees C. The national language is Farsi - only a few people speak English. Travelling must be done by public transport or organized tours, since car rental is almost impossible and traffic is dangerous. Ecotour-iran (http://www.ecotour-iran.com/) is the only tour and travel agency in Iran promoting nature trips with well-educated and english-speaking guides.

We have now very definitely left the palearctic proper and are in the desert fringes of the Oriental Region. The star attraction here is the Sind Pied Woodpecker (Dendrocopos assimilis), a species endemic to Iran and Pakistan.

There are four internationally important wetlands and these sites can be characterized as intertidal areas with extensive mudflats, lagoons and creeks, some with extensive mangrove vegetation. These sites are of major importance to breeding, wintering and migrant water birds. 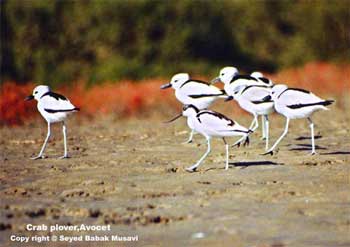 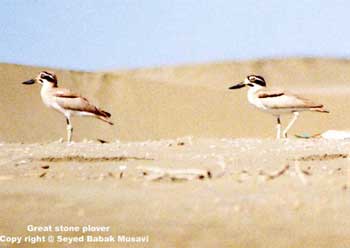 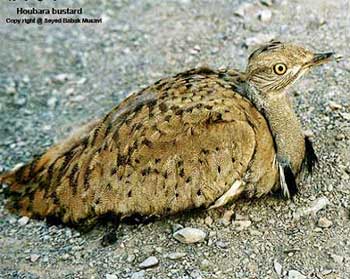 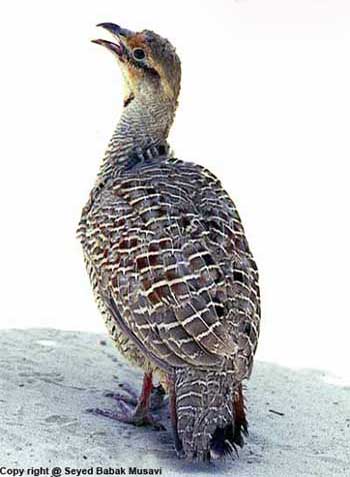 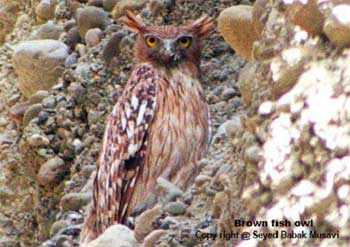 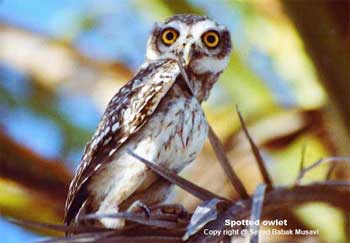 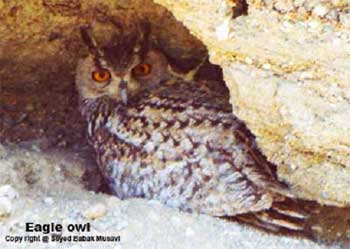 On 3rd June, 1 adult was observed on a cliff along the Rishgir river near to Hajiabad town 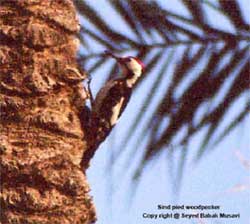 This species is a scarce and local species with a very restricted in south-east Iran (specially in around Minab and Jask town in Hormozgan province) and a small part of Pakistan. It seems to be declining in part of its range. There are several reasons for this decline; it is usually observed around water and the rate of rainfall in the distribution range has been very low during the previous seven years; this species is nesting and feeding in the south east of Iran just on Prosopis cineraria and Acacia spp and Palm trees and some times on Tamarix; recent records in the south-east have decreased in comparision with ten years ago.

My recent records of sind pied woodpecker around Hormozgan province include: On the 9th May, 2 records around Jegin woodland. In the east of Jask town (N 25 44 E 58 12) there is a very good woodland with a lot of Prosopis spp, tamarix spp, Ziziphus sina christi and Acacia spp trees. This woodland is one of the best places for this woodpecker. On the 29th April, 2 records between Gaspir and Miski area (N: 26 8 2/4 ,E 57 15 24/4) .The Palm gardens around of Minab area are another good place for sind pied woodpecker. On 25th April, 1 male in a palm garden mixing with prosopis trees in kuwei village. On the 22nd May in a palm garden (N 27 11 48 E 57 57 39) 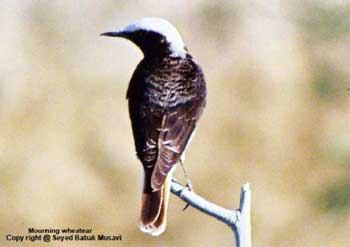 On 29th October 3 mourning wheatears were observed near Jagin river

I am grateful to DR. Derek Scott and Hamid Amini for their assistance.

Mullarney Killian, 1999. The most complete field guide to the birds of Britain and Europe.