With the prospect of the "hardest winter birding in Europe" — owls, woodpeckers and gamebirds as an honourable challenge, five Norwich birders — Dan Brown (Sunbird), Alex Lees (UEA), Simon Mahood (PIMP) Rob Martin (PUNK) and Rich Moores (RBA) visited the country for four days in December 2004. Despite its considerable birding potential outlined at http://www.fatbirder.com/links_geo/europe/slovenia.html, a search at www.eurobirding.com only generates six trip reports, one of which - Mahood (2003) stems from a visit by 2004 team members Brown and Mahood in June 2003. Four days did little to do the country and its avifauna justice and we were unsurprised to miss the likes of Tengmalm’s Owl (Aegolius funereus) and Rock Partridge (Alectoris graeca), but despite the brevity of the mission we were successful in finding some excellent sites and interesting birds detailed below. 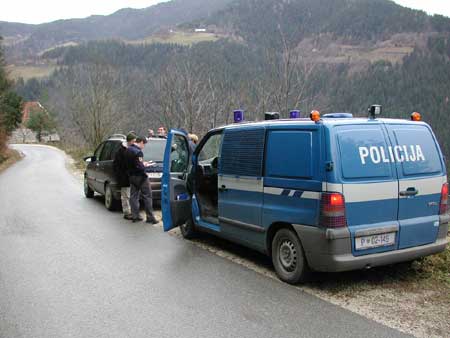 Team members being arrested at Lubjuno — try to ensure your hire car is not Croatian when dazzling owls and farmers in the middle of the night…. (Copyright Dan Brown) 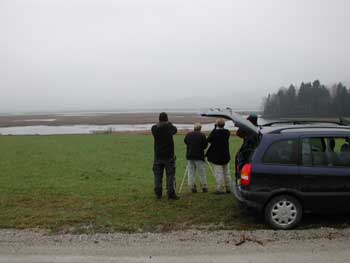 An impressive limestone massif dominating the western skyline of the country. The plateaux rises dramatically and gives way to extensive grassland with stunted copses as well as an expansive forest stretching off to the north east. The site has no official protection and is obviously a popular hunting spot which makes locating the ultimate prize here - Rock Partridge (Alectoris graeca) very difficult. Alpine Accentor (Prunella collaris) and Snow Bunting (Plectrophenyx nivalis) may occur around the summit in winter whilst in spring and summer the area comes alive with the songs of Rock Thrush (Monticola saxatilis) and Rock Buntings (Emberiza cia). 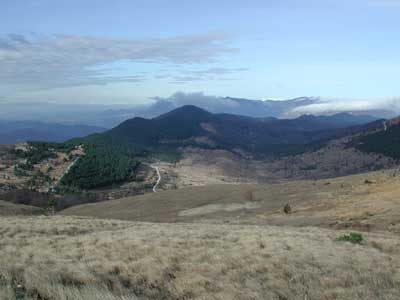 A beautifully fresh alpine valley this area marks the southern end of the Julian Alps and provides some excellent birding. Although 30km long, almost the entire length may produce species of interest, however several sites deserve slightly more attention. In areas of old growth Pygmy Owls (Glaucidium passerinum), White-backed (Dendrocopos leucotos) and Three-toed Woodpeckers (Picoides tridactylus) may be found. Thicker understory often holds Hazel Grouse (Bonasa bonasia) — often an elusive species, however with enough time a likely score. Nutcrackers (Nucifraga caryocatactes) and Black Woodpeckers (Dryocopus martius) are common; however, the latter becomes noticeably more difficult in winter. On a par with Rock Partridge in terms of difficulty is Tengmalm’s Owl (Aegolius funereus). The best chance of this species seems to be around Luce and Dobravlje, however it is rare even here. 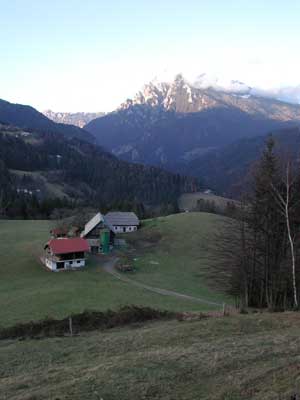 Although not protected the area is heavily managed by hunters, primarily due to the income generated from large game hunting including Brown Bear (Ursus arctos), Wild Boar (Sus scrofa) and deer. This has lead to the protection of pristine areas of primeval beech and spruce forest along the ridge top to the west of the town. Here the commonest owl is Ural (Strix uralensis), whilst Three-toed Woodpeckers may be found by thorough searching of the dead spruces. White-backed Woodpecker occurs at lower densities but the site still offers probably the best chance of this species. 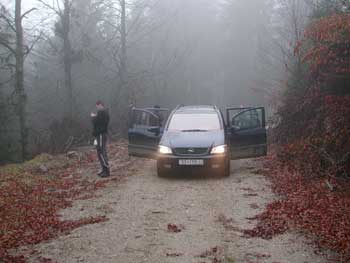 Hazel Grouse Bonasa bonasia
The distinctive wing-whirs and alarm calls of this species were heard from the hills near Lubjuno, where DB & SM found this species in June 2003 (Mahood 2003).
Black-throated Diver Gavia arctica
At least 11 individuals were present on Lake Cerknica, this species winters widely across eutrophic lakes in Central Europe.
Great Egret Casmerodius albus
Three birds were present at Lake Cerknica, most probably from Neuiseedel in Austria or Balaton in Hungary (Tout 1995).
White-tailed Eagle Haliaeetus albicilla
One, possibly two adults and an immature were recorded at Lake Cerknica, these birds apparently use the site as a feeding/staging area year-round but do not breed (BirdLife International 2003). Cerknica also appeared to be a suitable site for wintering Spotted Eagles (Aquila clanga) but we did not locate any in our short stay.
Eurasian Pygmy Owl Glaucidium passerinum
We located at least three calling individuals in the hills above Lubjuno, one of which showed exceptionally well just after dawn. 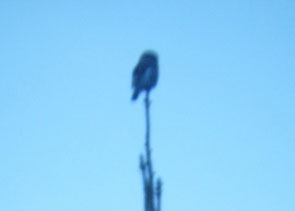 Ural Owl Strix uralensis
Slovenia holds an internationally important population of this impressive species. DB & SM previously successfully found this species along the ridge at Kocevje (Mahood 2003) — Urals are known to competitively exclude Tawny Owls (Strix aluco) from their preferred pre-montane forest (Vrezec & Tome 2004) and this appeared to be this case at Kocevje. We obtained unsatisfactory views of a furtive day-roosting bird mid slope, but despite much effort no calling individuals were located at night.
Grey-headed Woodpecker Picus canus
This species was easily located in floodplain forest at the foot of the slope at Kocevje. 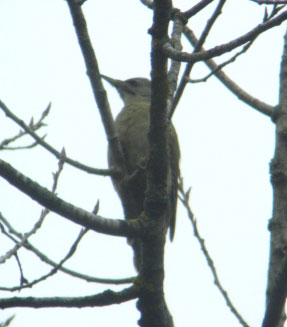 Middle Spotted Woodpecker Dendrocopos medius
A single bird was located in the same area as the above. 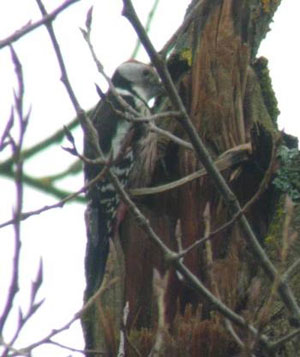 White-backed Woodpecker Dendrocopos leucotos
What was almost certainly this species was glimpsed at Sava. Small populations of the Balkan race lilfordi have been located in virgin forest in central southern Slovenia in recent years and occasional dispersing birds of the nominate subspecies are seen in the north of the country (Tout 1995).
Three-toed Woodpecker Picoides tridactylus
Perhaps Europes most sought-after picid, the extensive virgin montane forests play host to a globally significant proportion of the alpinus subspecies which is endemic to the mountains of Central, Southern and South—Eastern Europe. Because of its dead wood dependence, Bütler et al (2004) considered this taxon to be effective indicator species for forest sites with a high value for other specialised species dependent on dead wood, many of which are red list species. We found at least one pair holding winter territory atop the forested ridge above the town of Kocevje.
Alpine Accentor Prunella collaris
At least three individuals were located wintering on the slopes at Nanos, favouring the rocky escarpment below the radio mast.
Great Grey Shrike Lanius excubitor
Two individuals were located on winter territory at Lake Cerknica and a third was seen by the motorway en route to the airport.
Spotted Nutcracker Nucifraga caryocatactes
We found this species easy to find at both Lubjuno and Sava. 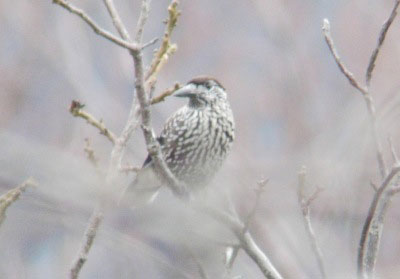 Snow Bunting Plectrophenax nivalis
A single individual was located feeding on the turf by the radio mast at Nanos, here at the southerly limit of the species wintering grounds.