The Ibera Marshes are slowly becoming an internationally popular place visited mainly by naturalists and birdwatchers. This huge oval shaped lowland pan mostly filled with fresh water carrying an enormous number of different vegetation types is found in Argentina some 500 miles to the northeast of Buenos Aires in a province called Corrientes.

About 13 years ago the provincial government decided that in the Ibera area a 3.5 million acre patch should be spared and declared a Provincial Nature Reserve while lately it also has been declared a Ramsar Site, thus stopping all hunting, trapping and casual logging in order to preserve such a fine unspoiled and amazing natural wonder for future generations. The whole area has a very small population living in several villages strewn here and there and in still surviving cattle ranches.

Some very particular conditions make this a very special place. At Ibera, the climate is warm and humid. It often rains yet this never becomes a nuisance mostly allowing birders to bird all day round. Vapours provide sufficient humidity generating feed-back with rains refilling the marshes. The vegetation in every sense is abundant and grows on land and in or under the shallow water in such huge masses that it often helps to build with the entangled reeds floating fertile rafts with new vegetation growing on top of them. Myriads of different flowers attract all sorts of insects, birds, reptiles and amphibians as well as mammals. Another peculiarity found at this place is the presence of three different types of soil, all very close to one another carrying different vegetation and interspersed with water flows sometimes making huge lakes like the 12,650 acres Ibera Lagoon.

At the Ibera Marshes the most popular place for nature and birdwatching is a small village by the name Colonia Carlos Pellegrini found on the shores of the Ibera Lagoon. Several lodges are found there hosting visitors and also providing local services in order to do some fine birding. Starting from mid September and up to early March, over 300 different birds species can be seen here, many of them overlapping from such distant areas as the Pampas, dry south eastern Chaco and the not far away Misiones Rain Forest.

During our last Spring season, while driving from Posadas to the Posada de La Laguna lodge at the Ibera Lagoon, once inside the Provincial Nature Reserve we started to see more and more birds. While the road was going through higher land, we saw in the adjacent fields several Greater Rhea while a couple of Spotted Nothura kept running in front of our truck. Resting on a fencepost was a Yellow-headed Caracara while further on we saw Chimango Caracara, Southern Caracara and Aplomado Falcon. Small flocks of Eared Dove could be seen flying along or feeding on the ground often joined by Picui Ground Dove and the shy White-tipped Dove. Not very high up in the sky we saw insect-hunting Brown-chested Martin and White-rumped Swallow. Getting closer to the Lagoon meant having roadside ditches and starting to see more often tall grasses, reed beds and some distant open water. Now birds could be seen everywhere! A Jabiru together with some Maguari Stork and American Wood Stork were suspiciously eyeing us while a flock of White-faced Ibis were feeding frantically. Not very far away several Bare-faced Ibis together with a couple of Plumbeous Ibis stood frozen as if waiting for something to happen. Cocoi Egret, Snowy Egret and Cattle Egret could be seen everywhere often joined by the beautifully coloured Roseate Spoonbill. Flocks of White-faced Whistling Duck and Brazilian Duck would fly away while couples of Southern Lapwing stood loudly calling getting a hoarse reply from several Southern Screamers. A pair of tail-wiggling Giant Wood Rails quickly ran into the reeds seeking shelter while a Chicli Spinetail hurriedly hid in the tall grasses. Meanwhile on the fence-wires we saw sitting Saffron Finch and Rufous-collared Sparrow while balancing on the grass stems close to the panicles we saw feeding Double-collared Seedeater and Rusty-collared Seedeater. While driving on, sitting on another fence post we saw several Field Flickers playing among themselves hide and seek. Upon arrival to the Lodge, we were greeted by a Red-crested Cardinal and in a nearby tree we saw a Golden-billed Saltator and a Greyish Saltator not far away. Considering that we had still a lot of daytime, we went for a walk around the Lodge's park. This allowed us to see a Squirrel Cuckoo and a Dark-billed Cuckoo while feeding under a bush we discovered several Ruddy Ground Dove. Insects flying in the late afternoon attracted such birds as Great Kiskadee, Tropical Kingbird and Vermilion Flycatcher. Now it was getting dark and to our delight several nighthawks flew along. It wasn't difficult to identify the large sized Nacunda Nighthawk with the Scissor-tailed Nightjar and the Pauraque. After dinner we went owling and saw the Tropical Screech Owl, Burrowing Owl and Short-eared Owl. While walking back to the Lodge on a fence-post the glint of the red eyes gave away a Little Nightjar apparently taking a rest.

Starting early on the next morning, we took a boat ride along the shores of the Lagoon. Flocks of birds were coming out of the reeds and we saw Unicolored Blackbird, Yellow-winged Blackbird and Scarlet-headed Blackbird. Walking among the water lilies' leaves many Wattled Jacanas were seen feeding with their chicks. Also feeding on high-flying insects we saw Grey-breasted Martin, Blue Swallow and Cliff Swallow. 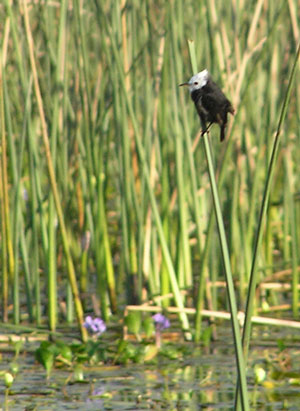 Now we were drifting along the lagoon's shore and from time to time we were preceded by Amazon Kingfisher and Green Kingfisher. At a place, when turning around some reeds we were greeted by a loud calling Donacobius and then found a hanging nest of a White-headed Marsh Tyrant with the parents feeding the chicks. Many Snail Kites were seen so we supposed that these had a good supply of snails around. While going through open water we were investigated by a Gull-billed Tern and not far away a couple of Yellow-billed Tern were taking dives at fishes invisible to us. We now arrived at a group of trees growing not far away from the water. Several Neotropic Cormorant sat drying their wings while an Anhinga took off. In the branches of a tree we discovered a Great Black Hawk resting and upon our departure a Black-collared Hawk arrived landing on top of a broken palm tree. Farther away we discovered a couple of Muscovy Ducks flying and then landing on a large tree branch.

On we went, looking this time for Rufous-sided Crake, which we heard calling not far away. It obligingly showed up at almost a handshaking distance! Quite close by there was a little sand bar and on it we saw feeding Pectoral Sandpiper, Lesser Yellowlegs, Common Snipe and Azure Gallinule. When going back to lunch, several Great Egrets were seen while a Ringed Kingfisher on top of a pole ignored our presence so concentrated it was on fishing. Now thermals were going up and we saw Black-headed and Turkey Vultures slowly gliding seeking height. We then discovered a Lesser Yellow-headed Vulture trying to catch up with the rest. Just before lunch we saw Rufous and Creamy-bellied Thrush and a Variable Antshrike. A blossoming vine attracted several Hummingbirds that seemed more concerned at chasing one another than feeding. Anyway we saw Black-throated Mango, Glittering-bellied Emerald, Gilded Sapphire and Blue-tufted Starthroat. After lunch we decided to go out into the fields in a higher land area. Now we saw Pinnated Bittern, Rufescent and Fasciated Tiger Heron. Impressive birds! While slowly driving along the road, we saw Striped Cuckoo and Smooth-billed Ani. A bit farther away majestically sitting on a pole was a Savannah Hawk. Then on some tall grasses we managed to see a Strange-tailed Tyrant and nearby in a field a Tawny-bellied and Dark-throated Seedeater showed up. Fork-tailed Flycatchers were busy pursuing one another. In a nearby tree a Green-barred Woodpecker was calling nervously while a Spot-winged Falconet flew over us.

We then drove into an area with local Mesquites and Acacia trees and thorny bushes among others. A White Monjita greeted us, followed by a Yellow Cardinal. On we drove to discover in an adjacent field, flocks of Brown and Yellow Marsh birds, Yellow-rumped Marshbirds and the rare Saffron-cowled Blackbird! Close to some trees we saw a Firewood Gatherer and then Narrow-billed and Scimitar-billed Woodcreeper.

The loud greeting call of a couple of Brown Cacholotes gave them out and we saw them in detail. At another group of trees we discovered a whole family of White-barred Piculet, Checkered Woodpecker, White Woodpecker and Little Woodpecker. Sitting on a completely dry branch as if showing its beauty sat competing a Purple-throated Euphonia with a Red-crested Cardinal.

On our trip back to the lodge a Lark-like Brush-runner obliged while upon arrival we saw Picazuro and Spot-winged Pigeon flying around seeking a place to roost. That late afternoon a flock of Monk Parakeet fared us good night.