Birding the Antarctic by George Cobel


This is a condensed review of our December 25th 2000 - February 1st 2001 trip to Argentina, the Falkland (Malvinas) Islands, South Georgia Island and the Antarctic Peninsula and Islands.

We added 121 bird species to our world life list plus four whale species (Minke, Fin, Southern Bottlenose and Humpback whale) and five new seals (Southern Elephant, Weddell, Crabeater, Antarctic Fur and Leopard). Many other species of whales were sighted by the experts on our ship but we weren't on deck when they were seen.

We left Traverse City mid-day on Christmas and flew to Miami where we spent the next two days birding in the Everglades National Park. On the night of the 27th we rendez-vous'ed with The Cheesemans' Ecology Safaris group at the Aerolineas Argentinas airline departure gate and flew overnight to Buenos Aires. We then flew about 2 hours further south to Argentina's southernmost city, Ushuaia ("U-shoe-why-ah"). There we hotel'ed for the night, had a lamb dinner and finally got some sleep after 11 hours of flight time plus several of transfer time. The next day we bus toured the area including a national park that includes the southern end of the Pan-American Highway. We saw many birds including several Andean Condors and a flock of Austral Parakeets. We were also treated to an Argentine lamb BBQ and a Gaucho dance demo for lunch.

Late that afternoon we boarded the Mariya Yermolova, our ship for the trip south. It had the following statistics: length = 384 ft, width = 60 ft, draft = 19 ft & cruising speed = 14 knots. Its registry was Russian as was the crew. As a result we were able to refresh the small Russian vocabulary we acquired during our 1993 adventure in Russia. Our group included 93 participants and 16 leaders who were combination naturalists, lecturers, Zodiac drivers and one was even a physician.

Our first goal after leaving Ushuaia via the Beagle Passage was the Falkland (Malvinas) Islands and the trip required two full days. Once there we made three Zodiac landings on New, Carcass and Steeple Jason Islands over two days. Steeple Jason is the home of a huge, >500,000, nesting colony of Black-browed Albatross, a bird with a 90+ inch wingspan. Later on the trip we visited the nesting sites of the Wandering Albatross that has a 10 to 12 foot wingspan, the world's largest. 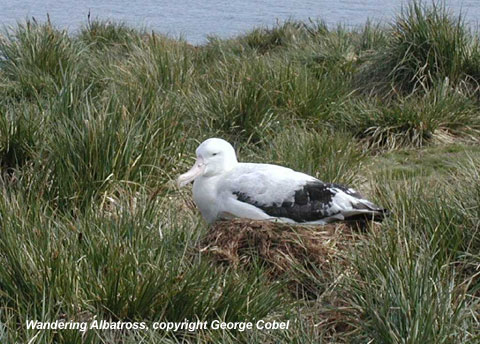 In these three visits we logged the first three of the seven species of penguins we ultimately saw, Magellanic, Rockhopper & Gentoo. We also saw our first huge Southern Elephant Seals that were completing their breeding cycle and annual molt. While in the Islands we celebrated the true start of the 21st millennium with a big party on board. Our next stop was the Port of Stanley, the Islands capital, where we took on water and fuel since we would be at sea for the next three weeks.

Our next goal was South Georgia, one of the most remote islands in the world. On the way we started to see the first of many beautiful icebergs during the two day cruise from the Falklands. We spent a week exploring this starkly beautiful island that was once the home of a busy whaling settlement, Grytviken that we also toured and viewed the remains of the whale rendering plant. Almost everything of the carcass was used and even the bones were sold for fertilizer. Over a million whales were processed here and operations stopped in the early 1960's. Here we added the King, Chinstrap and Macaroni penguins to our list and learned how to fend off aggressive Antarctic Fur Seals; you tickle their whiskers with a bamboo stick (supplied) or your walking stick. Our daughter Sandra had given us some neat foldable walking canes which really were put to good use as the footing was often treacherous and the seals aggressive in defending their harems. 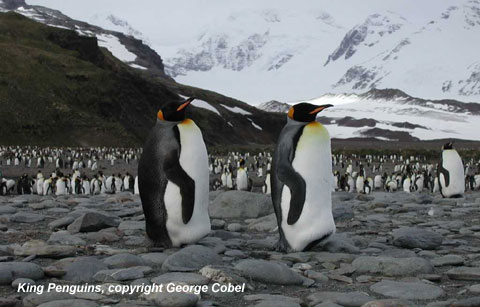 On our next to last landing one of our party fell on a steep hill that we had climbed with some difficulty and broke her ankle. Our doctor then discovered that our medical supplies had been robbed in transit of her supply of morphine and the decision was made to return to Grytviken and transfer her to a British Antarctic Society research ship so that she could be returned to Stanley for medical care and a return home. During the short return voyage we were treated to a fantastic sunset over the island and a full moon over the glaciers and icy mountain peaks.

After leaving South Georgia we had a three day cruise south to the South Orkney Islands. Our cruise times were always filled with lectures on what we would be seeing next, photographic and art lessons, geologic information, slide and video shows. In addition, one of the staff had spent part of his career as a member of the UK exploration party years ago and he shared his experiences with us as well as relating the stories of others such as the Shackleton saga. Unfortunately, the Orkneys were icebound and we were unable to get close enough to land so it was on to the Antarctic Peninsula and Paulet Island where we identified our seventh penguin, the Adelie. The only species in Antarctica not seen on the trip was the Emperor, the largest of the penguins that nests further south on the Antarctic continent. Here we also added the rest of the seals seen.