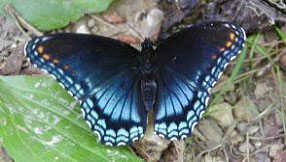 A short business trip with a couple of days for birdwatching. The main targets were warblers. I was hoping for 15-20 lifers and about 100 species.

Upon arrival the previous night I rose early and drove to Cades Cove, in the Great Smoky Mountains. Due to a sports injury walking was difficult, so I took the auto tour and did not venture too far from the car. On recommendation by one of the wardens, the pool was visited but a few stops on Sparks Lane, tufted titmice were everywhere. I met another birdwatcher who pointed out some calls of tanagers and vireos but I was unable to find them. Chipping sparrows were everywhere.
I located an unusual sparrow, a Bachman's and this was confirmed by the other birder - a rarity in these parts although he was familiar with them - a real find. Eastern bluebirds and meadowlarks were common along Sparks Lane and I located a carolina wren. I turned onto the main route, pulled in at the vehicle no entry sign and walked the short distance to the holding pool. There were 4 pairs of wood ducks with ducklings on the pool along with some canada geese, and an eastern phoebe. Great crested flycatchers were flycatching from the fence, and a white-tailed deer came close.
I drove the rest of the route stopping occasionally to view deer and many common birds like white- breasted nuthatch, dark-eyed juncos, cardinals, pewees, indigo buntings and kingbirds. I stopped near the end of the tour at dusk, watching the deer and a coyote. Barred owl and screech owl were calling, but were too far away.
Sunday 23rd May

At Newfound Gap, lots of house finches were around the car park and a yellow-bellied sapsucker was easily located. A small flock of birds though mobile was eventually located and were pine siskins. Nothing else of note so I moved on to the Sugarlands trail. A wild turkey was walking along the side of the road, and along the Sugarlands trail a confiding ovenbird was calling. At the visitors car park american goldfinches and mockingbirds were abundant. I walked the Sugarlands visitor centre nature trail and only common species were located before the heavens opened. I drove back to Cades Cove and did another lap of the tour. Carolina chickadees were common along Hyatt lane. A red-breasted nuthatch was found on the Cades Cove nature trail.

A hard day of work allowed no birdwatching at all.

I only managed an hour in the afternoon at the hermitage a country house not far from the hotel. It was quite productive. A black and white warbler was obliging, tree swallows, chimney swifts joined the barn swallows in the air, brown thrashers were feeding their young in the bushes and on the lawns.

I rose at dawn and went to Long Hunter State Park for 1.5 hours before breakfast. I was able to walk a lot more now and took the 2 mile trail around the lake, a green heron was located along with several great blue herons. Titmice and chickadees along with cardinals were abundant. Blue jays were noisy and I located a family of yellow-billed cuckoos in the bushes. Canada geese were on the lake with lots of goslings, and I stumbled upon a deer with a fawn and an orchard oriole. I walked the other trail 0.5 mile long. Eastern towhees were common.

I managed 1 hour in the evening at Radnor lake an excellent place and well worth the visit. A least bittern flew over the car park, american goldfinches and swallows were common, gnatcatchers and a least flycatcher were flycatching along the trail. Deer were common and I located several bewick's wrens along the trail. I found three summer tanagers quite easily and as I passed across the wooden bridge a large bird flew past and perched 10 feet away. It was a barred owl and I perched until I left 10 mins later. A wood thrush and warbling vireo were drinking from the stream below and I located a strange pewee call, it was a flycatcher - yellow bellied. Over the lake along with the vultures an osprey and a broad-winged hawk were soaring the thermals. A nondescript bird caught my eye - a scarlet tanager. There were lots of snakes and a muskrat.

After a busy day I went to Mammoth Cave state park in the early evening, looking for blue-winged and bay-breasted warblers to no avail but lots of turkeys and an excellent pileated woodpecker. I went to Quarry road watchable wildlife area. A few paths lead from the car park, 20 mins here produced a pair of blue grosbeaks, bells vireo an excellent find and a scarlet tanager.

Most of the day was spent on Lookout Mountain doing touristy things, a pair of groundhogs was the only thing of note. When I did start birding at Cravens house a massive thunderstorm started so I gave up and drove to the Pot house - a field studies centre. Here I waited until the rain stopped. The birding was excellent yellow throated warbler and red eyed vireo from the car park, the house opposite had a hummingbird feeder to which 8-10 ruby-throats were feeding off and on. Northern flicker and downy woodpeckers battled with a summer tanager for the prime singing post. Chickadees and gnatcatchers were everywhere and I located an american redstart but no cerrulean warblers which was the main objective.

The last day was a dawn start at Chester frost park, mockingbirds and chickadees were abundant and barn swallows were collecting mud from a puddle, the first song sparrows of the trip were singing from a bush. A yellow-throated warbler was conspicuous and I got excellent views of a pine warbler. I eventually located one of my goals - two brown-headed nuthatches on a pine tree. The park was alive with birds, cardinals, grackles, thrashers, mourning doves, cowbirds, crows, jays, robins, bluebirds, goldfinches, gnatcatchers, house finches to name but a few. I eventually found my goal a red-headed woodpecker. I had one last stop before getting my flight. I went to the Brained Levee, a small marsh area. Green herons and great blue herons were very common here, some mallards and their ducklings were on the marsh. The other side of the park is a field area bounded by a river which produced field birds, meadowlarks, doves, starlings, grackles etc. Barn swallows, sand martins and cliff swallows were over the marsh, and lots of killdeer were abundant along the waters edge. A hooded warbler was on the woodland edge and a belted kingfisher the last bird of the trip. 17 lifers and 82 species was not too bad for a short business trip.

Directions and more info on the birding sites I visited can be found at http://www.tnbirds.org/birding_tn.htm