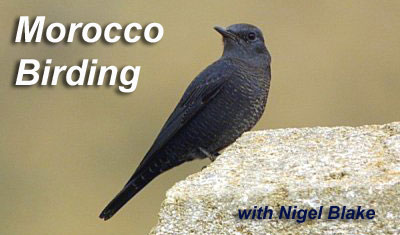 
Over Christmas Steve Blain and myself took a late internet booked, 7-day cheap trip to Morocco. We were based in Agadir at the hotel Kamal, so we were somewhat restricted by the distance that we could travel. However, with a hire car we did manage to clock up some 1600 kilometres and the sites we went to were all day-tripable if we left early in the morning.

Driving in Morocco is a very "seat of the pants" experience and we had our fair share of near misses - driving at night is tantamount to suicide! Moroccans in dark clothes on black bikes and mopeds with no lights in total darkness are difficult enough to see, add to that donkey carts and "Kamikaze" style driving...HELP, but we managed to stay in one piece.

The first morning was taken up sorting out the hire car, then in the afternoon we went to Oued Sous, a river estuary just south of Agadir. Target bird number one; Moussier's Redstart was soon ticked along with the Mauritanica race of Magpie, a good start to the trip. We also picked up Bonelli's Eagle, Osprey, Glossy Ibis, Red-rumped Swallow and a huge flock of 600+ Serin. 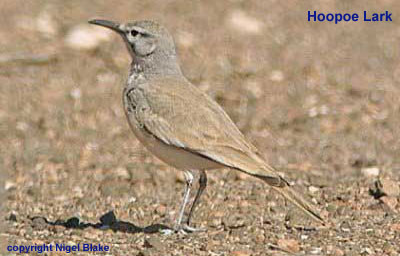 Day 2 was a long haul over the anti-Atlas mountains to Goulimime collecting Desert, Red-rumped and Black Wheatear on the way, plus Crested and Thekla Lark, Spotless Starling and Spanish Sparrow. Once there we also managed to find another target bird, Hoopoe Lark but dipped on Cream-coloured Courser. We had expected to see many raptors here but it must be the time of year for them to be further south. 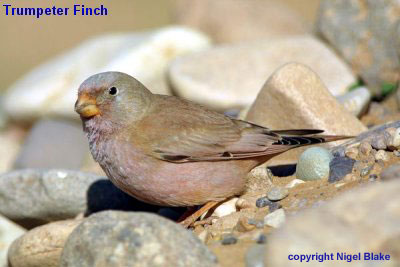 Trumpeter Finch was fairly abundant though and a few posed for pictures within about 12 feet. We stopped at a few wadi's on the way there and on the way back. Most were productive with Tristram's, Sardinian, Spectacled and Scrub Warblers giving themselves up for us, as well as Bluethroat. On the way back we went back to Oued Sous to look for Red-necked Nightjar. No disappointment here as we got stunning views of one in the headlights. 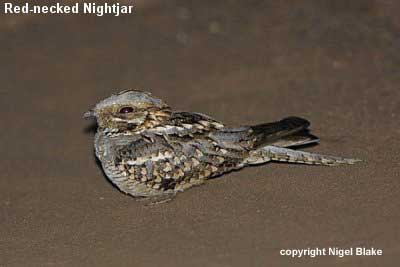 Also Black Crowned Night Heron hunting in the dark and great images to prove it. A Barn Owl put in a brief appearance too. 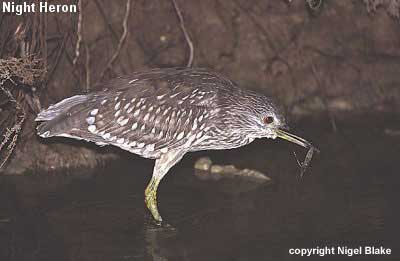 Over the next three days we went to Oued Massa for some pretty thrilling birding, but still dipped on the Courser (apart from a distant single bird in flight). However, Pin-tailed Sandgrouse, Laughing Dove, Marbled Duck, Grey Phalarope, Saharae race Little Owl, Audouin's gull, Glossy Ibis, Black-crowned Bush Shrike, a good few raptors such as Long-legged Buzzard, Common and Lesser Kestrel, Hobby and Marsh Harrier plus a very tame male Moussier's Redstart made up for what we missed. In the village and local farmland we managed good views of House Bunting and Blue Rock Thrush, Common Bulbul, Black-eared Wheatear and Cirl Bunting. 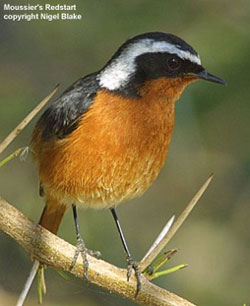 We did a circuitous trip via Taroudannt and Aoulouz which was nice scenically but hard work birding. Mainly more of the same things, Barbary Falcon being a highlight. Also many Yellow Wagtails, Finches and Larks showed well and we got good pictures of Black and Moussier's Redstarts.

The Day we went to Tamri was excellent as we saw 52 Bald Ibis on the cliffs north of the town plus Lanner Falcon. We also managed to see, Blue Rock Thrush, Hoopoe and Brown-necked Raven here.

On the whole it was a good trip with 142 species being the end tally. On the down side we got pestered a great deal by the locals making photography very frustrating. However it was never threatening. Morocco has a terrible litter problem which spoils the landscape immensely. Even in the desert plastic bags and bottles were everywhere. 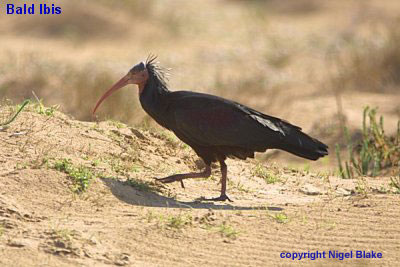 A complete site-by-site bird list and over 60 images can be seen on my web-site www.nigelblake.co.uk